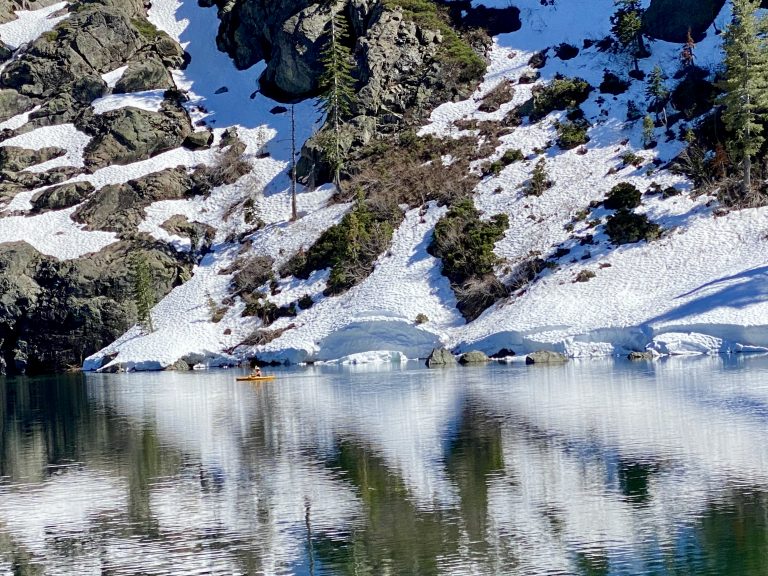 It had been six weeks since we began sheltering in place due to the coronavirus and we needed to get out. We’d come back from a week in Death Valley just as states were beginning to lock down and found ourselves stuck. We had to cancel a planned month-long trip to Italy, Croatia, Montenegro and Bosnia and we were supposed to be on the plane today. Instead, we searched our California maps and decided to go north. Northern California (as opposed to San Francisco, which is really central California) is full of forests and lakes and mountains – and importantly, few people. We wanted to be socially responsible so we packed all the food and water we would need so we wouldn’t have to be anywhere except in our truck and the wilderness. With a 600-mile range, we wouldn’t need gas either.

There were many choices but we decided on a waterfall themed trip. We found a loop that would take us to as many as 13 waterfalls, though our two-day getaway wouldn’t give us time for all of them and some were closed do to coronavirus. We’d save some for another day.

We packed the night before and because it would be a shorter trip, we didn’t need the big rooftop carrier – everything fit inside the truck. As we laid out what we would be eating, it became obvious that foodies we were not. I like a great meal as much as anyone, but I don’t live to eat, as they say. We want easy to make and easy to clean up tasty food that’s reasonably healthy when we’re camping. We’re all about the hiking and the views and finding how to get both; food allows us to keep going but we don’t want to waste time on it. On the counter was canned turkey chili, a couple of boxes of mac and cheese (Amy’s Organic, not Kraft since I do have some standards), some chicken sausage, chips, eggs, bread, clarified butter (which doesn’t have to be refrigerated), and sandwich makings, along with some snacks, especially the ubiquitous pretzels that Susan can’t seem to live without. Sometimes I think that’s pretty much all she eats. We tossed in five gallons of water, a small backpack with first aid kit, emergency food and a personal locator beacon (PLB), along with a couple of bags of clothes and we were ready.

We were on the road by 10 am and the day was glorious with the blue skies and warm temperatures our part of California is famous for. We passed through the small town of Los Molinas that was recently slapped for trying to open some businesses too early, and finally hit the interstate at Red Bluff. At about that point, the snow-covered volcanic mountains of the northern Sierras started to come into view—first Mt. Lassen off to the east and then Mt. Shasta ahead to the north. There is an odd weather phenomenon as you travel through that part of California – it gets hotter the farther north you go, even though the elevation is the same or even higher. When Chico is 80 degrees, Redding is often almost 90. Eventually, we needed some AC.

Driving north through Redding and then crossing over giant Shasta Lake, the landscape changed and became mountainous. Soon the interstate slowed around curves and wound around valleys and hills. After climbing a couple thousand feet, we exited the highway near Dunsmuir, where there was a waterfall we had to see. Hedge Creek Falls is one of those rare falls that you can actually get behind and watch it spill in front of you. But it was not to be, as the county had closed it due to the lockdown. We searched for a different way in to no avail. Because the falls are close to the highway, we knew we could stop again someday when restrictions were lifted.

Another ten miles down the road, we turned off at our next stop, Faerie Falls. A mile walk up a narrow road that became a trail brought us to a thundering fall that emptied into an inviting swimming hole (no swimming for us today though, as the water had been snow only a few hours before). There was something that felt spiritual about the falls. It was an intimate setting surrounded by high fern-covered rock walls and warm boulders to sit on while contemplating. 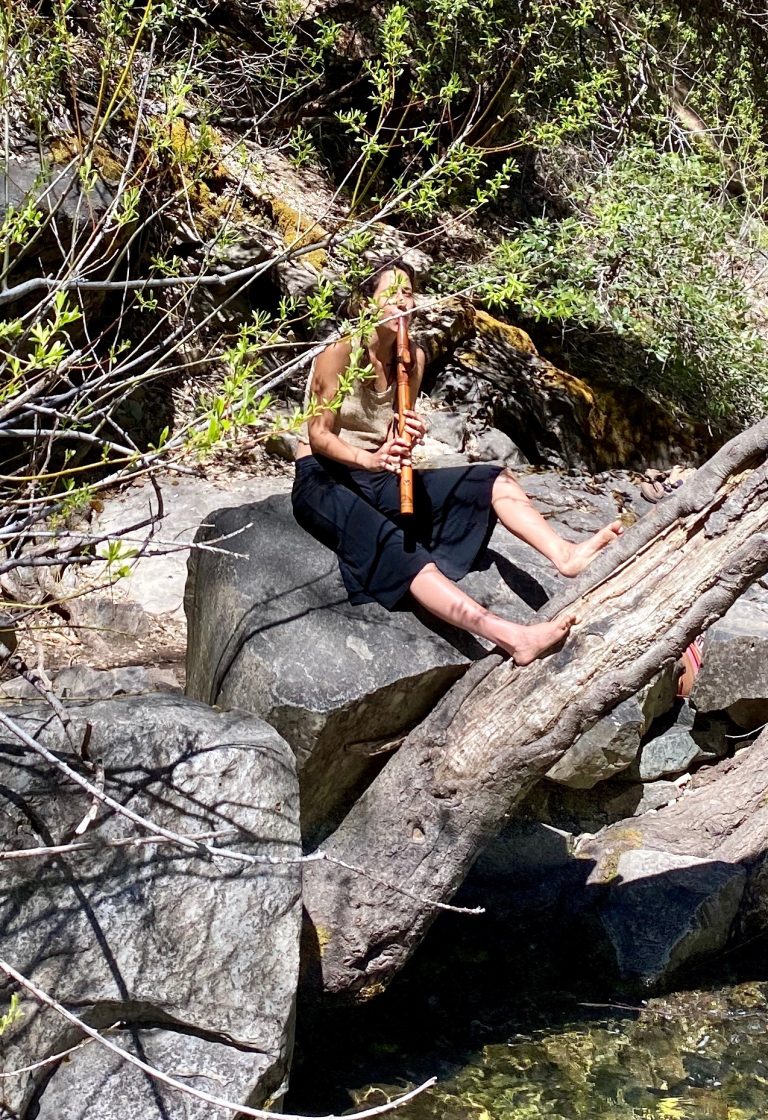 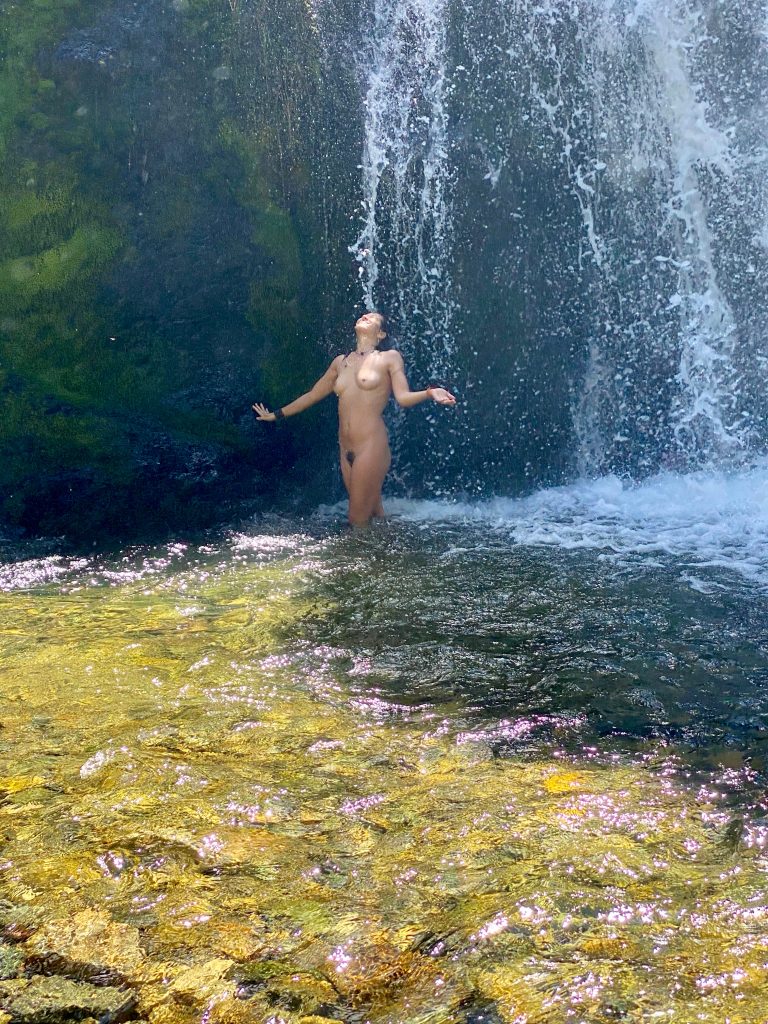 Not long after we arrived, two twenty-something girls arrived and greeted us. The girls then scrambled on some rocks behind us, one took off her clothes and waded in the frigid water while the other played a beautiful melody with some type of recorder. It was obvious they came here for the spiritual feel of the place. The musician eventually removed her clothes too, joined her friend, and they laughed, splashed and danced completely naked under the falls. Faerie Falls was aptly named.

After dipping our feet in the cold water, we hiked down the trail, noticing that ever-present Mt. Shasta peaked out between the trees in the distance.

We drove back along the good forest service road and noticed an excellent level spot where we could bring the truck to camp, with the rushing creek that came from the falls within earshot. It would be ours if we didn’t find a better one. But I’d seen a road on my GPS that went to a small lake not far away and we headed there to see it before deciding. We were surprised at the quality of the paved forest service road that brought us to Castle Lake.

Even more of a surprise was the lake itself. It was one of the most beautiful lakes either of us had ever seen. While the shoreline where we parked was covered with old growth pines, cedars and a few redwoods, the other side of the lake, maybe a half-mile away, was a steep snow-covered granite mountain with a waterfall cascading down the center. It was breathtaking. 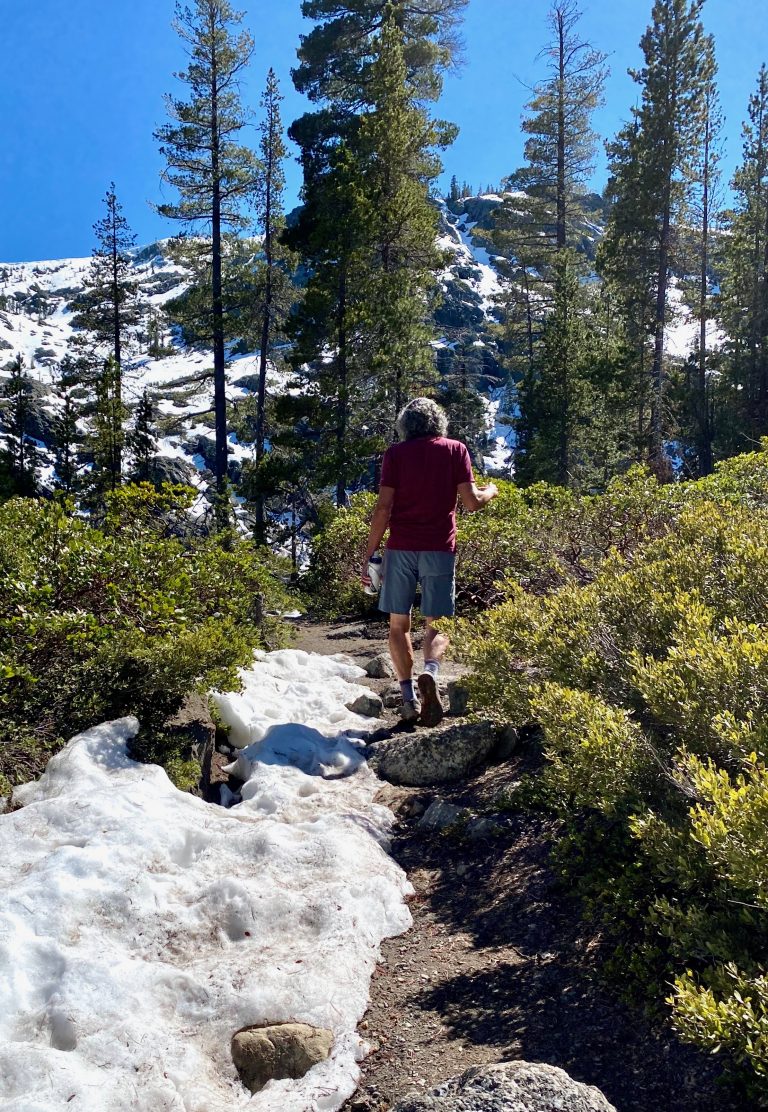 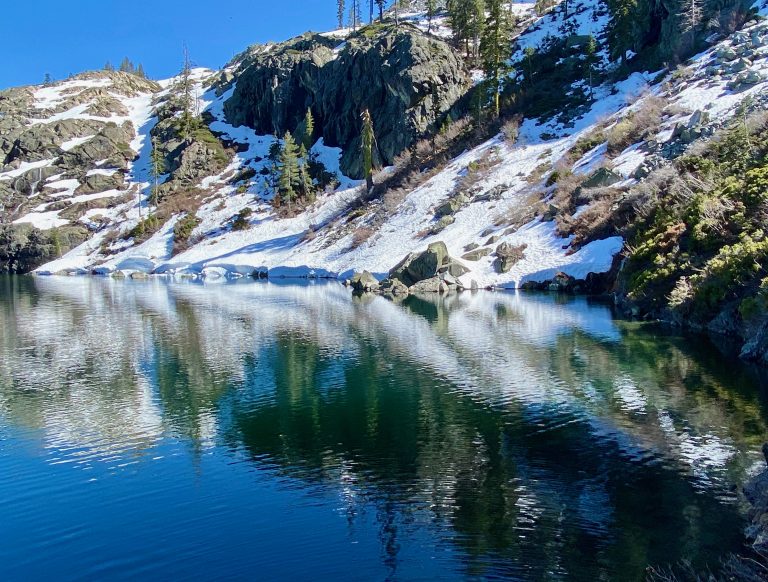 We hiked a partially snow-covered trail that went around about half of the lake’s perimeter to get closer to the waterfall, which we knew was inaccessible due to a dozen feet of snow surrounding it. By the time we reached the end of the trail, we had found no fewer than four more small waterfalls. We were mesmerized by the beauty of the reflections of the snowy mountains on the crystal clear water.

The lake, like Faerie Falls, had a spiritual peaceful feel to it. We could imagine that for half the year, the area was totally snow covered and inaccessible, only reachable in the summer months. We decided that we would return soon with our kayaks for a more imitate encounter.

We left the lake and slowly came back down the road looking for a place to camp. The Forest Service’s adjacent Castle Lake Campground was closed due to coronavirus. Surrounded by national forest, we knew we’d find something, but we wanted amazing. We found it off a dirt road that led a short way to a large multi-level sandy area that felt like a maze, surrounded by six-foot high bushes with several places available for camping. Some campers were already in the area, so we weren’t sure we’d find a good spot. We saw a short road up a steep rutted hill that led to an unoccupied area, so we parked at the base of the hill and scouted it out. It was definitely worth heading up the steep path. As I tried to drive up the hill, the rear wheels spun part way up. Many good spots require 4wd to access and this was one of them. I engaged 4wd and lurched up the sandy hill with Susan guiding me just ahead to a level, secluded campsite. The site was made particularly special by huge Mt. Shasta, only 10-15 miles away, looking as though we could almost touch it. Heavy snow covered at least half of the mountain, and its 14,000-foot peak loomed over everything around it. We positioned the truck to take best advantage of the view and ate dinner while basking in the warm sun, Mt. Shasta regally looking over us.

After dinner, we took a walk through the open forest, discovering rivulets of a rushing stream amid the tall trees. 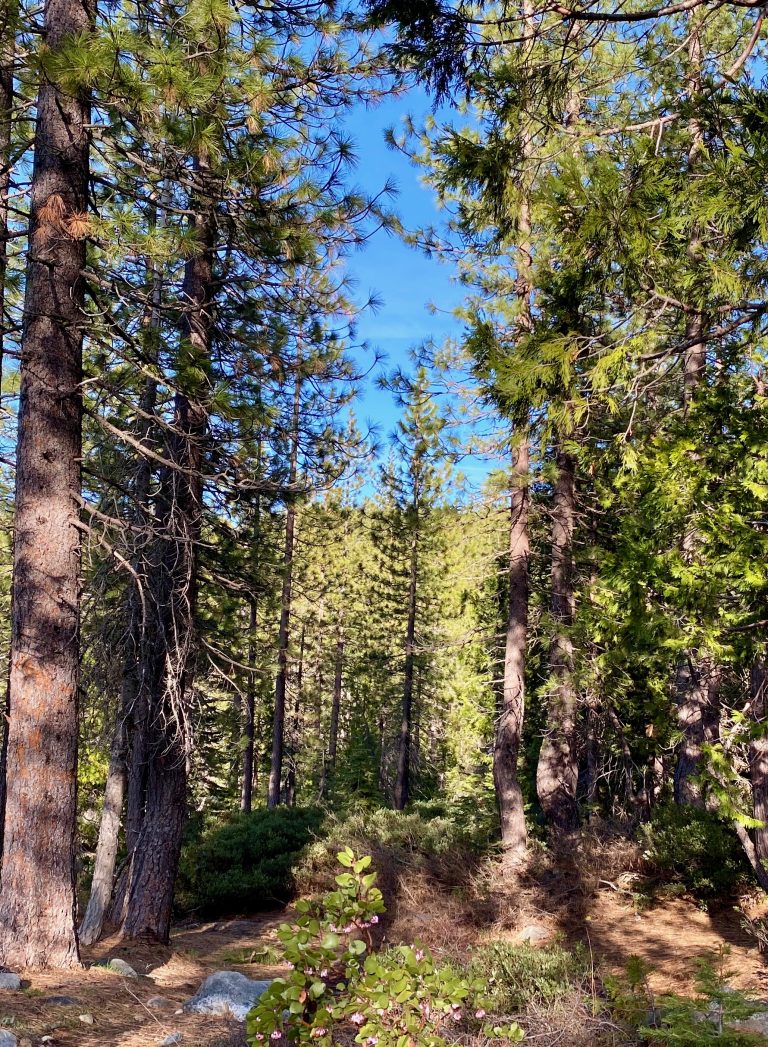 At 5,000 feet elevation, as soon as the sun went down, it got chilly so we went inside the truck where the mountain was framed through the rear window and we fell asleep to the small rushing creek a hundred yards away.

PrevPreviousPost #25: Home is on the other side of the mountains
NextPost #27: A waterfull day – a lake, a spring, a river, and three waterfallsNext