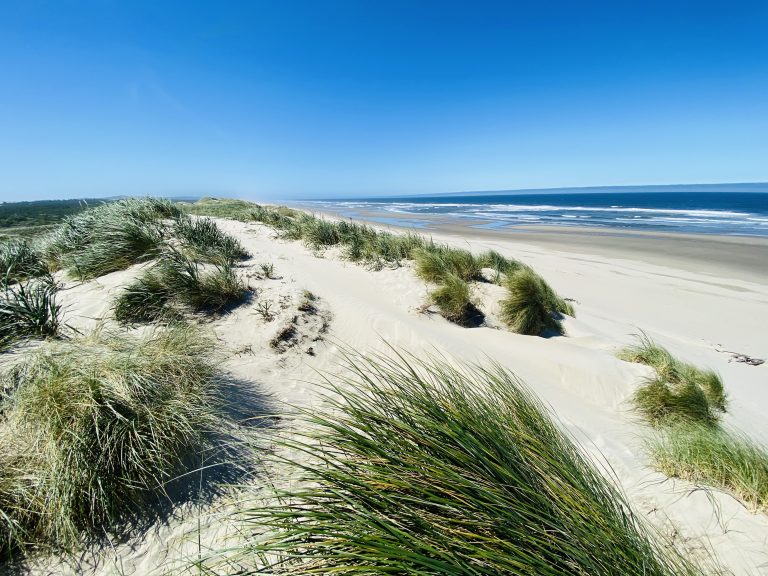 When I woke up, I knew I wanted something hot for breakfast. The wind had mostly died but it was chilly and the sun was filtered through a broken fog bank. Oatmeal saved the day. I smiled to my self thinking we had another a short drive ahead to allow us to explore and stop wherever we wanted.

This part of the Oregon coast has an unexpected landscape of miles upon miles of giant sand dunes that stretch inland, driven by the constant wind. We turned off of Hwy 101 and followed a road to Oregon Dunes National Recreation Area. Some of the dunes are set aside for off-road vehicles to play in and some near the ocean are strictly for hiking on foot. A four-mile road parallels the coastal dunes with numerous parking areas with sandy trails that lead up into and over the 50-foot dunes to the beach. 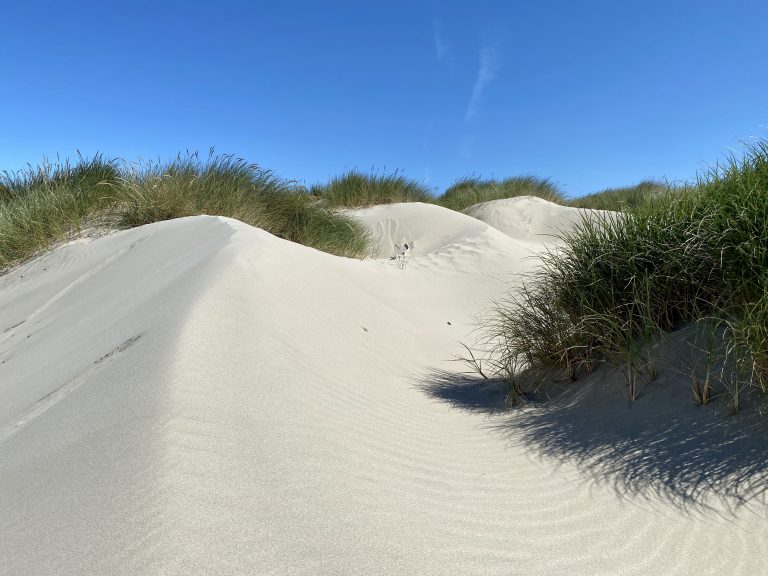 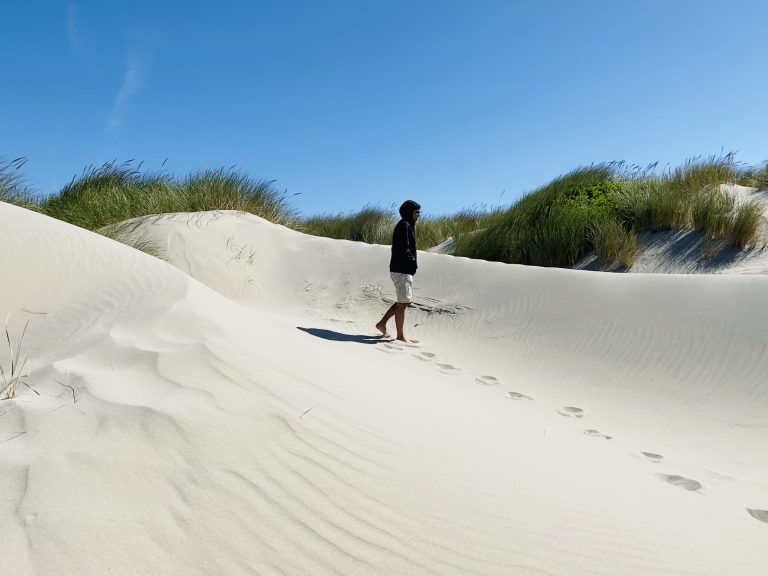 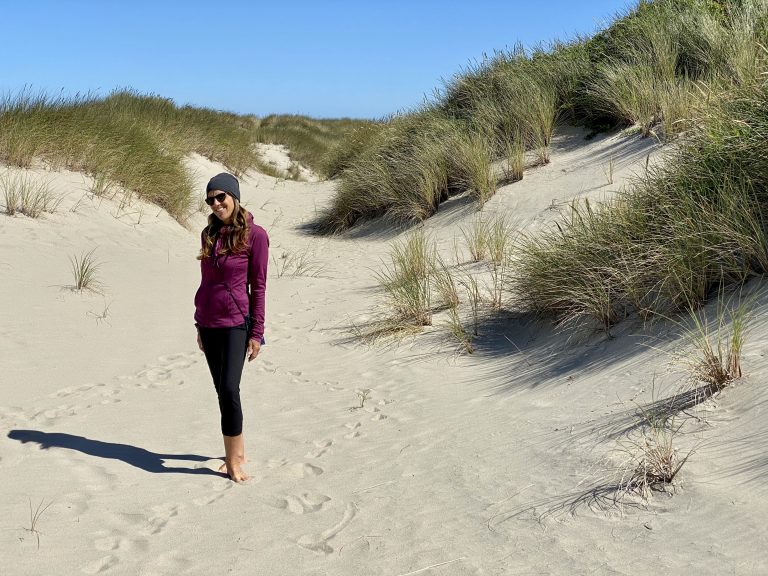 We stepped out of the truck at one parking area close enough to the dunes to walk to them barefooted and climbed up and around the steep dunes. It was still chilly by the water and the wind was blowing hard, but on the path our feet were embraced by the warm silky sand. We trudged along the path, exfoliating our feet until we reached the top.

Many ocean dune areas in the US are restricted and visitors must stay on the paths to protect the plant life, but not here. The vast area with few visitors meant that running around the dune trenches and jumping from the tops was permitted. We watched a few children doing just that and then we did did the same thing—running up the dunes then down again, enjoying ourselves immensely. After frolicking like kids, we relaxed in a warm spot where the dunes protected us from the wind.

Our next planned stop was Cape Perpetua. Many years ago, as I sailed down the Oregon coast, I learned that rounding each of the many capes was usually unpleasant as the waves refracted confusingly back to sea and the wind became stronger and capricious. But this time, I was going to climb one of the highest capes on foot and look out over the ocean, pitying the sailors from on high.

As we approached the cape, we crossed a bridge and saw more than a dozen cars had pulled off at an overlook so we pulled off to see what might have caught their attention.

A sign at the overlook told us we were at Thor’s Well—a blowhole along the rocky beach. Of course, we took the steep trail down to the rocky shore to explore. Even though the tide was pretty low, the blowhole did not disappoint.

Then it was time to hike the St. Perpetua trail, which is short, less than three miles total, but steadily climbs 800 feet to the top of the cape. We were somewhat confused about the location of the trailhead, so our hike was closer to four miles.

After an initial additional trek along a pretty stream, we located the main trail and trekked uphill through the thick undergrowth surrounded by giant cedars. Because we were in the lee of the cape, the wind was gentle though the fog couldn’t decide if it wanted to stay or go. 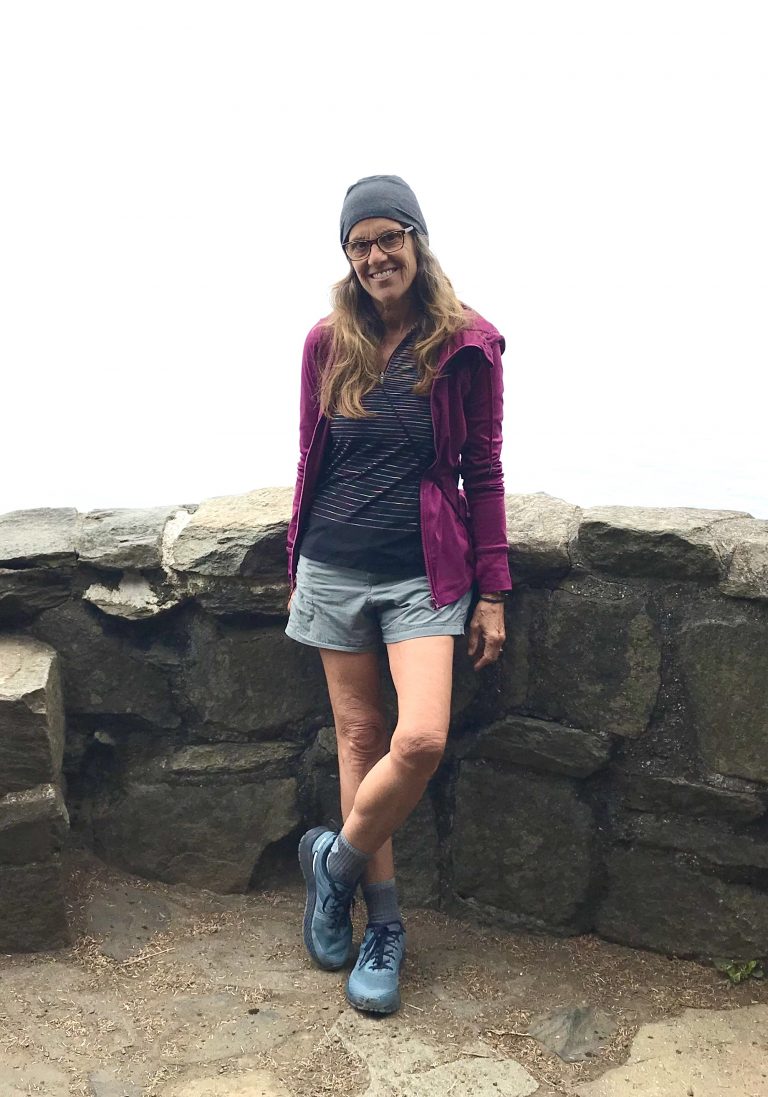 Finally at the top, the wind reappeared as we took in the sweeping views to the north and south, the beaches far below white with foam as the waves crashed and the sea was covered in whitecaps. Along a loop trail around the summit, we discovered a stone structure that looked somewhat like a medieval hut. A sign informed us that the CCC built the structure so tourists could enjoy the view with some protection from the constant wind, and later the military used it as a lookout post during WWII.

As we sat on a rough bench near the peak catching our breath, we saw a large woman with a stroller full of baby heading around the loop trail. We couldn’t believe our eyes at first and asked how she came all the way up the steep trail like that. She laughed and said that there was a parking lot a hundred yards away we didn’t see where visitors could drive up a steep road to the top. We decided that going up the hard way was more our style.

Back down the steep trail, we briefly rested in the truck and then headed north again to another National Forest campground near the ocean. Susan had somehow scored an impossible campsite reservation that faced the ocean. The showers were closed—and it was about time for them—but the view from the truck was of breaking surf past a wide beach. Because of our senior pass, we paid only $11 for it. The fog was low over the ocean and the wind was chill. It was summer though Susan was wearing three layers including a down puffy coat. Back home it was 107 degrees and I was glad for the chill.

We planned an early departure the next morning on a path that would take us from the cool gloom of the Oregon coast, eventually to the high peaks of Glacier National Park.