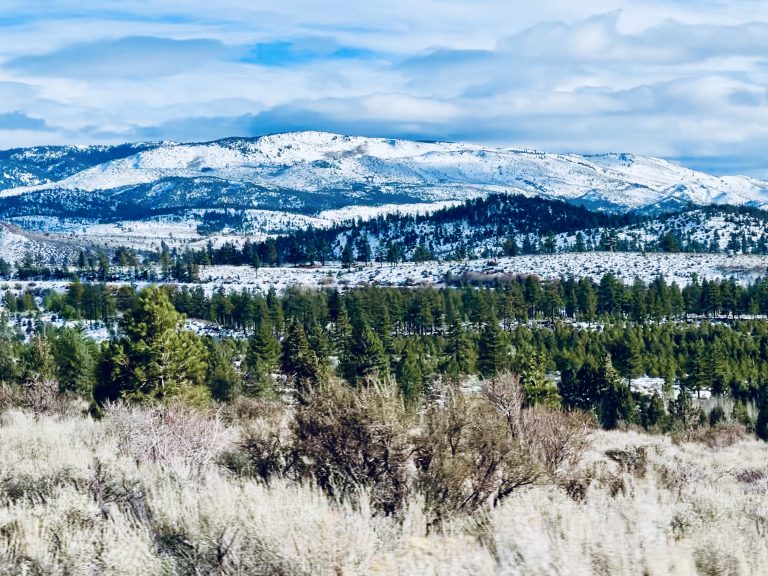 Sometimes an adventure just comes together. We had nothing on our calendars scheduled for a week so we came up with a hybrid camping/resort trip. Actually, the resort wasn’t our idea. Our friends were staying in a timeshare near where we wanted to camp and asked us if we’d like to join them for a couple of days. Let’s see, two days of snow and temperatures in the teens with some snowshoeing and camping, some desert canyon hiking and then a couple of days at a Palm Springs resort where the weather would be in the 70’s? When can we start?

Turns out it was just after a morning doctor appointment in town. After a quick gas fill up we were on our way. We decided to take a road we’d never been on to cross the Sierra Nevada range—Carson Pass. Though portions of the road are above 8,000 feet, it’s one of the few passes that’s typically plowed through the winter. The truck’s 4wd was fixed (we’d need it) and we’d packed it for a week. Choosing clothes was tough – long underwear, lots of layers and jackets, wool socks, heavy hiking boots and snow shoes, along with t-shirts, shorts, swimsuits and flip flops. California truly is diverse.

We climbed up from the Sacramento Valley through the Sierra foothills and into the El Dorado National Forest. Once we’d reached about 3,000 feet of elevation on Highway 88, patches of snow became visible. The wet weather back home had obviously arrived here as snow, lots of it.

Eventually, the piles of snow alongside the road rivaled the many feet of snow we experienced at Lake Tahoe in the winter two years ago.

As we approached the 8,500-foot Carson Pass summit, things really became interesting. A large red sign informed us that we were in an avalanche area. There were steep hills of snow on both sides of us and visibility was extremely limited due to lightly falling snow and dense clouds that merged with the snow as we rounded bends in the road. The avalanche area was so interesting that when we reached the end of it we  made a U-turn and went back through it a second time, tempting fate just a little.

After the avalanche area, we descended the eastern side of the Sierra range for a few miles until we found the Sno-Park area near an expansive meadow. This would be the perfect place to try our new snowshoes. Tip: try on brand new snowshoes at home where you can figure them out in the comfort of your living room, not in three feet of snow. Actually, don’t try on your snowshoes in your living room unless the floor is concrete—modern snowshoes have some pretty rugged spikes on them.

We finally got our snowshoes adjusted and trudged around the beautiful snow-covered meadow. The snow was several days old though and much of it had compressed so the snowshoes were not as effective as they’d have been in fresh powder. Anyway, it was fun and a good introduction for us.

Back in the truck, we eventually turned off of the Carson Pass highway and onto Highway 395, one of the prettiest roads anywhere. The road traverses a narrow passage through the beautiful Sierra range then heads south between that range to the west and the stark White Mountains to the east. We’ve driven 395 numerous times but never in the middle of winter when both mountain ranges were fully snow-covered and the lakes adjacent to the highway were iced over. In every direction we looked the views were mesmerizing.

By 4:30 it was getting dark and though we could easily have just kept driving and gazing at the wondrous scenery while the sun dropped behind the mountains, it was time to meet the challenge of finding a place to camp amid all the snow. Campgrounds were closed (winter closures, plus Covid) and though Highway 395 was plowed, finding plowed secondary roads to turn off on for the night was not going to be easy.

At one point before we left on the trip we considered checking out Travertine Hot Springs, located on a turn-off from Highway 395. Having our own hot tub, however, apparently has left us jaded and we’d decided trudging through the snow and partly frozen mud to soak in smelly springs wouldn’t be on the agenda. And although the hot springs are on BLM land where camping is permitted (other than right by the springs themselves), we assumed the road to the springs would be covered in snow and impassable. But as we drove past the turn-off for the springs, we noticed that the dirt road to the springs appeared to have been plowed–or at least the snow had been compressed enough by other vehicles to make the road passable.

We realized that it was unlikely we’d find other areas to camp any time soon–with all the snow, we couldn’t simply turn off the main road and find a spot to camp in the national forest like we do in summer. Besides, we were climbing in elevation, though we were already at 6,500 feet, and knew it would get even colder higher up.

So I turned the truck around and we went up the slushy dirt road leading to Travertine Hot Springs until we found a small unplowed side road that climbed up a steep hill. It looked like at the top of the hill there might be an open spot to camp so we headed up. At 100 yards in, a foot of snow covered the steep dirt road but there were old tracks through it so I was pretty sure there must be a campsite at the top. I blasted through until I couldn’t, then engaged 4wd (it had better work now or we’re really screwed, I thought) and we slithered up the hill, powering through the slushy snow. Then we were stopped by a deep patch of sandy/muddy gullies across the road. Susan thought we were as far as we could go because off to her side was a steep drop off into a gulch and we’d have to get right up to the edge of the slippery road to clear some of the gullies. But our exploration motto, which has served us (mostly) well is “just go a little farther.”

As I gunned the engine, Susan squealed, shut her eyes and held on to the passenger grab bar, but the truck bulled through. When she opened her eyes, we were perched high above the surrounding hills on a small level spot that faced the full majesty of the snow-covered Sierra Nevada range, across the valley from us.

It was stunning. And easily worth the scary climb up. I noted (only to myself) though that in the morning the forecasted 17-degree temperature would refreeze the muddy snow and the trip down the steep hill trying to control our speed on ice might be much more of a challenge. But I’d worry about that tomorrow. For now, we took in the incredible views.

As usual, an evening stroll was in order. Regardless of the cold and the slush, we decided to explore our hillside and hike back down the snowy road to find the springs.

We went as far as the sign leading to the springs but decided not to continue the final half-mile or so. A steady stream of vehicles passed by in the slushy mud (including, yet again, a Prius, which I’ve had to rescue before in places they shouldn’t be) going both to and from the springs, reaffirming the wisdom of our decision. There is little inviting about crowded hot springs, known for nude bathers, in the snow, during Covid.

The view from our “kitchen.”

There were snow patches and some slushy mud puddles, but for the most part the sun had melted the snow on the mound near our truck. Rather than set up our table and chairs in the frigid temperatures, we set up our stove on the frozen ground, warmed up left-over salmon chowder, climbed back into our seats in the relative warmth of the truck, and enjoyed dinner with a view of the sun setting over the mountains.

PrevPreviousPost #73: To Half Dome and beyond
NextPost #75: The Sierra’s forgotten stepsisterNext