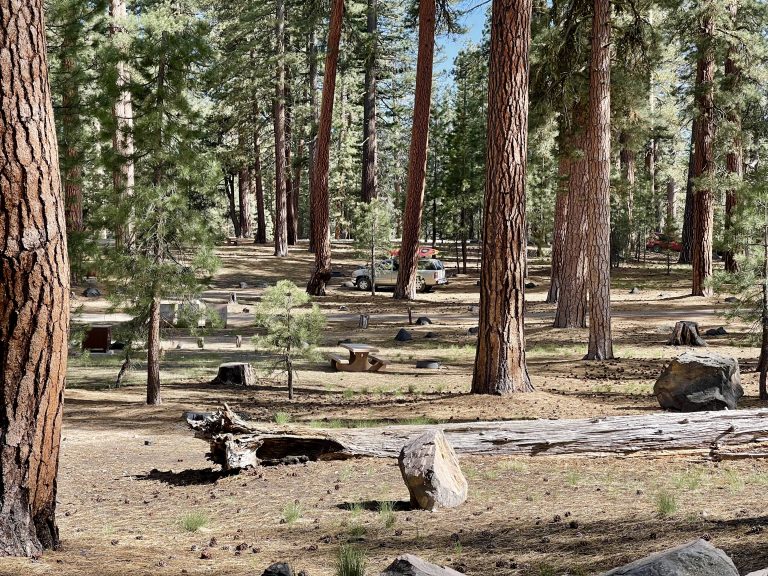 California is in one of its worst droughts ever mostly because last winter received far less precipitation than normal. Fire season has already started and there have been a few small wildfires nearby already. The reservoir across the street from our home looks like a low-flowing river instead of a grand lake. When we travel anywhere in the west now, we have to be aware of the drought. The lakes and rivers are low (or empty!), forest conditions are exceptionally dry and 2021 may be another record year for wildfires.

It’s also been hot at home, and hot early. In late May, we had a heatwave with 100-degree plus temperatures, breaking records. And now in mid-June the heat returned. At home, we were forecast to have about five days with temperatures over 100 degrees and one day as high as 110. We’ve always said that when the heat becomes unbearable, we have two choices: head for the cool coast or higher elevation.

We chose the mountains to escape the heat this time and left mid-morning for Lassen Volcanic National Park, just a few hours’ drive from home. Most people use one of the two main entrances to access the park, but we chose a more remote road that takes an extra hour and a few miles of dirt road.

Our destination was Butte Lake, which has a semi-primitive national park campground nearby. At 6,100 feet, it would be 15 degrees or more cooler than home, with highs only in the low 90s (still unusually high) and lows in the 50s—a perfect escape from the heat.

We arrived at Butte Lake Campground to find a dozen or so empty campsites and snagged a good spot. Though most national park campgrounds are fully booked long in advance, this one is remote and accessed by a 6-mile dirt road, making it possible to get a first-come first-served site, especially midweek.

Our campsite, indeed the entire campground, was shaded by massive ponderosa pines. If you’ve never sniffed a tree, you need to find a mature ponderosa in warm weather and stick your nose deep into the wrinkled bark and inhale. You’ll be amazed to smell vanilla. The whole campground smelled like pine needles and vanilla.

After setting up camp, we walked to the lake, which had emerald green water partially surrounded by a black lava flow. It was oddly stunning though probably more so in wet years. This year it was four feet below normal, exposing previously submerged volcanic islands. Before we left home on this trip, we’d tossed the kayaks on the truck and we planned to paddle the cool waters while we were here. There was enough water for kayaking (it doesn’t take much), but we quickly realized we’d have to carry the kayaks across a large swath of alternately dry land and muddy lakebed to launch.

Today, we decided to hike a trail that brought us along the lakeshore until it turned and climbed to a lookout over the lake. The soil was mostly soft sand-like volcanic cinder along the trail, something we’d get intimately familiar with soon.

From the lookout, the trail descended to a (now dry) creek in the forest that led to Butte Lake. Quaking aspen lined one section of the creek.

The trail then circled around near two beautiful small alpine lakes before returning to the trailhead. Our hike was just long enough to give us a decent workout and help prepare us for tomorrow when we planned to tackle the Cinder Cone—a roughly symmetrical 700-feet high hill built up when the volcanic systems under the park exploded, sending ash and cinders for miles, and leaving the giant cone. To reach the  summit we’d be climbing on soft footing along a strenuous spiral trail on a mountain made of gray cinders. It would be similar to climbing a massive sand dune. We planned to go in the morning before the sun heated the entire charcoal-colored mountain.