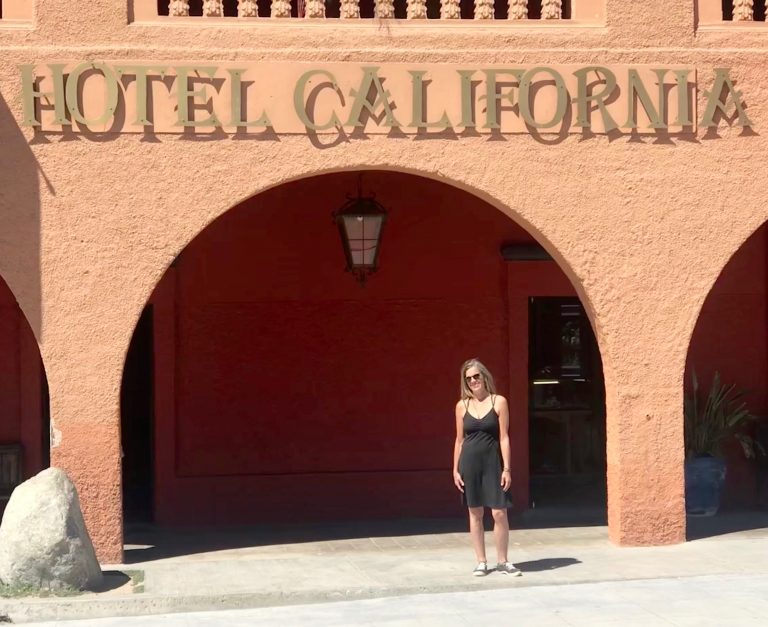 The decision to stay another day in Cabo was nixed a few seconds after it was uttered, and unanimously. The crowds, traffic, bad air and cost was too much. Ironically, the next place we visited sucked up nearly all the pesos we had left. Leaving Cabo was pretty easy. We found gas and, now that we’d reached the southernmost point of the Baja peninsula, we pointed the bow northwest. Our goal was Todos Santos, reputed to be a groovy artsy town full of hipster vegan types.

It was (except for the hipsters). In fact, Todos Santos was our favorite town so far. Most of the dilapidation of Baja Mexico was replaced with a well-laid town plan including walkable streets. We unexpectedly discovered that Todos Santos is (allegedly) the home of the Hotel California of Eagles fame. We certainly had come down a desert highway with cool wind in our hair. 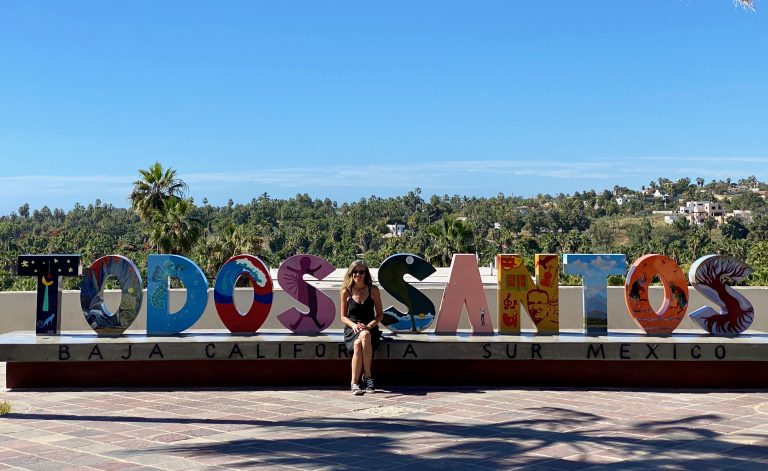 We put some miles on our shoes, going in and out of countless small stores selling not trinkets, but handmade jewelry and local art. Susan found a beautiful necklace of tiny rose blooms for herself and a lovely black coral necklace for our future daughter in law. I found myself a cool woven bracelet made from goat leather and chatted with the artisan in Spanglish. We failed finding anything artsy for the house (most things were too big to safely store in the truck until home and too expensive to ship), which was just as well as our supply of pesos had now become dangerously low. Credit cards were accepted but with a 20 percent premium (something about having to report it and pay tax). I dined on fish tacos from a street cart while Susan browsed and then we shared some coffee ice cream. The two tacos I had cost less than the tiny scoop of ice cream. Stupid gringos. 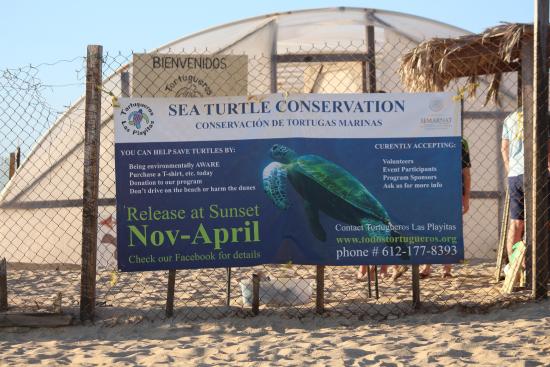 We’d heard about a beach where baby turtles were launched just outside of town so we headed there. Camping was allowed at the beach but it was just another exposed sunny, sandy area separated from the Pacific Ocean by low dunes.

The turtle volunteers said they’d be releasing some babies in a few hours so we decided to find a lavanderia to wash 10 days of dirty clothes. When the harried woman working there told us it would be one or two days, and the only campsite was exposed and hot, we realized it was time to move on.

Having circled the horn of Baja Mexico and started north, the LaPaz area was again our next goal, but not the city this time. We’d been told of a beautiful place to camp on a peninsula northeast of the town by Michael from Aqua Caliente. En route, we passed industrial areas that included smoke-belching smokestacks and the shipping and ferry terminal that connected Baja with mainland Mexico. Not exactly the beauty we were looking for.

But soon we reached the famous Balandra Beach. Dozens of cars, mostly locals, and various vendors selling unhealthy snacks were parked in the lot above the bay. We briefly stopped and saw what all the fuss was about. It was a large, curved bay with shallow crystal clear blue water, a handful of palapas, and a huge tidal area allowing swimmers to go nearly across the entire bay no more than waist deep. It was getting toward evening so we decided we could see this more another time and instead would continue a little further down the road to find a place to camp.

When we arrived ten minutes later at Playa Tecalote we could see why Michael liked it. A curving line of white sand beach with a couple dozen cars and RVs (and a couple of real overlander-type vehicles) stretched for a mile, with and a couple of small restaurants. But we kept on driving down the beach past the RVs (and the silly overlander vehicles, looking like industrial campers that didn’t go half the places we did) until we found a sandy road suitable only for 4wd trucks like ours. I made a note to myself to get a bumper sticker that says Four Wheel Drive Keeps Out the Riff-Raff. A few hundred yards in, at an area known as Playa Pilitas, we parked at a lovely spot overlooking the beach. We walked a little farther and found an even better spot on a larger bluff and decided to move. Good thing, because when I went back to the truck, some locals looking for a dinner spot parked so close to us they could barely open their door, despite there being room for five cars. I mumbled to myself that they possessed a serious lack of personal space, and I hoped no one would visit our new site.

After dinner (rice and chicken “casserole”), we walked down the beach and met Nate and Teri who were on an overland trek with their two young kids in a pickup-mounted popup camper pulling a trailer. We swapped stories and they told us about a new place to camp (Aqua Verde) while Nate and I talked about their plans to cruise on a 25-foot Catalina sailboat someday. 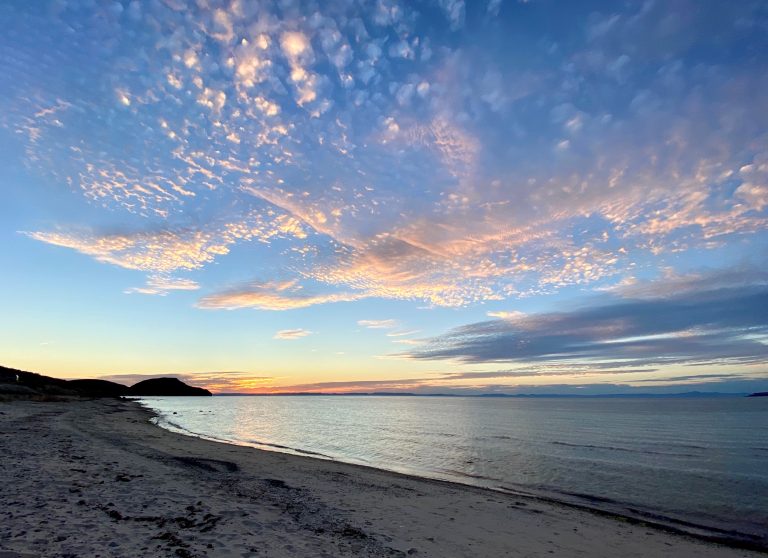 We ended our walk finding an even better spot to camp the next day. Apparently, I thought, we’re staying another day here. The sunset views were incredible. 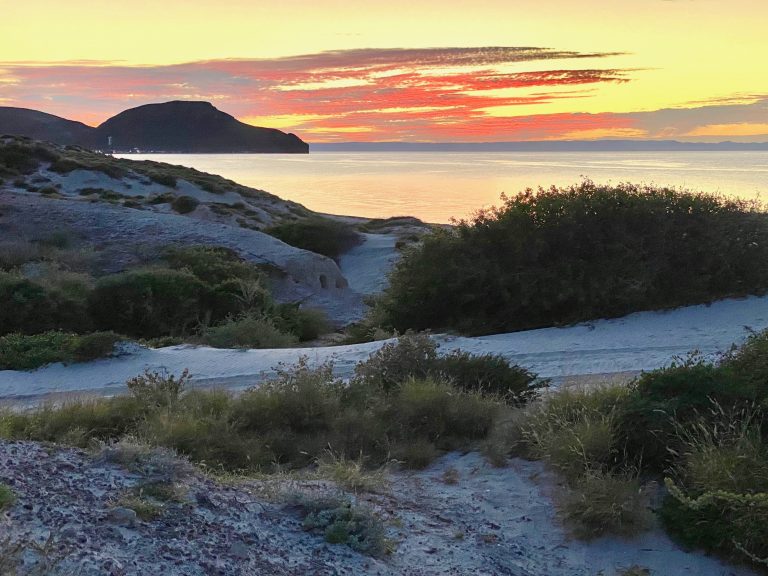 The air that night was delightful and the sound of the surf was ever-present, so we slept with the windows open. The bluff we were on was above two small bays, each with its own wave pattern. We fell asleep to the blissful sound of  lapping waves in stereo.