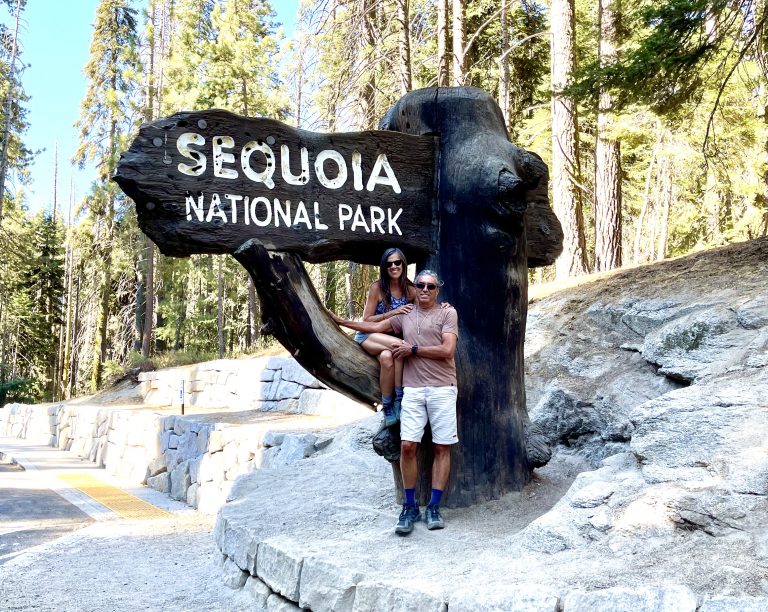 We agreed that this boondocking campground in Kings Canyon was one of our all-time top five. The stunning views of 11-14,000 foot peaks in the distance along with plenty of room and complete peaceful silence made it one we’ll remember. We lingered after breakfast not wanting to leave but we had a great hike to get to. It was cool at 7,000 feet but even up here we knew it was going to be a hot day in California. Though we hadn’t had internet for a couple of days now the last forecasts we’d seen had been for triple digits across much of the state.

We drove along the narrow but paved forest service road and turned onto the General’s Highway that quickly brought us into Sequoia National Park. We stopped at an overlook where we were surprised to find dozens of cairns. Normally, we’re not happy to see cairns used for any purpose other than as trail markers since they disturb the natural scenery. But this collection looked more like an art installation and was beautiful in its own way.

After about a half hour of driving we arrived at Lodgepole Campground where we parked for the Tokopah Valley Trail. A crystal-clear creek followed the trail as it wound up several miles to a waterfall. We had low expectations for the waterfall due to the drought but the mostly shady trail followed a rushing creek. Enormous two- and three- thousand-foot-high granite walls framed the valley.

The trail ascended 600 feet in elevation through pine, fir, cedar and small sequoia forests, past a field of wildflowers in bloom, and eventually up and around giant boulders. Because we were close to the campground and the trail was not a particularly difficult one, the trail was a bit more crowded than some. All of the hikers we chatted with were from either the Los Angeles or San Francisco area—each was about four hours away. We figured the out-of-staters were probably among the crowds at Yosemite instead.

Eventually, the trail ended as the towering granite walls curved into each other to form the end of the canyon. Up high, a trickle of water fell over a thousand feet. One hiker we talked to said two years ago the fall was gushing, one entire rock wall wept water and the creek was a torrent. We hoped the drought would end soon.

We sat on a smooth boulder under a larger boulder in the only shade at this section of the trail. It wasn’t nearly as hot as yesterday but the sun was intense at the high elevation. After a short while, we gave up our shady spot to other hikers and headed back down the trail. Shortly before reaching the parking lot we found a place where the creek was all smooth granite and boulders and we relaxed in the cool water and mottled shade for an hour or so.

Finally, back at the truck, we continued south on General’s Highway toward the park’s exit. Enormous sequoias lined the road on either side, giving way from time to time to stunning mountain vistas. This part of the park is the most crowded (though still far less so than Yosemite), as it leads to the most popular sights, including the General Sherman tree—the world’s largest tree at 275 feet tall and 36 feet in diameter. We were glad we’d visited this section of the park last December when snow blanketed the forests and there were only a handful of visitors brave enough to traverse the icy roads. As beautiful as the park is in summer, we agreed that snow-covered sequoias were even more spectacular and we were so glad to have had that intimate scenery nearly to ourselves.

Rarely have I driven a more twisted road than the one through the park. And I’ve driven many twisted ones! The General’s Highway had to lose 6,000 feet of elevation along a tortured canyon and did so with numerous 10-mph hairpin turns and many more only slightly faster as we went down the 8% grade.

When we left the parking lot at the trail, it was 84 degrees and as we wound down the mountain the temperature rose. After a full upper body workout, sawing back and forth on the steering wheel through hundreds of turns, we came to the park’s exit where it was 100 degrees.

Oddly, we left the park, only to have to enter it elsewhere twenty miles away for our next adventure. We turned left onto Mineral King Road, a small steep well-paved road that said our destination – Cold Springs Campground – was 34 miles away. Why, we wondered did the map say it was going to take two hours just to go 34 miles? We found out soon.

The well-paved section ended quickly. In fact, calling the road paved was an insult to dirt roads. Rough, narrow and chopped up, it began immediately to climb steeply through sagebrush and a few stunted trees, nothing like the park of giant sequoias we’d just left.

Then, it got steeper and worse while the temperature rose to 104 degrees (!) even as we climbed. The road had every bit as many sharp turns as the General’s Highway but was barely one-and-a-half lanes wide, less in many places, which was entertaining as we dodged a few vehicles coming down (Note: propane trucks will not back up).

Halfway up, the truck’s AC was blasting and I watched the engine temperature gauge rise past where I’d ever seen it before. We were climbing a 10% or more grade in low gear, barely making 20 mph as we twisted around blind narrow corners hoping another vehicle wasn’t in our lane. The truck’s temperature climbed more until I realized I had the rear AC on as well; turning that off brought the temperature back to where it usually was. Once again, I was impressed with the GM engineers who designed these trucks. They really were made for extreme conditions and I’m pretty sure I could have also been pulling a large trailer and still made it up the mountain in 100 degree weather, comfortable inside—except the road was nowhere near big enough for one.

We dodged a few more cars coming down the hill and still we climbed and turned around on the tortured road whose only advantage over a rough dirt road was that there was no dust. Eventually the road entered the national park again and we were hopeful the road quality would improve—it did not. Suddenly, at about 6,000 feet, trees came into view along with their welcome shade. The temperature had finally begun to fall below 90 degrees though the road had become even worse as at times it was suddenly unpaved. A few more grueling uphill miles brought us through towering sequoia groves and then to a campground where we’d made a reservation.

Our site was amazing, right along a noisy rushing creek under towering pines. We explored the campground and splashed in our slice of creek as the temperature finally cooled.

Our neighbors came by and mentioned that they snagged the last campsite after they called from the campground payphone (?!) to the national forest reservation system. A sign at the beginning of Torture Road 34 miles back said that the campground was reservation only with no walk-ins. Ballsy move on their part, we thought. Getting to the campground only to be turned away to drive back down the road, and by now in the dark would be agony.

After dinner, we sat in our comfy chairs, feet on a fallen log, and watched and listened to the creek as we contemplated tomorrow’s much more strenuous hike.

We’d brought along some Susan-made cookies and over-stuffed ourselves after dinner. I coined the phrase A Half Cookie Too Much, which became something I’d call Susan when some of her wild ideas got out of hand.

Stomachs (too) full, we went to bed just past sunset, knowing we’d need to get an early start for tomorrow’s long hike.