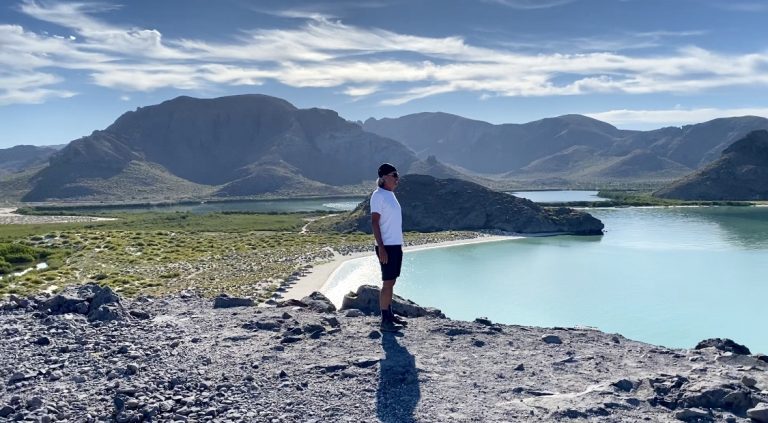 We woke at 5:45 am (first light) to absurdly loud, throbbing Mexican music. After being gone all night, the fishermen I’d helped were back ashore with part of their catch. After I opened and closed the truck door once, they must have heard and realized we were still here and shut the music off and took off again in their loud leaky boat for more fishing.

Despite the early wake up, I don’t know if I’ve ever passed a night with a more pleasant and soothing sound. The waves lapped against the shores of the two coves below our bluff in perfect stereo. There was no other sound (except, apparently, me briefly snoring until I was asked to roll over). When I hear larger waves crash, I’m alerted and often have a hard time sleeping. Too many nights sailing, listening for the rogue wave or too-close surf. But this was magical, at least equal to a small creek chuckling in the background, our relaxation yardstick.

The early waking allowed us to linger and listen to the morning before breakfast. After getting our fill of nothing, it was breakfast time and I’d wanted to try out some freeze-dried hash browns I’d bought online. They were as good as I’d hoped. Unfortunately, we discovered that we’d accidentally brought only two propane canisters (I thought we’d packed three). This morning we’d gone through the last of the first one. Including a couple of dinners out and a hotel night or two, we’d gone through the canister in nine days. There seemed to be a good chance we’d run out before leaving.

We broke camp and left about 8:30 am to start heading toward what was supposed to be the most beautiful place yet, as related to us by Nate and Terry, Agua Verde. But there would be stops along the way.

The first stop was a return to nearby crescent-shaped Balandra Beach—this time we’d hike up to the top of the cliff. Even though it was still very early in the day, there were at least a dozen others already there. Balandra Beach is one of Baja Mexico’s most famous. The views from the top of the cliff revealed that in addition to the cove we had seen two days before there was an equally beautiful and far less accessible cove slightly to the north.

At the far end there was a mushroom rock formation (Hongo de Balandra) that was somewhat reminiscent of the famous arch at Cabo. Before we left, we took some photos for some young local tourists, visiting, they said, from La Paz. 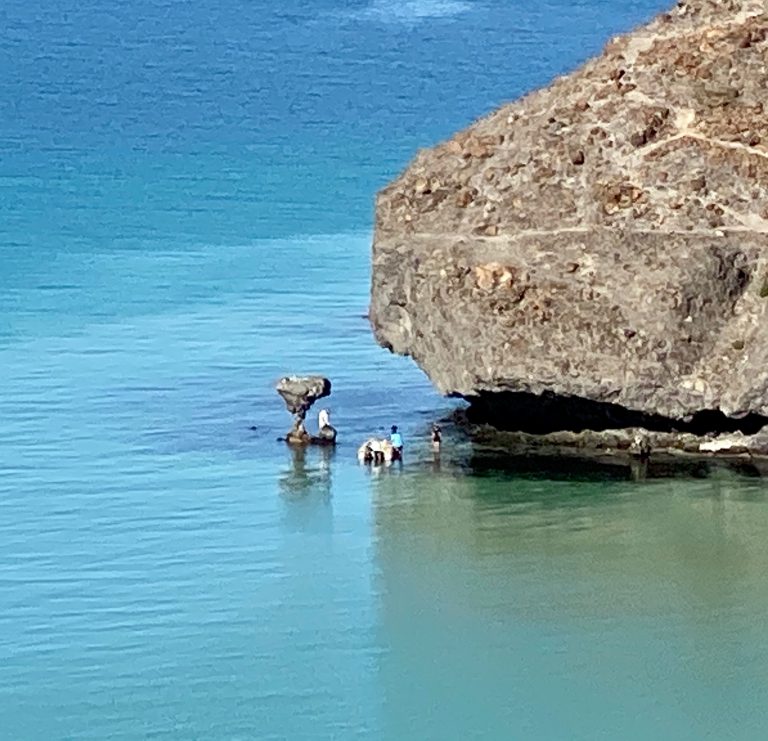 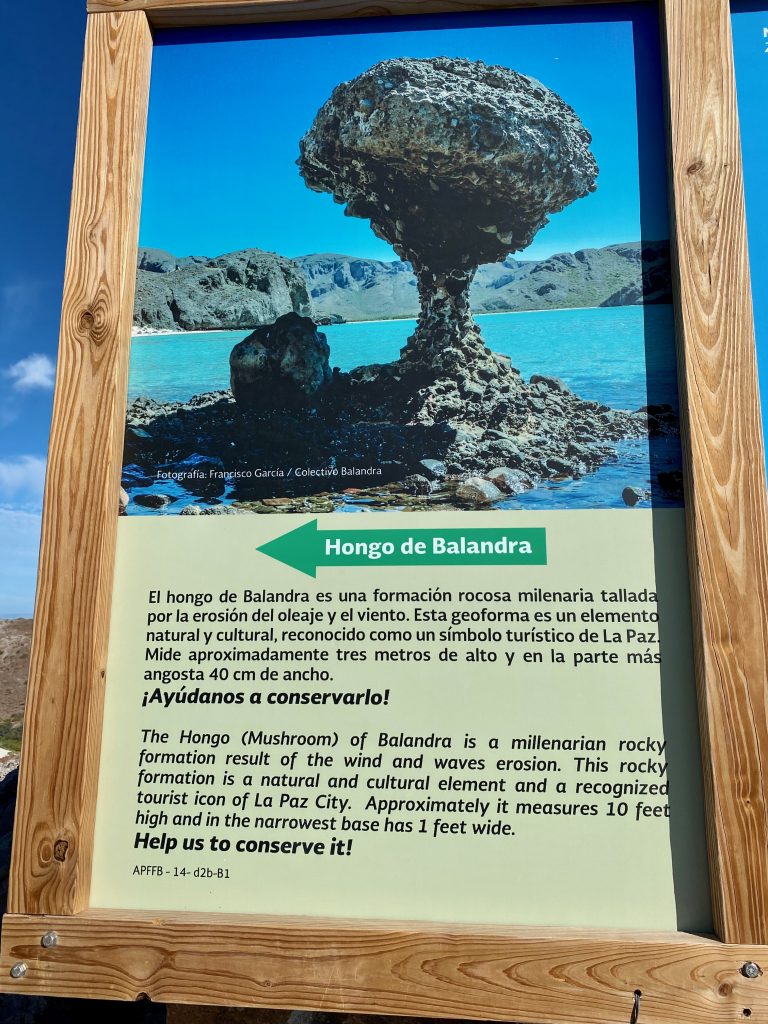 Before continuing our journey, we needed to stop in La Paz, a few hours away, for more water, food, gas, and most importantly, clean clothes. It was two weeks since we’d left home and our clean clothes were long since dirtied – we were dangerously close to mutual mutiny. On the outskirts of town, we found a lavanderia run by a woman who said we could come back at one o’clock (three hours hence) and she’d have them washed, dried and folded.

Meanwhile, we set off to find purified water. The red-faced kid running the equipment had a hard time filling up our collapsible jug and his boss laughed as he struggled. $US1.30 later and eight gallons heavier, we left for groceries. The giant store we found had most of what we wanted and after going up and down each aisle (to see what the locals shopped for as much to find what we wanted), we left with US$13 worth of food. Next door was a small Sears department store (which I thought had gone out of business) so Susan shopped for shorts (she didn’t find any) while I sprinted three blocks to a fereterria (hardware store) I was told might have the one-pound propane canisters we needed. Sweating in the mid-day sun, I walked through the dusty paved roads to the store, only to be told they didn’t have any. Other travelers had commented on how hard it was to find the canisters so I figured we were out of luck. While we waited the final hour until the laundry would be done, I found a food truck and had a large, delicious and ridiculously cheap meal of burritos and tacos. Meanwhile, Susan took advantage of rare LTE service to catch up with the kids.

Chores accomplished, we headed out of town, this time north, retracing our steps on the only highway in Baja. The long road on the high plateau would have been boring had it not still seemed so foreign. Mexican highway engineers are different from Americans. Rather than bull and blast their way through any obstacle, no matter the difficulty or cost, Mexicans allow their roads to flow with the terrain. Hill? Go up. Dry wash? Go down. Mountain? Go around it. If you have to slow from 110 kph to 40 for a curve, get used to it. It’s a gentler kind of road building.

We were told that the final stretch of road to Aqua Verde was a treacherous and beautiful one that should not be undertaken when it was dark – and not without a very sturdy vehicle, preferably with 4wd. Using the iOverlander app, we knew there would be somewhere to camp before that just for the night. The turn off to the camping spot was said to be marked by a burro tied to a cactus.  The burro was absent, but we found the tiny road after first driving by it on a road that had gone from US National Park Service quality to old Mexican highway quality, and that soon would become dirt. We stepped out of the SUV, avoided stepping on cow pies, and took in our surroundings from the middle of the empty road. We would not need to worry that our campsite was only about 30 feet off the road. There were no cars to be seen in either direction.

We made camp among the cacti and free-ranging cows in a place so quiet it almost hurt to listen. I hoped for coyote howls in the night. Surely this was one of the most remote places we’d camped.

Epilogue: Wish granted. I was awakened around 1:00 am by coyotes howling and yipping. I slipped back into a pleasant sleep only to be awakened by them again a couple of hours later. Magical.

We ended up calling this place the Four C’s. Cacti, cows, camping and coyotes. 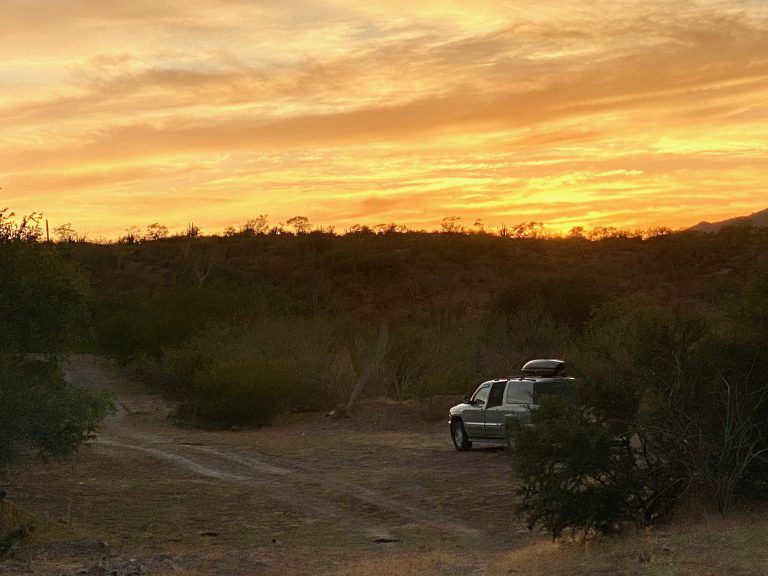