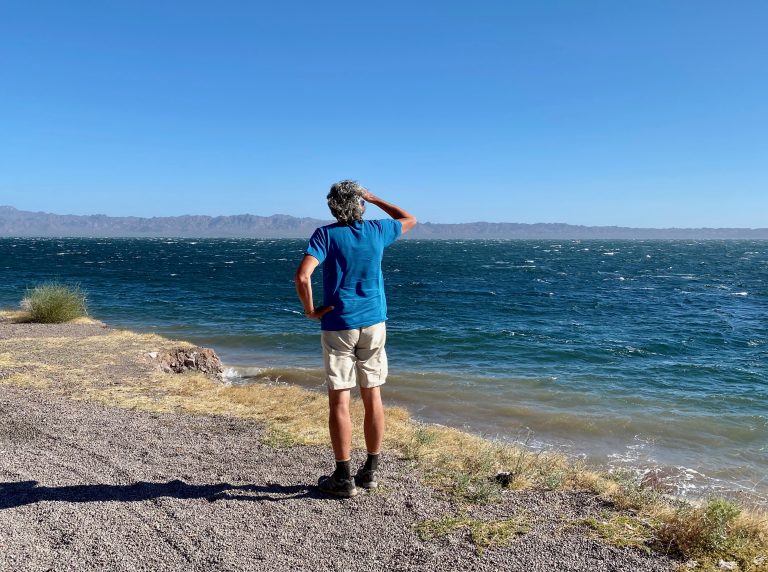 All through the night, the wind howled. The palm fronds hung on bravely and the sand dust swirled throughout the campground and into our truck. At times it seemed like the trees had to break apart and fall on top of us. Some of the gusts were surely 40 mph or better. It made sleeping for me difficult and I ended up getting up to shower shortly after sunrise (which also allowed me to have my first hot(ish) shower in a week since I was the first one in).

We walked one last time up the wide tree-lined walkway to Café Olé for a quick breakfast and to suck up as much internet as we could before leaving. The internet at Romanita Campground was rarely strong and usually very slow so we took advantage of the strong signal at the café by checking email and weather, and otherwise enjoying a bit of time online.

The forecast for Loreto here on the Sea of Cortez was for very strong winds again but further north and west, at Laguna de San Ignacio on the Pacific coast, the winds were supposed to calm. Susan had read that Laguna de San Ignacio was THE place to see gray whales – perhaps the best place in the world according to National Geographic. It was about five hours away, so we headed out.

The drive took us again through high desert and wound around mountains. Cacti were less numerous, the rocks seemed burned and it felt so dry that the whole place might burst into flame at any time. The road was good but narrow. We followed a slow pickup towing a medium sized cargo trailer and I noted that if he was in the very center of his lane, the single yellow line to the left and the single white line to the right were each about six inches from his tires. Not much room for error. And, the shoulder extended from 0-12 inches from the white line. Any farther over the line than that would be an expensive repair – or worse. I passed him with inches to spare.

Just before the road turned westward and away from what would be our last views of the Sea of Cortez, we drove through the industrial town of Santa Rosalia, which had once been a copper mining town developed by the French in the late 1800’s. The Iglesia de Santa Barbara – a prefabricated metal church in the town – was said to be designed by Gustav Eiffel. The factories, old locomotives and lots of rusty mining equipment in the tough-looking town were long since abandoned but never removed. Mexicans seem unfazed by the safety hazards of unstable deteriorating structures.

After several hours, we stopped at the tiny village of San Ignacio, which had little more than an old mission, the usual couple of restaurants, a few shops, and a pretty town square. 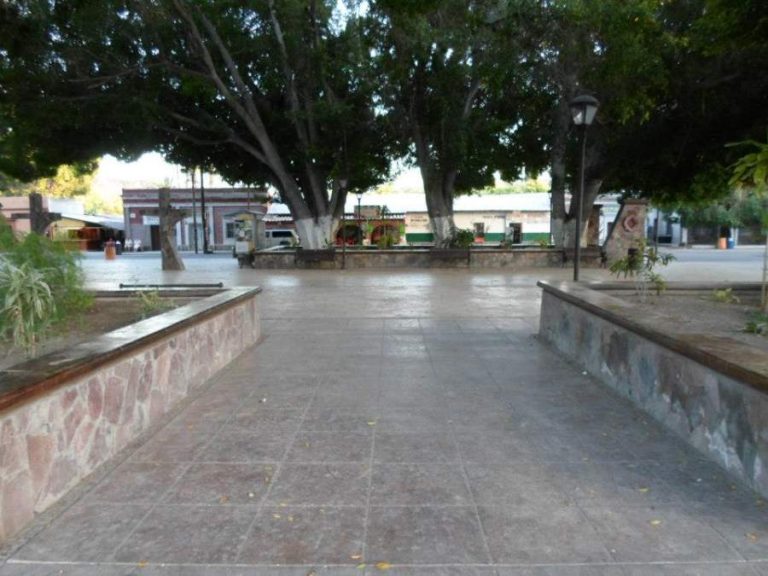 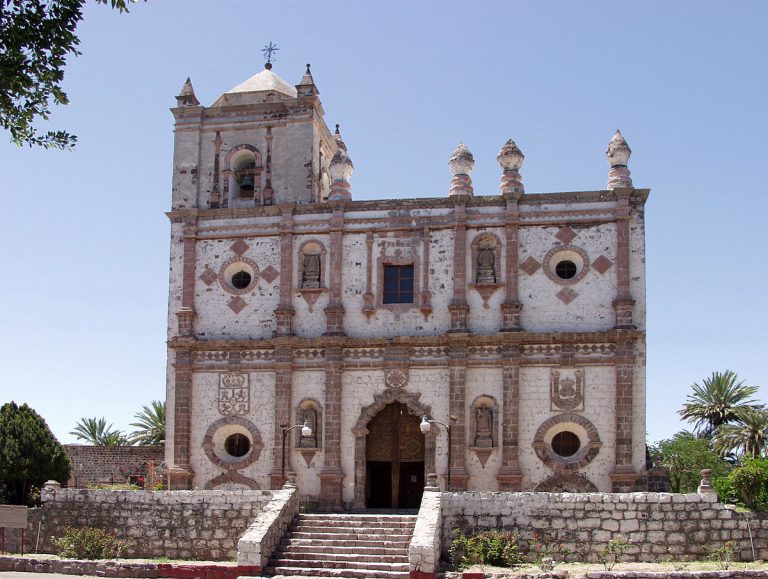 Susan had read that there were two whale watching companies providing camping and tours at Laguna San Ignacio, and one had a small office in San Ignacio. We easily located the office in the tiny town and went inside to inquire about the tours. We were ignored and treated rudely by the woman there (the first time on our trip) and quickly agreed we’d use the other whale watching company instead. When the woman finally spoke to us, she told us that the wind was too strong for whale watching today and likely would be too strong tomorrow as well. The forecast we’d read earlier in the day apparently was wrong.

It turned out that the town of San Ignacio was still quite a ways from Laguna San Ignacio. Heading to the whale watching area would require a two-hour slog (why is it always two hours?) down a washboard road. If we did that, we might get all the way there and find uncooperative wind for another day (or two).

We returned to the truck, parked alongside the town square, made sandwiches, and discussed our options. One choice was to stay at an (overpriced) campground nearby just outside of San Ignacio and wait out the wind, but there was little to do there so that idea was quickly nixed. We could instead head further north and go back to Ojos Negros (the whale watching spot where we’d camped at the beginning of our Baja trip) but it was quite a bit further north, there was no reason to think the weather would be better there, we’d already been there, and the whale-watching was not as well-known there as it was at Laguna San Ignacio. So we decided against that idea too.

Ultimately, we concluded that our intention was to see the whales at Laguna San Ignacio, so we decided to make the difficult drive there and take our chances on whether the wind would ease enough for boats to go out anytime soon.

Before leaving the village, we stopped to buy an incredible date tart from a large Mexican woman at a tiny shop (our choices were dates, date tart, and date bread).

What we found once we arrived at Laguna de San Ignacio after the long and difficult drive was the wind we’d hoped we’d left behind, blowing even harder, making even walking a bit of a challenge. We had to drive through a small village of dusty sandy roads and shack-like homes that were confusing without street signs, or really even streets, but we eventually found our way to the camping area. There were only two places to camp, one owned by the company with the rude woman at the in-town office. We opted for the other, Antonio’s Eco Tours, even though there were no palapas or cabanas available there to protect us from the wind (a large tour group had been there waiting out the wind for several days). The manager said we could park in the lee of a small building and even use the small kitchen and dining area inside as a refuge and place to cook. The campground also had composting toilets and solar showers and even though it was expensive at $US20 a night, we decided to ride out the wind and hope for a boat ride the next day. 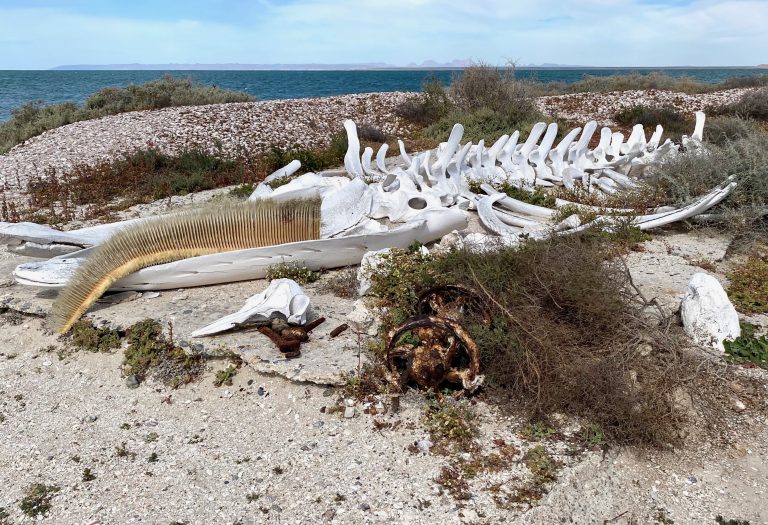 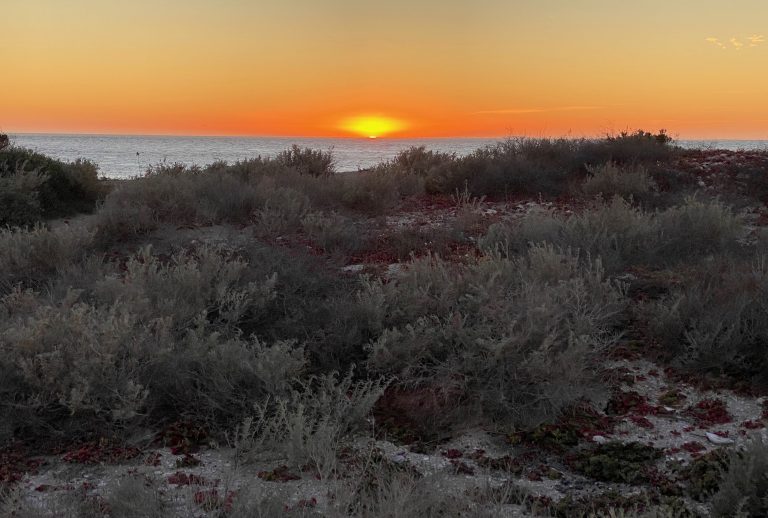 In the late afternoon, we bundled up and took a short walk along the beach where we came upon the remains of a whale. After dinner in the small kitchen, we braved the wind again to watch the sunset over the ocean.