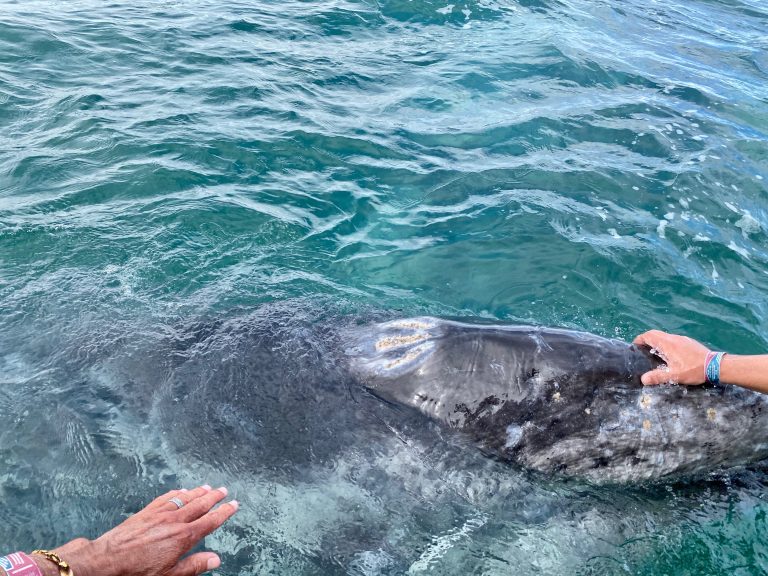 The wind blew through the night and shook the truck at times but eventually diminished a little. Getting out of the SUV was literally difficult as the chilly wind blew the doors shut when we opened them. But we were up early because the manager had told us previously that there might be whale watching at 8 am.

We went into the kitchen to make breakfast and figure out alternative plans if the wind didn’t die down. Before we’d cleaned up from breakfast, the manager stopped by and told us there would probably be no tours that day but to check back at nine.

We decided if this didn’t work out we’d drive to the other place for whale watching – Ojos Negros. Perhaps the wind pattern would be different there. We disliked the idea of driving an hour back on that terrible washboard road only to have to then drive down a similar washboard road if it were too windy here.

We were happily surprised when the manager returned shortly after and said that some fishermen had taken a reconnaissance trip out, the wind was subsiding, and there would be a tour at eleven. Finally, we could get what we’d come for, though the bay was still pretty choppy and I wasn’t convinced we’d be able to go or that the whales would be willing to surface.

But at 11, we loaded up five people in a 27-foot panga and zipped downwind for a half hour to where the whales were supposed to be. Susan chatted up the others in the boat (a couple our age and their adult son) and learned they were from Philadelphia. When she responded that she grew up outside of Philadelphia they randomly asked her if she knew a good friend of theirs—in fact, the person who’d told them about whale watching here—named Ernie Karpulus. It was one of those moments—Susan has known him since elementary school!

We finally sighted some spouts and our guide (who never spoke but skillfully led us to the best spots) slowly took us near where we saw a whale a hundred feet away. She dove and we soon found others but they all seemed to prefer leaving us. Still, the sight of the majestic gray whales was awesome. We motored near some others and got close enough to see their eyes. After an hour we turned and headed slowly north, back toward the campground, when we found ourselves nearly surrounded by whales. Several people in the boat let out audible squeals.

A half dozen whales were within 100 yards and some seemed to be performing for us, rolling over or leaping out of the water. 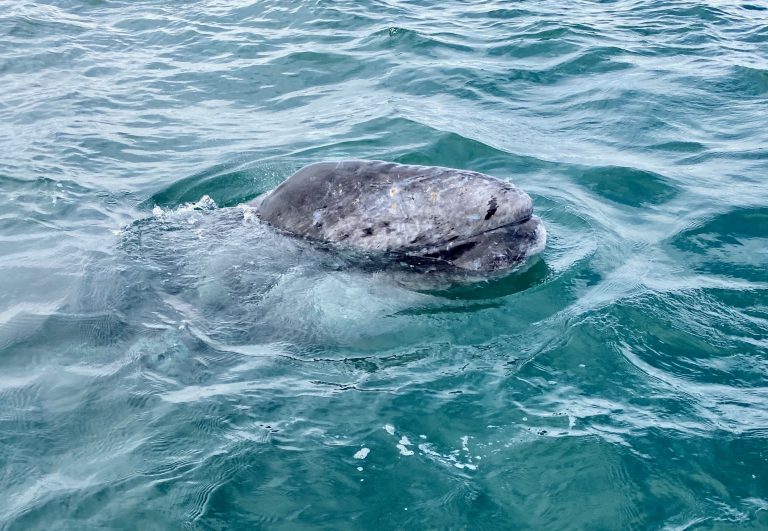 One swam close, lifted his huge head out of the water and appeared to “smile” at us. We were all spellbound, realizing it was us who were also being watched.

Whales spouted everywhere and we could see calves bigger than an SUV swimming next to their semi trailer-sized mothers. We also spotted a couple of dolphins gracefully making their way through the ocean as well as various seabirds soaring above.

Nearby, a calf had approached another panga and the people were bent over the side, trying to see and touch it. Suddenly, the baby approached our boat and we could see underwater how he turned his head to see us, obviously curious. He swam closer until he was almost touching the boat, rolled onto his side to look at us and brought his mouth out of the water for us to touch him. It’s a feeling I’ll never forget. His skin was soft and doughy and as I reached out to touch him again, he exhaled onto me and I could see the barnacles in his blowhole. Again, he came to Susan and me, allowing us to stroke him, while his mother watched from a dozen feet away. Everyone in the boat was chattering madly about the baby gray whale who allowed us – even wanted us – to touch him. I wondered if the whales could sense our childlike excitement.

After a little while, the captain pointed to his watch that it was past time to go (tours are strictly controlled and limited to 90 minutes) and we slowly left the calf behind. During the trip back, several whales spouted next to us, which an hour ago would have us pointing wildly, cameras at the ready, but after our intimate encounter with the calf, no one said anything, absorbed in the wonder of seeing such amazing creatures up close and being able to touch them.

We broke camp when we got back and then spent the rest of the day traveling from Laguna San Ignacio north. As we traveled along the mostly long narrow road, we could feel the end of our trip approaching. About an hour past Guerrero Negro, we turned off the highway onto a sandy road and followed it, looking for a remote place for the night. We knew we’d really miss the ability to simply camp wherever we could find a beautiful spot.

Eventually, we turned off the highway onto an unpaved road with deep sandy gullies that I wasn’t sure the truck could handle, but somehow it did. After a couple of miles, we found ourselves on a large sandy bluff with a distant view of the Pacific Ocean. We made dinner and then tucked ourselves in for the night. 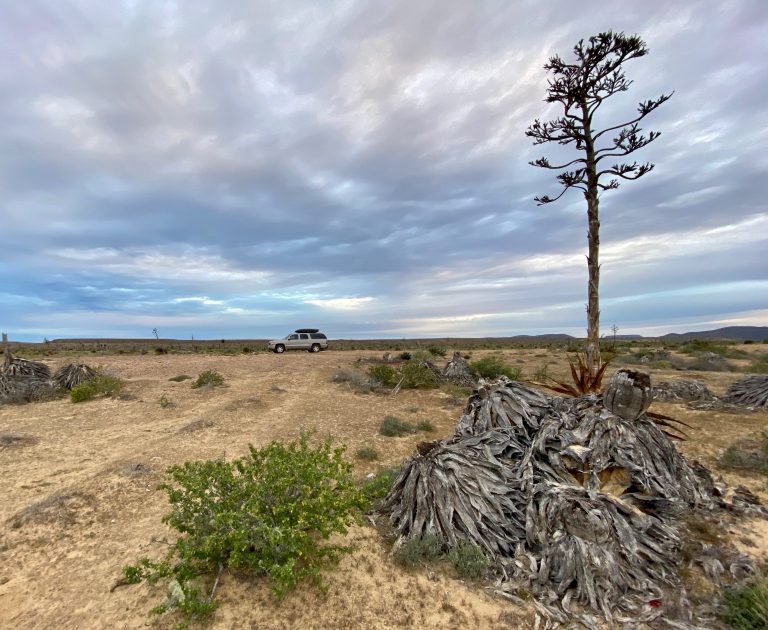 PrevPreviousPost #17: Thar she blows
NextPost #19: There’s no wrong way when there is no way-SusanNext