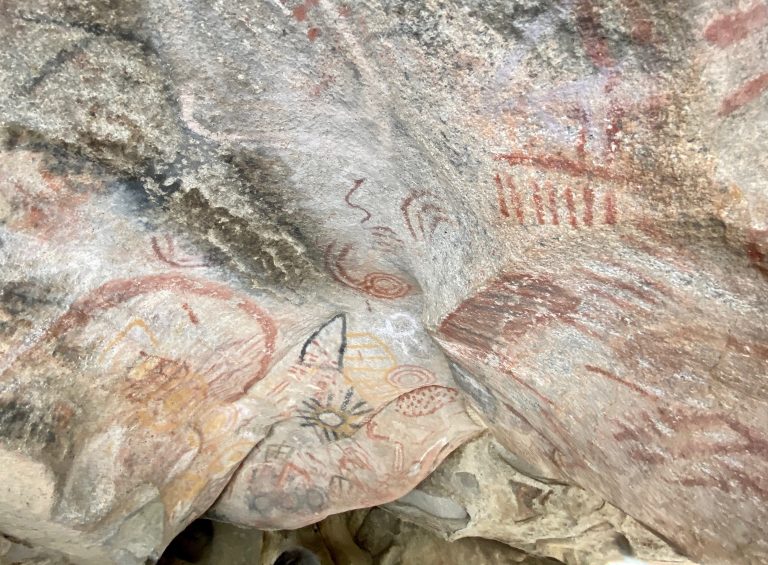 Post #19: There’s no wrong way when there is no way-Susan

I awoke around 3 am and stepped outside. There were no coyotes yipping this time but amazingly I could faintly hear the Pacific Ocean surf from nearly a mile away. What a great way to start my day, I thought. Back in the truck I dozed on and off while straining to hear the outside world. 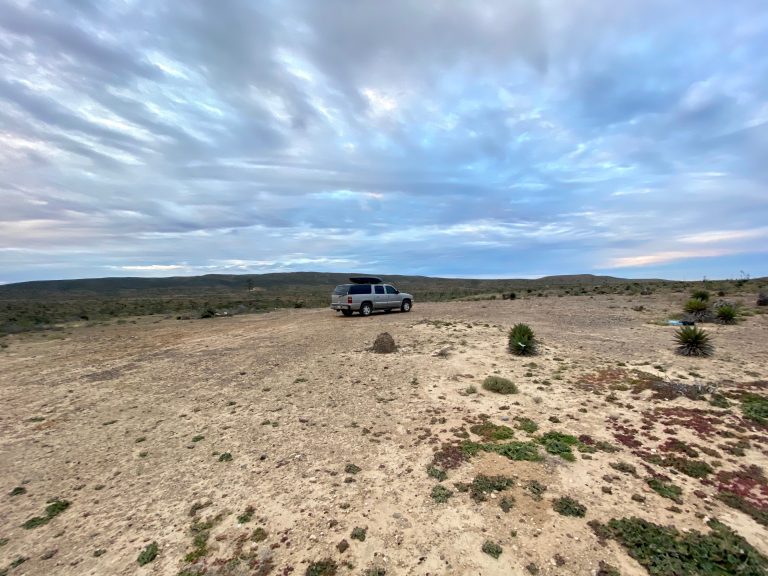 We left our campsite by 6:30 am and headed north, not knowing exactly where we were going or where we’d be sleeping that night. Both suited us. By now we knew to have intentions, rather than plans, in order to let the day go as it should and allow us to be open to experiences. 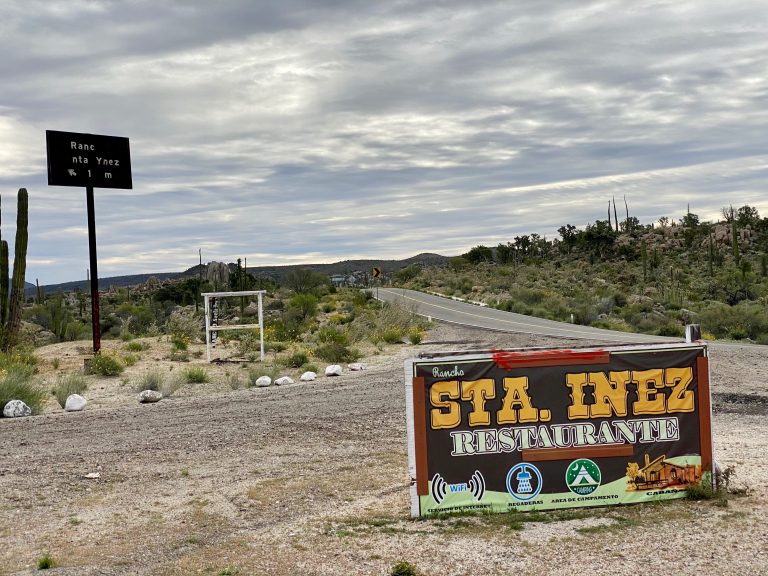 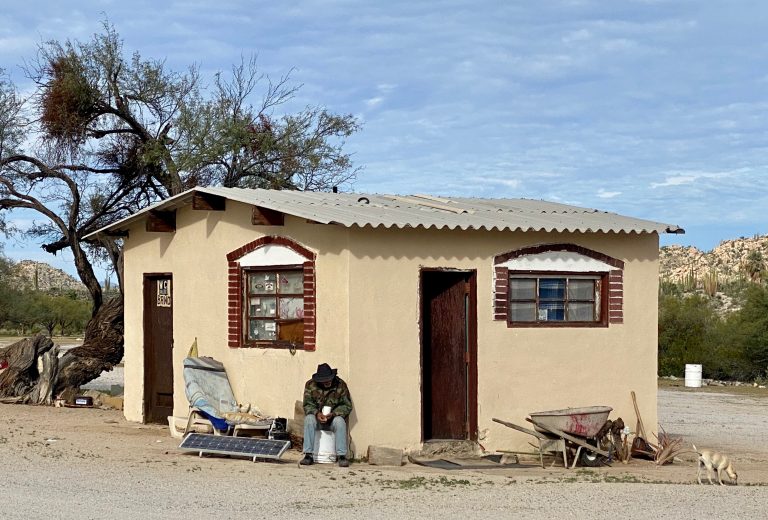 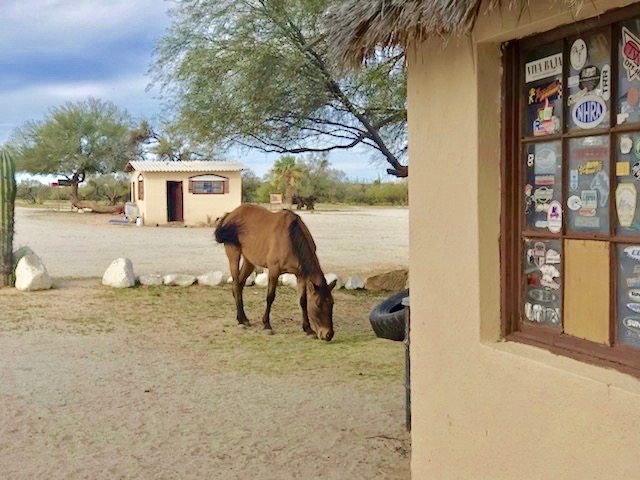 It was mid-60s and comfortable as we searched for a place to have breakfast. The area was mostly desolate and the few roadside restaurants we passed were closed, so after an hour or two we figured we’d instead need to pull off and make breakfast. Then we came upon a sign for a restaurant that pointed us down a very rough road. By now, we were used to them and didn’t blink an eye. At the end of the road were a few small buildings and in front of one of them was a hunched-over elderly Mexican man with a broad-rimmed hat and two white puppies playing nearby. Near him a horse wandered freely and we heard roosters crow. Seemed about right to us. 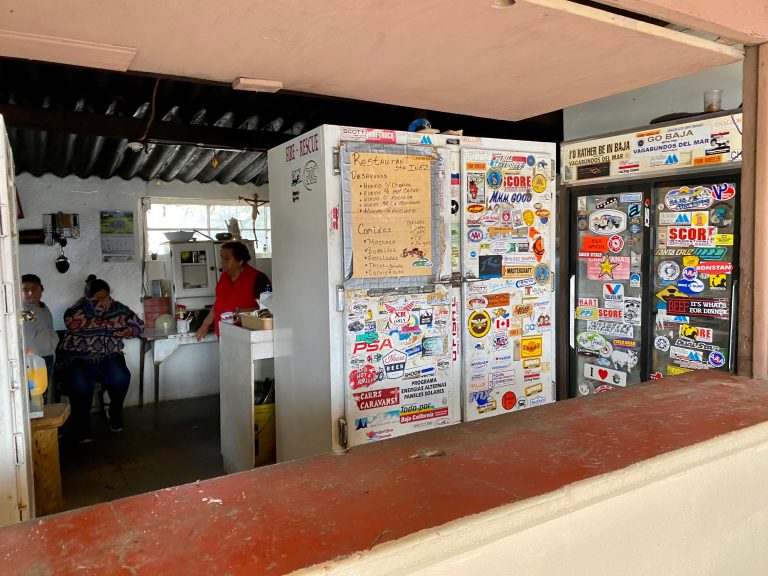 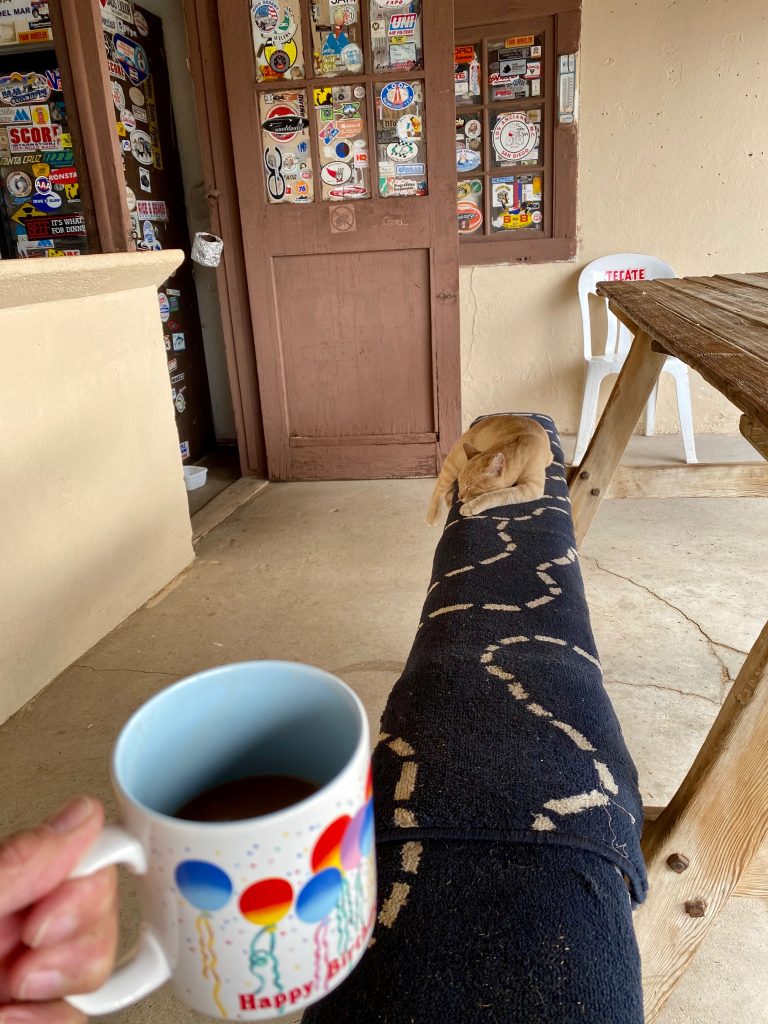 We found the “restaurant,” little more than a counter with a couple of old women behind it. The handwritten menu had few selections (some of which the woman in charge said she didn’t have) so I ordered the standard huevos rancheros and Susan ordered coffee. A cup with Happy Birthday printed on it filled with lukewarm water was set on the counter. We looked at each other and the woman pointed to a jar of instant coffee. Ah, ok. Not Starbucks. Then the woman got out an onion and fired up the stove. A cat lounged on the bench of the only table, unfazed by dozens of flies buzzing on and around him.

While she started chopping onions and preparing breakfast, we sat and wondered what exactly this place was. When I asked to use the baño, she pointed across a small courtyard to a door that turned out to be a small motel room. Inside the room were enough beds and bunkbeds, with mismatched bedding, for eight people. The bathroom was behind a curtain and was even worse than I expected. It beats an outhouse on the beach, I thought. But it didn’t.

Breakfast was served. Somehow we’d ordered two, so I set out to eat them both – Susan doesn’t eat much breakfast. They were amazingly good, with homemade tortillas and eggs from the chickens out back of the kitchen. Beans were brought out that were so good I was sure they were made with things I didn’t want to know about. 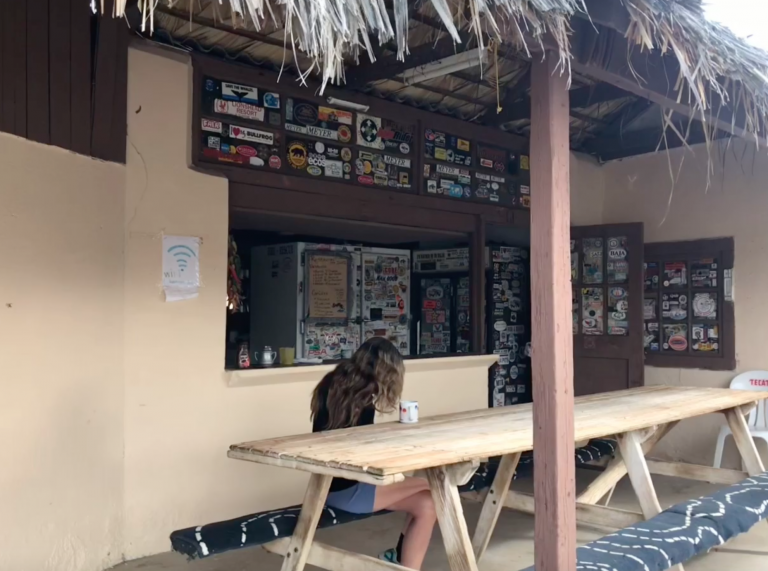 We settled up (about US$11) and drove back down the terrible road, amazed at the experience we’d had. It was a risk even going down the road, but we ended up with the best breakfast yet.

Satiated, we returned to the main road and drove many miles through a barren area of Baja Norte, rarely seeing any other vehicles.

That section of the road was so desolate that gas stations were few and far between. At one point, a temporary  “Pemex” gas station offered fuel from large barrels out of the back of a pickup.

Eventually, the flat desolate terrain completely changed. Giant piles of boulders interspersed with huge and unusual cacti appeared as the road wound around through the Cataviña boulder fields. 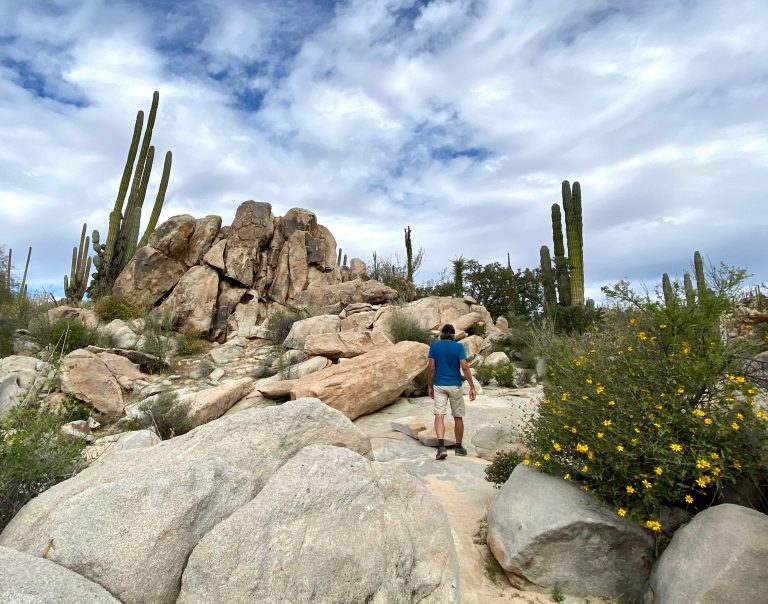 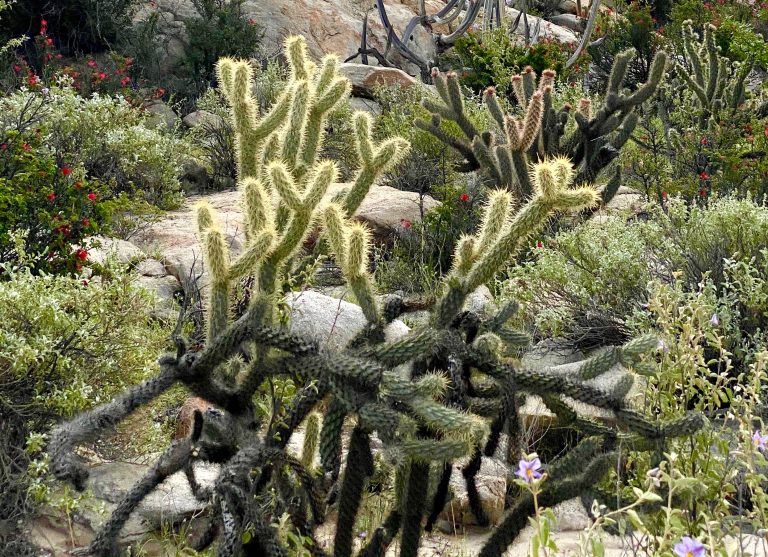 Susan suggested we pull off at one of the many dozens of dry washes alongside the road so we could do some bouldering and exploring. We had been driving for several hours and I readily agreed we needed a stretch break. We stopped at a random spot and started exploring. After walking  a few hundred yards, we heard unexpected voices. We were surprised because there were no cars parked off the road where we were, and there were few people anywhere at all within maybe 100 miles. Yet in the near distance people were climbing to the top of the same boulders we were exploring.

Near the top, we saw a group of five people. A man gestured for us to crawl into a cave and suddenly we saw a wall full of colorful cave paintings. By chance, we’d stumbled into a Mexican national monument. We’d hoped we would find some cave paintings on our trip but hadn’t so far and now we’d somehow found them just by luck. As we left, we saw there was a rundown, but more or less official, parking area just a bit further up the road with faded signs about the site.

As we headed north, we discussed where we might want to stop for the night. We were still hundreds of miles from the border. The road began to pass through small, sad, dusty, poverty-stricken towns, one after the other, each with several poorly marked topes (speed bumps) along with increasing traffic. There were no real options there so we kept going. Eventually we realized we were probably out of luck as the road kept passing through larger and larger towns as we got closer to Ensenada.

Soon, the road opened up and became mountainous and beautiful, but by now we were in a questionable part of Baja, close enough to the border that it might not be safe to stop and camp.

At one point, there was a road construction delay and we sat in the sun in a long line of cars waiting to drive down what had become a one-lane road. In typical Mexican fashion, numerous locals rolled carts or carried large containers of snacks along the side of the road. I joked to Susan that if only they were selling ice cream I’d get some. Two minutes later, an ice cream vendor came along. Susan and I had time to finish our cones just as the traffic started moving again.

With few options, we made the decision to cross back into the US and find a place to stay not too far from the border for the night. It would be many hours of driving, but this was not a part of Baja we wanted to stay in. We decided to cross at Tijuana, taking the toll road route. It was unexpectedly beautiful and undeveloped along the toll road from north of Ensenada toward Tijuana, reminiscent of the best of Highway 1 in California. Soon, resorts began to dot the landscape and, just as the toll road ended, we were in Tijuana. Driving a short way through the city was eye-opening. The stench of sewage made us recirculate the air again though we quickly discovered the air conditioning was not working (it turned out to be a broken drive belt). The visible poverty with rough shacks built anywhere a space was available contrasted sharply with the beauty we had come to know in Baja.

Ihe crossing itself was frustrating because we had the proper IDs to use the much faster Sentri lanes but they were so poorly marked we never found them until it was too late—we couldn’t switch lanes because of the throngs of Tijuana locals blocking the cars and trying one last time to sell their handfuls of goods. 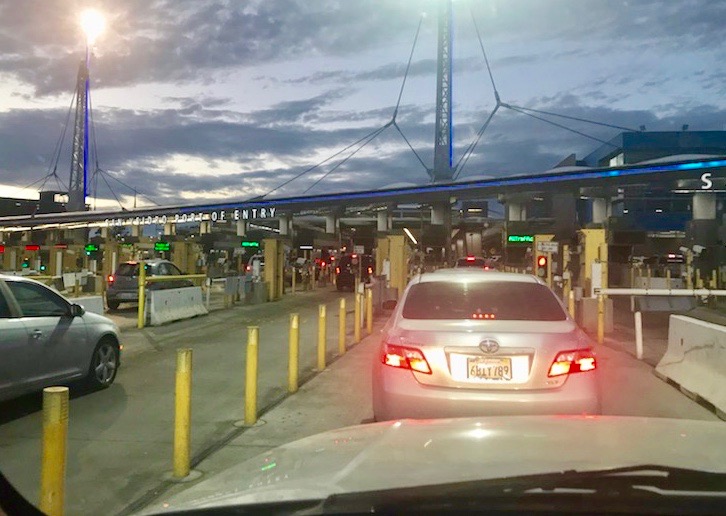 Instead, after waiting about 15 minutes, a bored US Customs and Border Patrol agent in a booth looked at our passports, asked a couple of questions and let us through. Just like that we were back home. And instantly onto an eight-lane superhighway. We followed it for a couple of hours then pulled off into a hotel in Laguna Hills just south of L.A. so we could stand under unlimited hot water and feel clean again.

We both felt the sharp change from self-sufficient living to spending way more money to get what you wanted. It was not entirely pleasant. We knew the trip had changed us – we were far more capable and we’d slowed way down and let our adventures unfold. We determined to bring these changes with us home and whenever and wherever we traveled next. We were eager for the next challenge.

PrevPreviousPost #18: Whales watching us
NextPost #20: On the way to Alabama. Hills that isNext