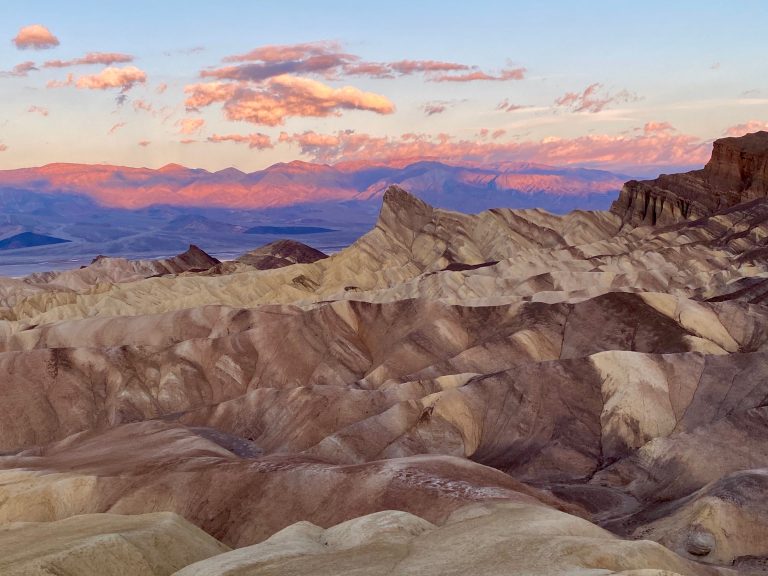 My phone was supposed to wake us at 6 am this morning and didn’t. We planned to take in the sunrise at Zabriskie Point, about 15 minutes from where we were camping just off a rough dirt road, still in Death Valley. It had been windy again the night before so we used the truck for a windbreak and made a simple dinner – hot ramen bowls and crackers. Fine. The wind had rocked the truck some again during the night and we were tired.

The next morning, we were victims of unreliable technology. Susan has a pretty dependable internal alarm clock though and woke up just past the planned 6 am wakeup time. She immediately checked the time. “We’re late. Get up!” We scrambled to get dressed and get out. Five minutes later, without even brushing our teeth, we were underway. 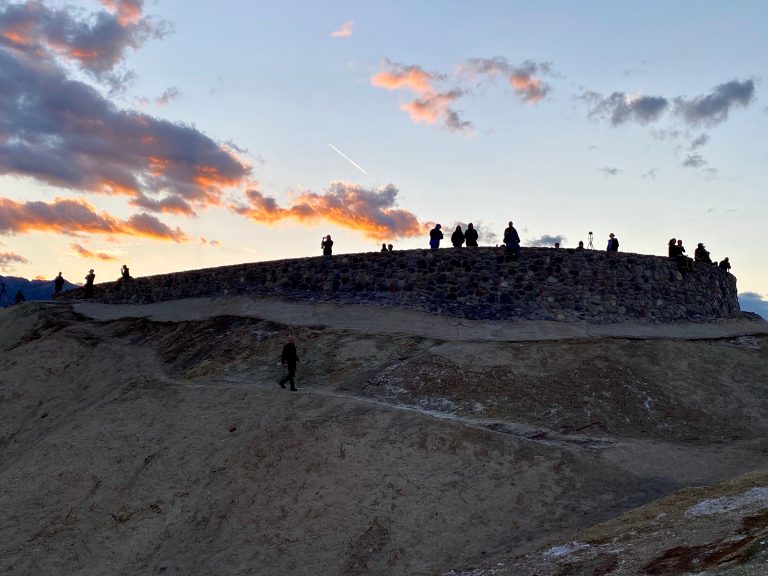 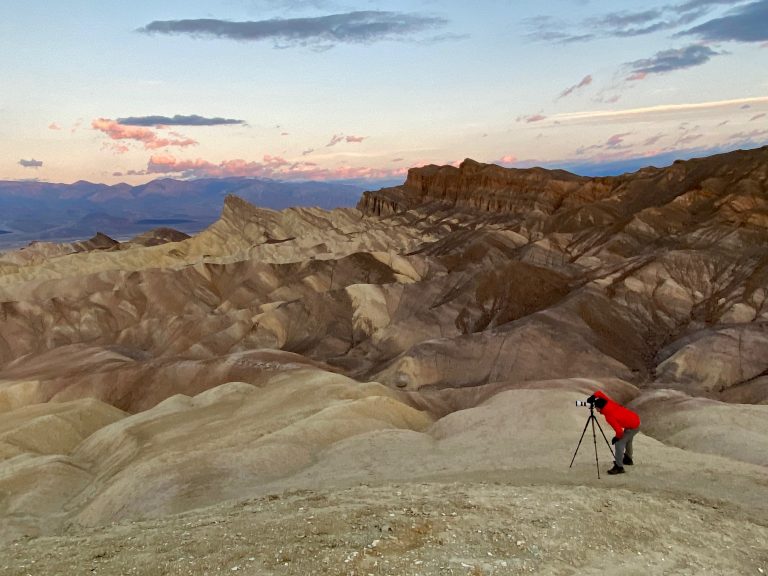 We were still rubbing sleep out of our eyes when we reached the lookout point. We quickly headed up the short trail and joined about 15 other early risers, some with tripods at the ready. 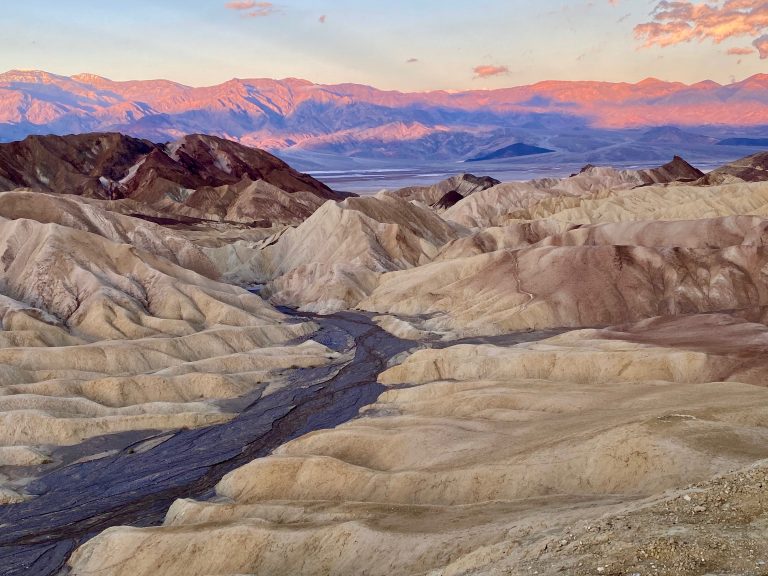 We spent the next half hour or so watching the sun brighten the colored hills in front of us. It was an incredible way to start the day.

Next stop, coffee and breakfast. At the Furnace Creek visitor center, we cleaned up, found a small picnic area, and started making breakfast. In the wind. Again. As the wind picked up, it was almost impossible to cook. We probably went through a quarter of a canister of propane because of the gusting wind. As I was cooking, I felt a bit annoyed at the situation, then thought about it. I was camping in a beautiful national park with no work obligations looming, the day ahead (week ahead) was free and the sun was shining. It was starting to warm up, partly because we were now well below sea level. I paused and smiled as the wind whistled in my ears. Could be a lot worse. Sometimes you just have to get perspective.

We left the visitor center area for a hike we’d heard about from people we’d met a couple nights before at the campground. Slot canyons, they said. Yes!

We drove south for an hour (Death Valley is a really big park) and en route to the slot canyons stopped briefly to explore the Badwater Basin salt flats. This part of the park is at very low elevation – ranging from sea level to almost 300 feet below – and was warmer and far less traveled.

After leaving the salt flats, we continued further south and, with some difficulty, found the turn-off for the slot canyon trail – the sign for the road was small with faint text. Mercifully, we had to go only a half-mile down a bad dirt road. There was no trailhead or sign at the gravel lot. Only one other car was there.

We started wandering up a faint, steep trail, hoping it would take us to Sidewinder Canyon, which was supposed to be one of the best slots in the park. We began the hike below sea level and climbed steadily uphill into a wide wash. It was obvious this wash took a lot of runoff during recent storms because there were many new water patterns in the sandy bottom.

Huffing and puffing, we entered a tunnel-like entrance and found Slot Number One off to one side of the hundred-yard-wide wash. We explored it as far as possible until it was too steep to climb. The second slot was equally interesting. 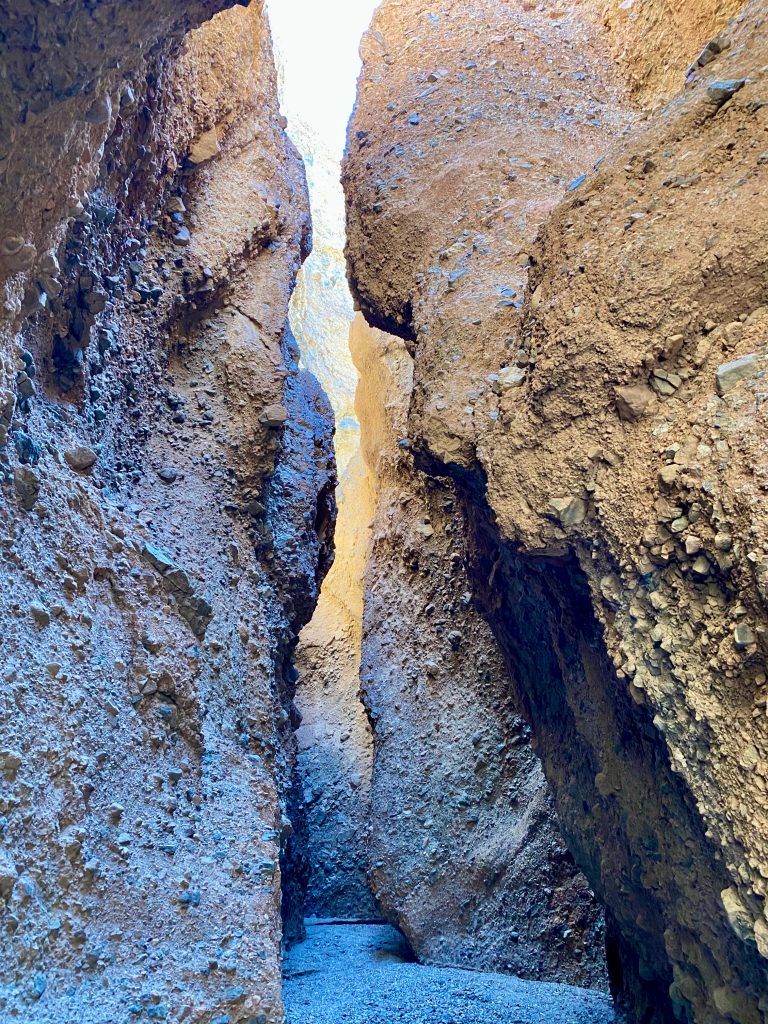 But it was the third slot, which we named “Slit Slot Canyon,” that was the prize. A half-mile of twists and turns up through the boulder-strewn and ridiculously narrow canyon had us grinning like kids. Much of the base was no more than three feet wide while the walls towered 40, 50, or even 100 feet above us. Two hundred and seventy degree turns led to a boulder scramble ever higher while the sand bottom became wet from recent rains that never made it out of the canyon.

The walls were fist-sized stones imbedded in hard dirt that provided perfect handholds for scrambling up five- or ten-foot dry waterfalls, with only a narrow view of the sky. In some sections, the sky was all but obliterated by the walls and darkness prevailed. The wind that had been so pervasive roared above us though it was perfectly still below.

On and on we twisted up through the slot, at times narrower than my shoulders, forcing me to turn sideways. 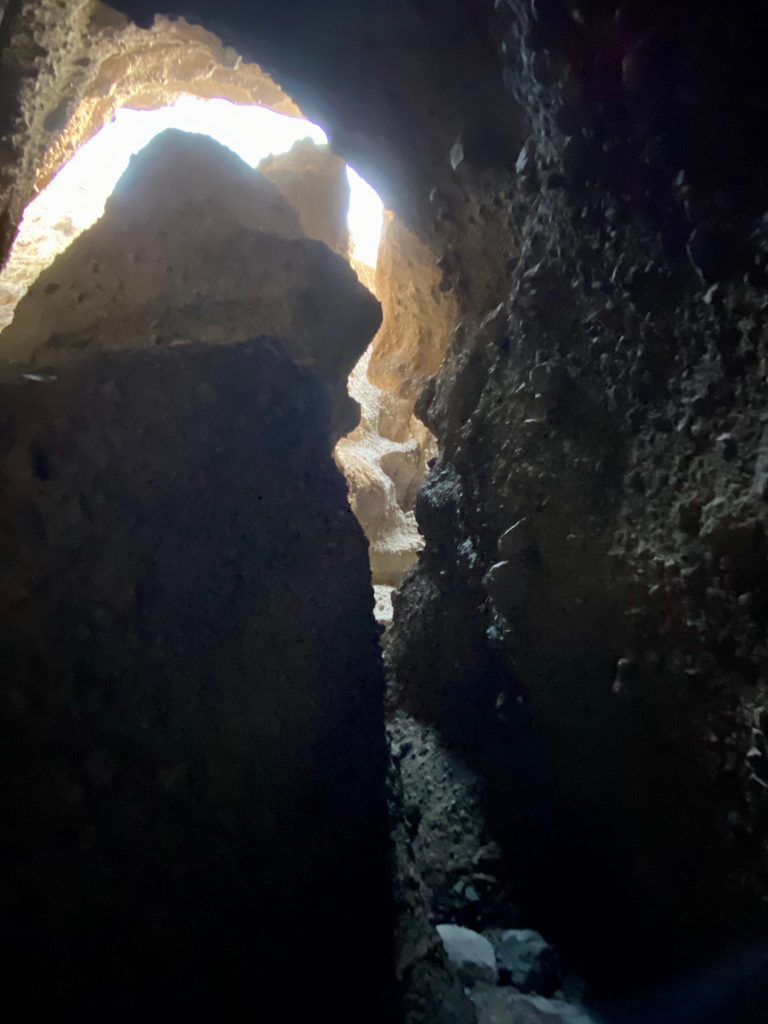 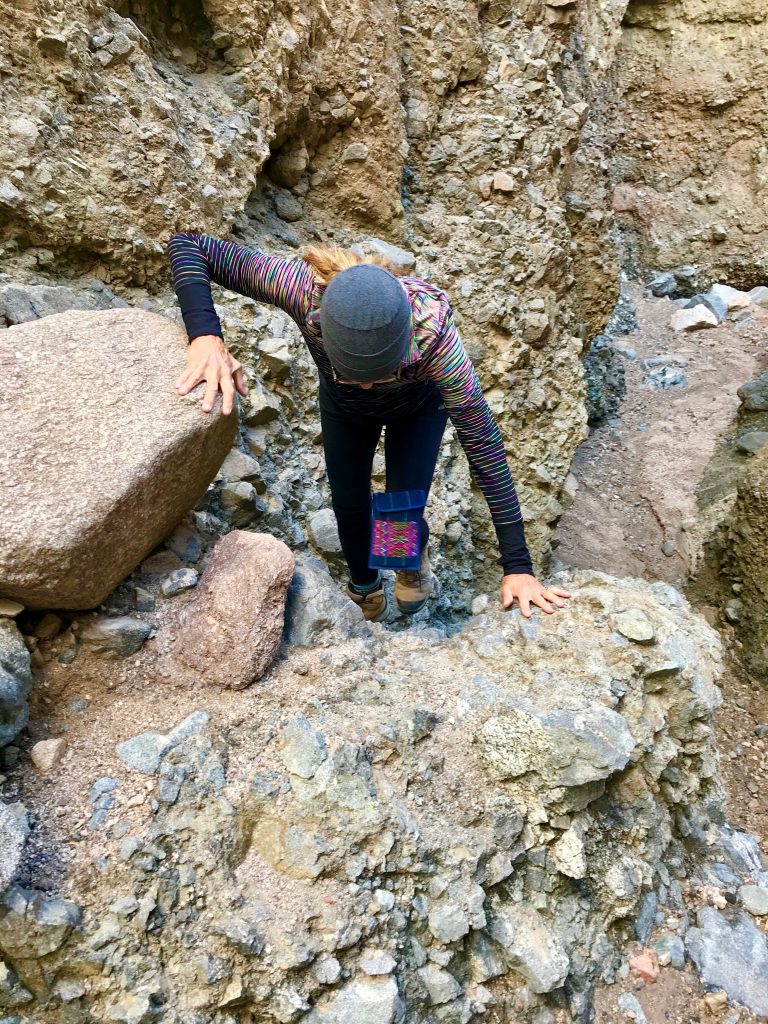 We’d be met by a large boulder that had tumbled down, blocking the way, or a dry waterfall or both and had to carefully find hand and footholds to continue. Small side canyons entered only to end high up in a dry waterfall. A trickle of water on the rocks increased the challenge.

Finally, a giant boulder blocked the path. We wanted to get over it because it seemed like we only had a few hundred feet more to the top, but getting back down from it would be too dangerous. We stopped and looked around, almost amazed that we’d been let in such a beautiful and dangerous place on our own. It was apparent few people dared the Sidewinder (and fewer still the Slit Slot), but once again we found that pushing a little harder to get to the lesser traveled parts of the park (or anywhere for that matter) is how we find true fulfilling adventure. 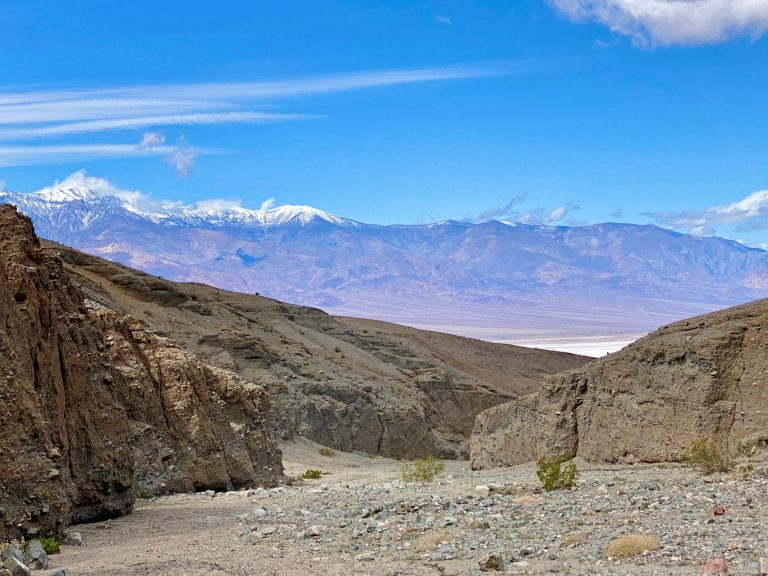 As we hiked back out, we could see the sprawling valley below with snow peaks beyond. The vastness starkly contrasted to the narrow passages we had just traversed.

We left the canyon, headed out of the park, and went to the small town of Shoshone to gas up. The truck’s 32-gallon tank gave us great range but it was time to feed it again. The gas in the small town though was $5 a gallon, so we continued 25 miles farther to Pahrump and paid $2.50 a gallon. There we found a Walmart and went inside to re-provision, only to find many empty shelves and a horde of slightly panicked shoppers trying to stock up against the coronavirus. It was our first stop in a town in several days and we hadn’t known the level of concern for the virus. We bought a few things and went down the street to Albertsons and found slightly more sanity and food.

We continued to Henderson Nevada, outside of Las Vegas to find a hotel where we could use our hard-earned Marriott points to stay for free. Unlimited hot water, clean hair and shaved later, we went out for dinner at an Olive Garden that was walking distance from the hotel for a hot-cooked meal that we didn’t have to prepare ourselves in the wind. We hoped for a quiet night before we could again escape the city and head back to the land.

PrevPreviousPost #22: Over the rainbow
NextPost #24: The valley and the lakeNext