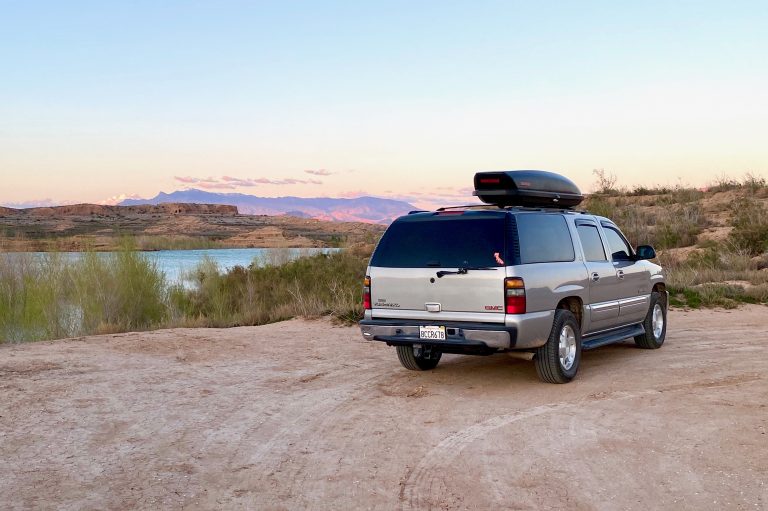 Refreshed, we decided to spend some time in our hotel, taking care of business – phone calls to family, canceling our May trip to Italy due to the virus (it’s sad how so many hours of planning can be undone in a few keystrokes and a couple of phone calls) and planning our next days.

Time seems to get away easier when you’re uncertain. Many options presented themselves but it came down to weather. We didn’t leave prepared for cold weather and were expecting 70’s and maybe 80’s. Forecasts become less accurate as they extend and ours had changed substantially. Gone were the sunny icons on our weather apps, replaced by wind, rain and temperature numbers starting with 5’s and 6’s. But Valley of Fire State Park in Nevada, known for its red sandstone formations, looked special and was only 75 minutes away, so we headed north.

There was a long line of cars at the entrance to the park. Not a good sign. We’ve learned from living in urban areas including the outskirts of Washington, DC, as well as in small towns like our current one in California, is that anywhere there’s a large metro area population of people, outdoor recreation gets crowded and tends to suffer from overuse and abuse. The huge metro areas have millions of people and if just a small percentage feel like “getting away,” areas get very crowded. Not so in smaller areas where the same percentage of people want to get away but only a fraction of the number of people actually get outside. That’s a long way of saying Valley of Fire State Park, on the outskirts of Las Vegas, was way too busy for us. The campgrounds were all full. Parking at the visitor center was limited to the overflow lot. Plus, the two state park employees we interacted with were rude. 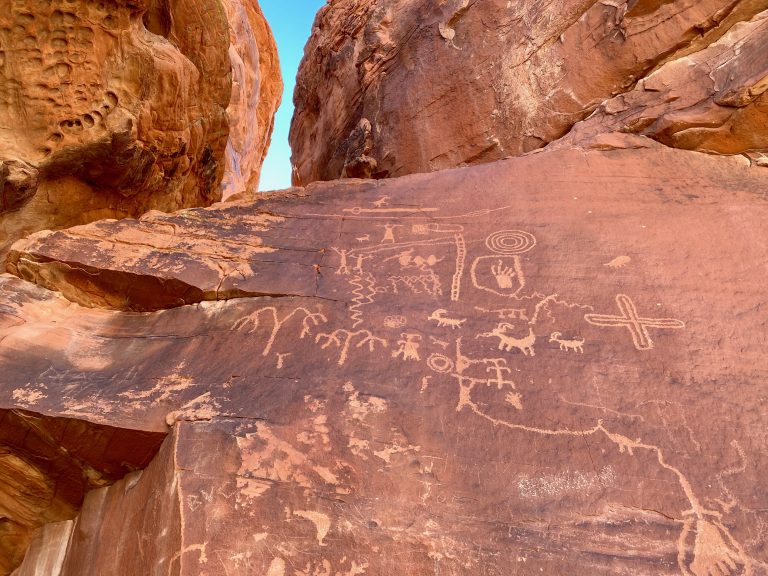 Exploring the park, we, stumbled once again upon petroglyphs. The curious thing about these petroglyphs is that they’re located on a sandstone boulder perched maybe 75 feet above ground. Visitors can see the rock art by climbing a metal staircase, but how the artists reached the boulder was baffling. 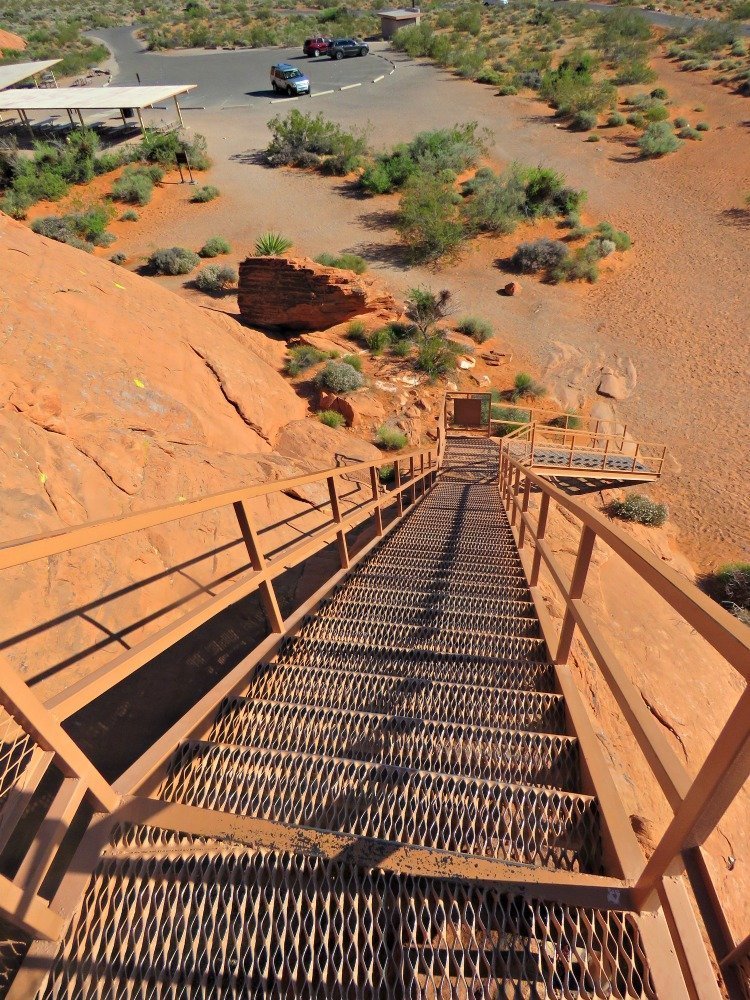 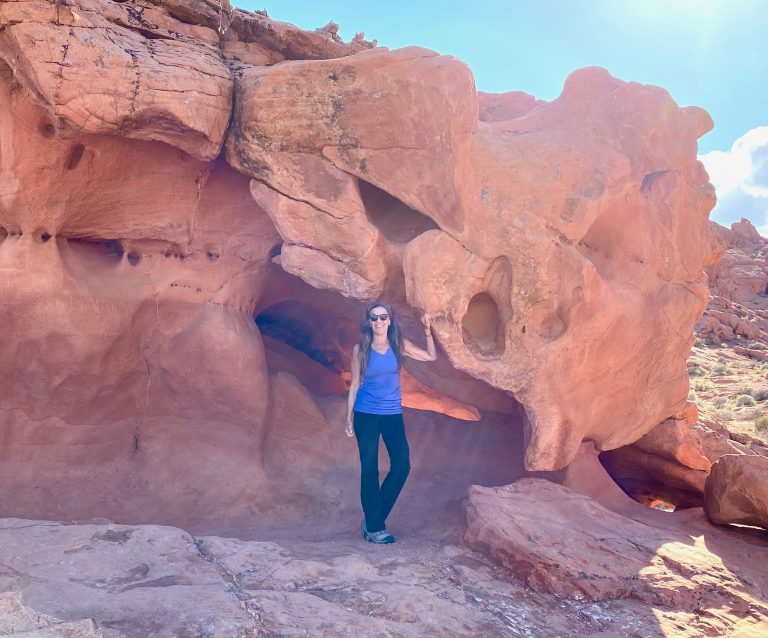 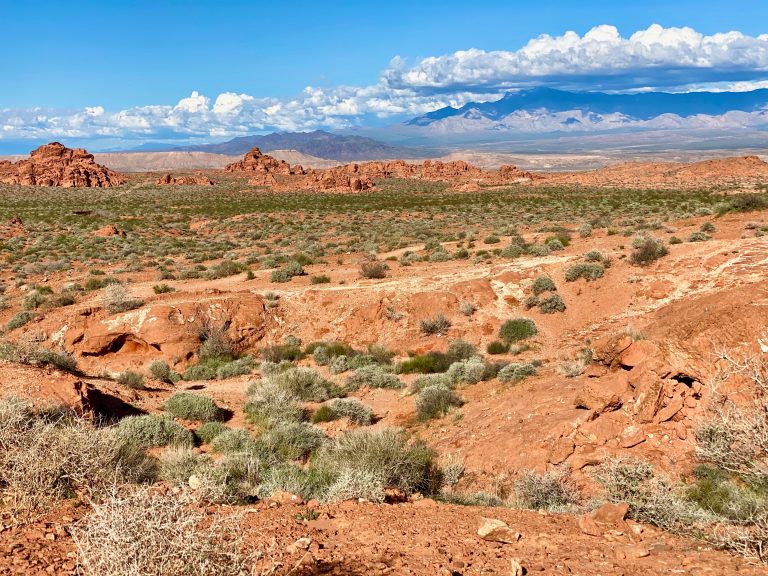 After checking out several beautiful red sandstone features, we were ready to leave our $10 at the park and go elsewhere.

The question was where. We looked over our maps. Not ones to give up easily, we considered going to the Mojave Desert, but forecasts were for cool days and cold nights and even rain there. Maybe Death Valley again? Something else we’ve learned over the years is not to try to force a trip. Sometimes it’s better to go home than try to make something out of nothing. Going back to Death Valley meant retracing our steps (something we’re loathe to do too soon) and going to area we didn’t go to before – basically the second-string places. We didn’t want that either. We looked farther on our maps. Utah? Too cold still. Arizona? Same. Mexico? Don’t have passports with us. The freedom to travel as we do is wonderful and the ability to even have the choices of where to go is something we know should be treasured. And we do. And we also know that sometimes the trip tells you it’s over. Not that you can’t pick it up later or modify it, but when it’s done, you should let it go. So, we made the decision to head home the next day. It would be a long drive – probably 10-12 hours – but our route would take us down many new roads and as we went north, we’d likely run into a winter storm on the way home. We actually like storms and thought that could be fun. We’ve got a capable 4wd truck and worst case, we can hole up somewhere (glad we brought the extra blanket). The news told us that most public places were soon closing (restaurants, bars, movies, sport events, etc) due to the coronavirus so we decided we’d go home, soak in the hot tub, cook fun things and maybe I’d do some real (read: paid) work. All the while, we’d be exploring ideas for new places to go. Alaska is top-of-list and planning that can take weeks (or hours, but if you like planning, weeks).

We decided to head toward BLM land at nearby Lake Mead to find a spot to boondock. We found a beautiful, quiet spot along the shore of the lake and struggled to keep the stove ablaze to cook dinner against the relentless wind. But when night came we were cozy in our truck as the wind howled and Lake Mead waves lapped a few feet away. After a good night’s sleep, we’d wake early, turn the key, and head home. Probably.