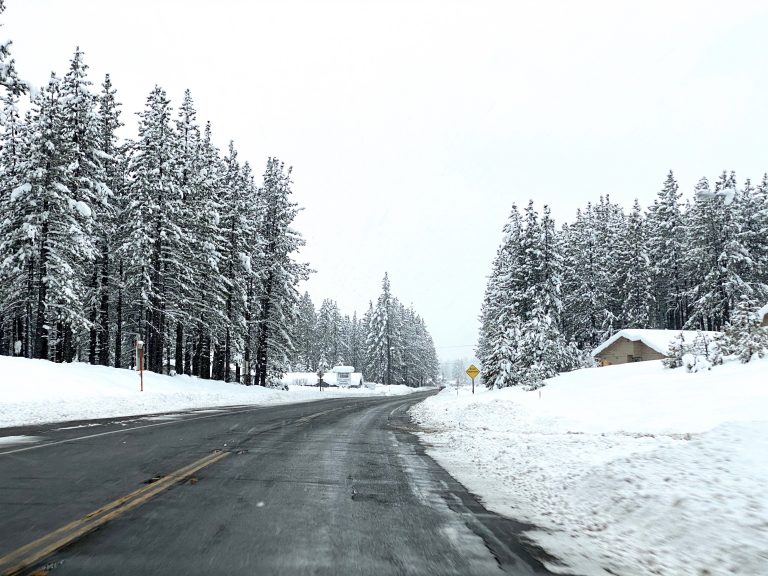 Post #25: Home is on the other side of the mountains

We woke at daybreak and took a short walk along the lake’s edge. Our campsite next to the lake was peaceful and pretty with the water stretching south for miles and the smooth hills around us just waking up. 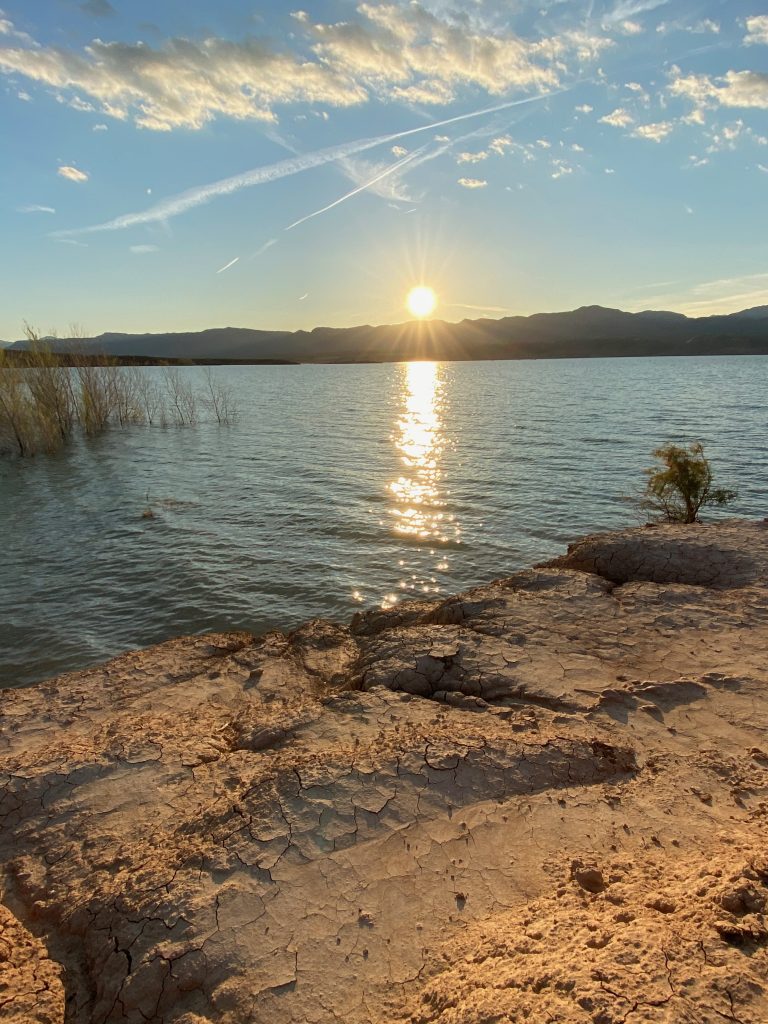 We had a barely usable cell signal but could tell from the news we were able to get that the coronavirus was getting serious, so we decided it best to head for home. To do that though, meant crossing the Sierra Nevada mountains somewhere. The Sierra runs 400 miles north/south mostly through California and there are only a few ways across it, all of them high elevation and most would be closed from the winter snow until at least late spring. Home was almost 700 miles away no matter which route we took and we knew it would be a long drive, especially with a late winter storm coming. We decided against one crossing that would take a substantially longer, out-of-the-way, and boring route that would first go back south past Las Vegas, then east to Bakersfield, and then north on I-5. Another route would head north on CA-395 along the eastern side of the Sierra range in California, but that would mean retracing the route we took when we drove south. Not quite wanting to admit the trip was over, we decided instead to follow a route offered by our GPS that would have us going north on back-roads through the high desert in Nevada and we hoped we could take the mountain pass north of Reno. We’d packed up our camp the night before and shortly after waking we were underway.

Listening to the radio as we drove, we heard that many places were shutting down, including restaurants. We discussed pulling off and cooking breakfast but about an hour into our drive we spotted a tiny restaurant in the small town of Moapa, NV with an “Open” sign. We were the only people in it and afterward as we left, we decided to start using the small bottle of hand sanitizer we happened to have with us. 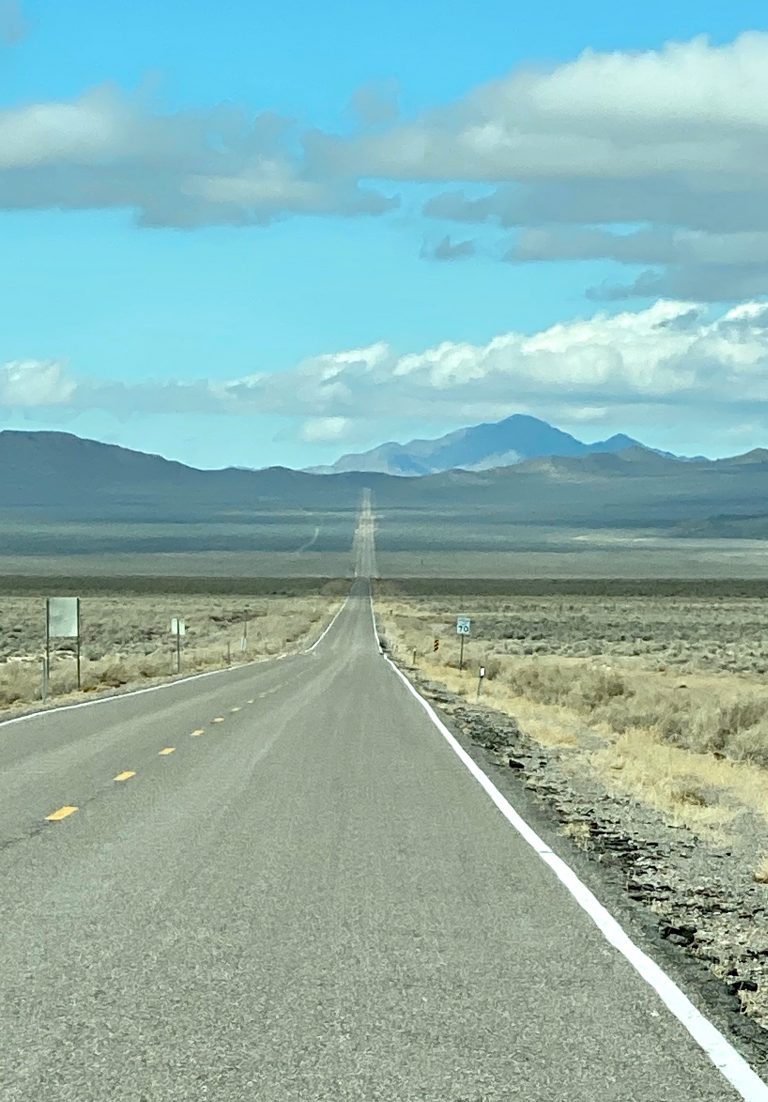 Back on the road after breakfast, we drove a long way through very little. Not that that’s a bad thing – we love taking little-used roads when we can and we saw almost no traffic most of the day.

On some straight stretches of the road, we could see for 20 or more miles ahead. If we had a fast car, I thought, this is where we could open it up. The truck, with its roof top carrier whistling in the wind, wasn’t in the mood to go much over the 75-mph speed limit. 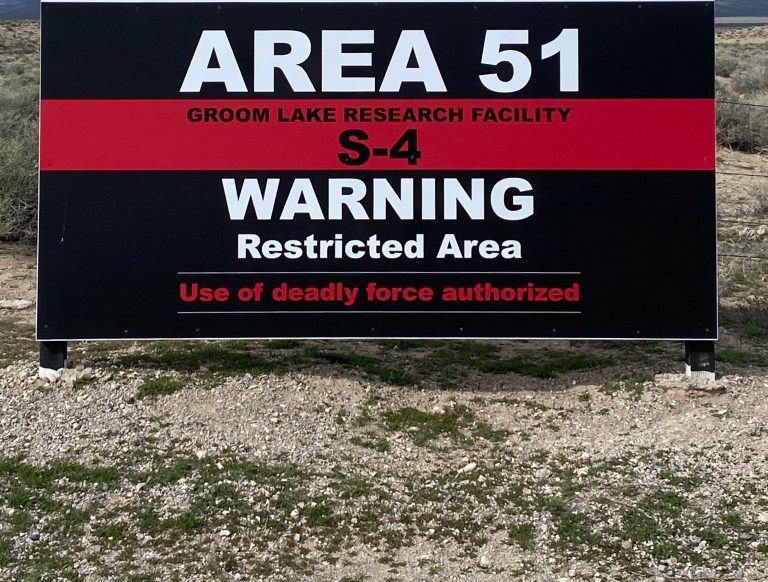 Then things got weird. At one point, the GPS had us turn onto the Extraterrestrial Highway (that’s what the State of Nevada actually calls it), which passes as close as you can get (legally) to Area 51 – a highly classified US Air Force testing range that has resulted in conspiracy theories and reports of UFO sightings.

Within a short distance of our turn onto the road there was a strange little building with a giant metal alien in front of it that apparently sells lots of Area 51 merchandise, though it was closed when we pulled into the parking lot. 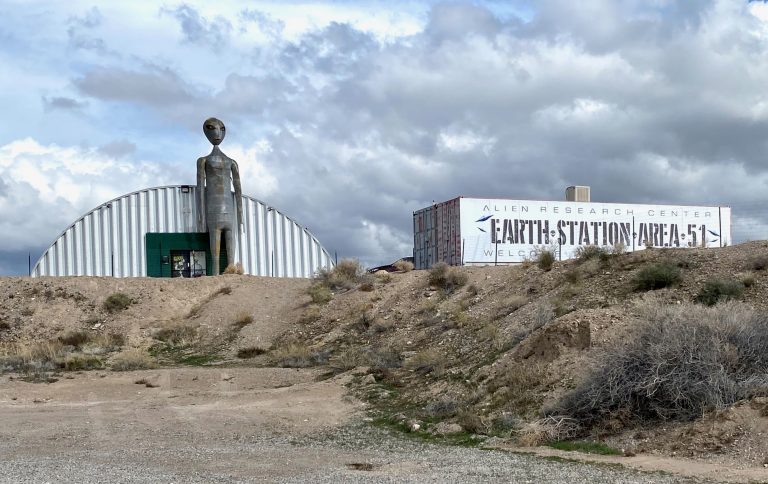 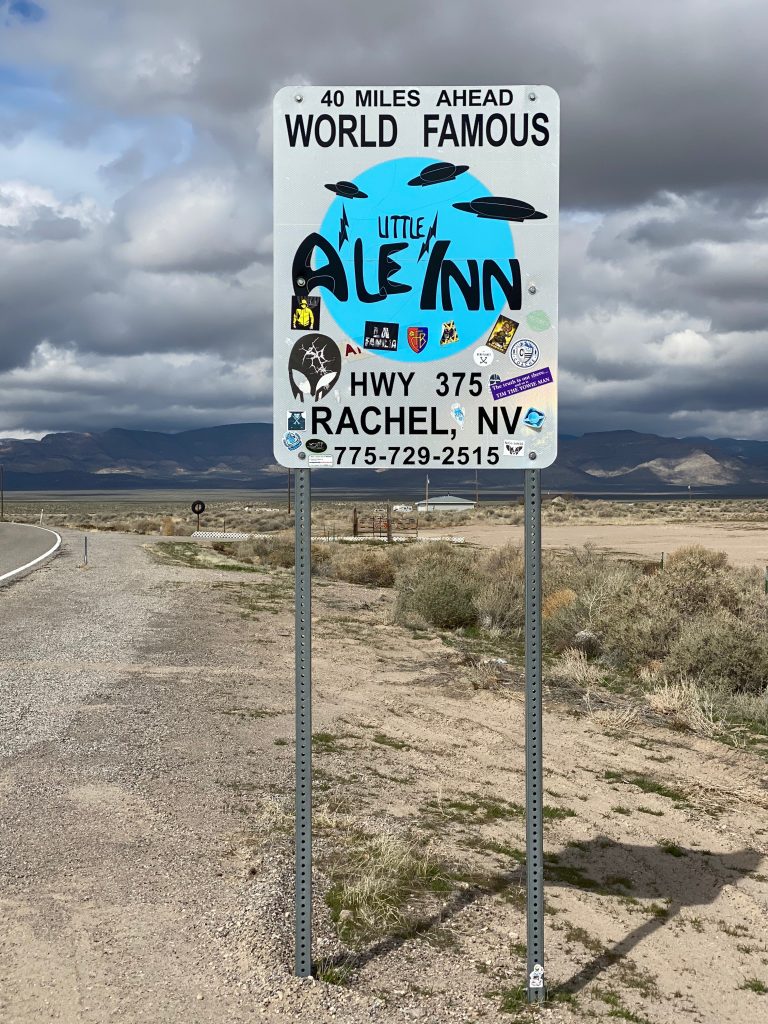 Eventually, the Extraterrestrial Highway passes through Rachel Nevada, which is where some of the loony Area 51 aficionados congregate. It was one of the most depressed towns we’d seen since we were near the Baja Mexico border, with dilapidated buildings, some old trailers, a pricey gas station, and one ramshackle bar/restaurant. The drive goes through the desert, and with the terrain, huge sky, and empty road, there was a feeling of eerie isolation. Sadly, though, we saw no aliens.

The road continued to pass through tiny towns, some of them no longer inhabited. We wondered what people out here did for a living – or anything else for that matter. Soon, even the tiny towns disappeared and all that remained was an empty two-lane road through a vast high elevation desert-scape, mountains on the horizon.

Eventually, the road passed along the shore of Walker Lake. While pleasant enough to see water in the desert, the lake didn’t look especially inviting and had a very strong wind blowing its surface into white caps. After several more hours of good two-lane highway, we finally made it to Reno. By now, the sky was darkening, the air was much cooler, and the forecast over the one open mountain pass was not good. In Reno, we decided to make a quick stop at Costco, figuring we could stock up on some of the things we’d heard on the radio that were getting harder to find. Mistake. The place was mobbed and the few things we wanted to pick up were out of stock, something we’d never seen at a Costco. We gassed up and continued, jolted by the cool weather that was coming from the mountains – right where we were heading.

From Reno, the most direct route home was I-80, but our GPS informed us that it was closed due to the accumulating snow at higher elevations. This was not a surprise – I-80 crosses Donner Pass (of Donner party fame). The only available route toward home was CA 70, which was a longer route that would take us north over a slightly lower pass, but through a much less traveled area, mostly on a 2-lane road. But that route was the only one available and it would also eventually bring us to within a couple miles of the turn off to home.

It started to rain soon after leaving Reno and within about 15 minutes, just as we began climbing the pass, the rain turned into snow. Twenty miles in, there were already a couple of feet of snow on the ground and soon it started snowing harder. What little traffic there was thinned out and we were on our own. Fortunately, the truck is made for such conditions and I hit the Auto 4WD button. Heated outside mirrors melted the snow accumulation and the fog lights lit up the edges of the road, now that the sun had set. A three-hour drive through a snowy mountain pass lay ahead. Eventually, heavier snow began falling and we slowed as we climbed ever higher, three or more feet of snow along the side of the road where the snowplows had been busy. Even if we’d wanted to find a place to pull off for the night to camp, we wouldn’t have been able to see any side roads, so we kept going. Finally, we crossed over the pass and started descending, which was in some ways worse, having to brake on the slick road. I kept an eye on the outside temperature, hoping to see it rise above freezing, but it seemed to take forever as we drove mile after mile down the twisty slushy road with snow still falling. Fortunately, I knew as we went down, the snow would eventually turn to rain.

We eventually reached a point maybe two hours from home here we’d been on the road before and the familiarity during the final stretch was reassuring. The snow had finally turned to rain but it was nighttime and the darkness added to the difficulty of driving on the narrow, twisting, slick road. By this point, we were both exhausted after driving since daybreak and traversing well over 600 miles so far, much of it in bad weather. Perhaps the day felt particularly long because it began in the sunny southern desert and continued through mountains and snow.

At last we reached the turn off to the road that would lead us home. It was nearly midnight when we pulled into our driveway. We collapsed onto the bed; the unloading would have to wait until the next day. We were glad to be home,  knowing it was only a matter of time before we’d want to be on the road again. But the coronavirus had other ideas and it would be nearly a month and a half before we ventured out again.

PrevPreviousPost #24: The valley and the lake
NextPost #26: Faeries and a castleNext