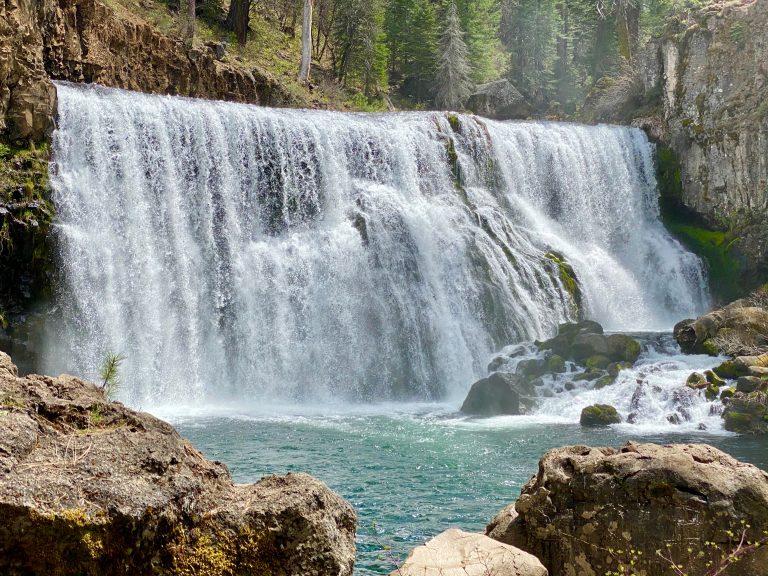 Post #27: A waterfull day – a lake, a spring, a river, and three waterfalls

The skies clouded overnight and the temperature didn’t fall as much as we’d expected. We both slept warm and comfortable on our cushy mattress and felt refreshed as we inhaled the morning scents through our screen-covered windows. We made breakfast and coffee and lingered in our camp chairs as the clouds hid, then revealed giant Mt. Shasta in the distance. Eventually, we broke camp and descended the short but steep hill, picking up a couple of new “pinstripes” on the sides of the truck due to some branches. I used to cringe at the sound, but now I felt it was a badge of honor, as we racked up more and more of them. 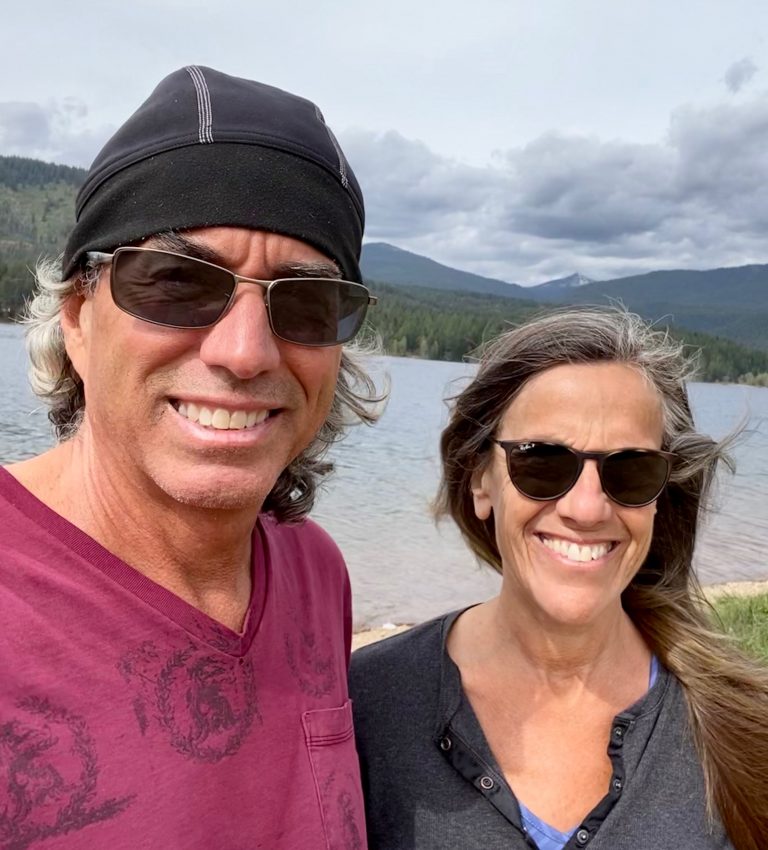 We drove down the road that had taken us to Castle Lake. Within a few miles, we turned into a parking lot at Siskiyou Lake. After walking down a pretty trail to the water, with Mt. Shasta once again looming in the distance (but this time partially hidden by clouds), we discovered a 7-mile trail circumnavigating the lake. We drove around to the far side of the lake and found some remote places to camp in the woods near the shoreline. Along a small section of the trail we came across one campsite where children had built a fort just above the lake. Siskiyou Lake would definitely be added to our list for future hiking, camping, and kayaking.

We drove around to the far side of the lake and discovered places to camp in the woods near the shoreline. We walked along a small section of the trail and came across one campsite where children had built a fort just above the lake. Siskiyou Lake would definitely be added to our list for future hiking, camping, and kayaking.

Back in the truck, we decided to make another stop before heading to the falls. During the night when I’d stepped outside the truck, I could see a few twinkling lights far below in the town of Mt. Shasta, a place we’d whizzed by on the interstate but never stopped. Now we wanted to see it. It was worth the stop. Both of us were happy to find a small funky hippy town at the base of the giant snow-covered mountain, though most of the town was closed due to the coronavirus. Mt. Shasta reminded us of Ashland Oregon, only a few hours north that was likewise full of hippies. Unlike Ashland, it appeared Mt. Shasta did not also have expensive boutiques and upscale restaurants and felt more authentic.

We found a city park where a few long-haired, long dress-wearing, counterculture types were hanging out in the parking lot, some obviously traveling through in their hippy cars and vans. We got out and followed a couple down to a small natural pool into which a small spring fed. Several people were patiently waiting their turn (with the suggested six-foot distance from others) to fill up water bottles and even five-gallon jugs direct from the spring coming from the side of a small hill. The water was said to be purer and more spiritual than tap water. We watched as more people reverently came to fill up with the special water.

A sign revealed that this was the headwater of the Sacramento River. We promised ourselves we’d be back to explore the town more when it was reopened after the worst of the virus passed.

From the town, we headed to the triple-header of the day, the cleverly named Lower, Middle and Upper Falls on the McCloud River in the Shasta/Trinity National Forest. That part of northern California was even more beautiful than I thought it would be. Miles and miles of good roads led through national forest land and at times snow-covered Mt. Shasta and other mountains could be seen towering over the land. The parking lot had only a few cars in it (it was a Wednesday) and we had a quick lunch at the nearby picnic area before we headed up the trail.

We didn’t have to go far – the Lower McCloud Falls could be heard from the picnic area and parking lot. A ten-foot wide stream flowed 15 feet into a large pool of water, surrounded by rocks and boulders. Many more boulders and rocky areas surrounded the river with many places to lounge while listening to the falls or feeling the spray.

We hiked up a trail above the river in a forest of pines, spruce and firs, knowing the Middle McCloud Falls were supposed to be even better. They were.

A hundred-foot wide cliff of water fell 60 feet into the river below. It was spectacular. We bouldered our way down to the river and sat on a large rock as the spray and wind from the waterfall washed over us. It was 75 degrees and sunny and the mist felt cool and clean. 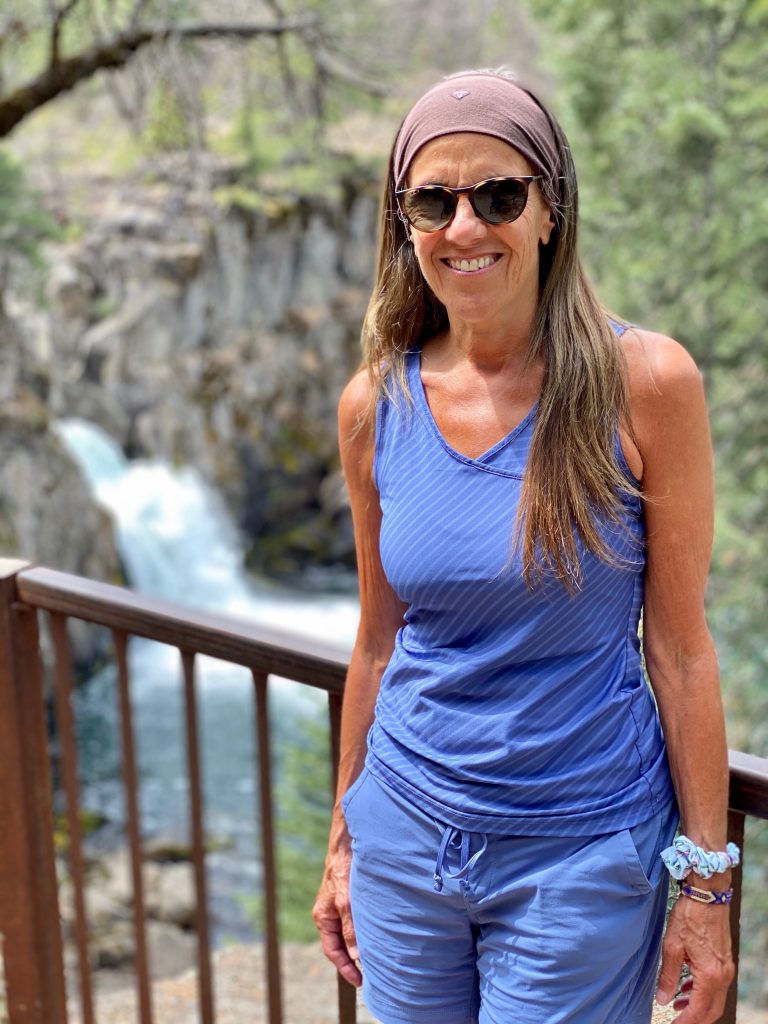 Eventually we hiked another mile and a half and found Upper McCloud Falls, where a narrow part of the river sped up the water causing a thundering waterfall to rush into a small pool below. The sound was deafening and the spray flew high.

We decided to venture a little farther upstream along the now narrower trail. Few people go past the third falls, so we had the beauty of this portion of the rushing McCloud River to ourselves.

The steep five-mile hike had shown us three beautiful falls and a stunning river. We felt waterfall satiated. 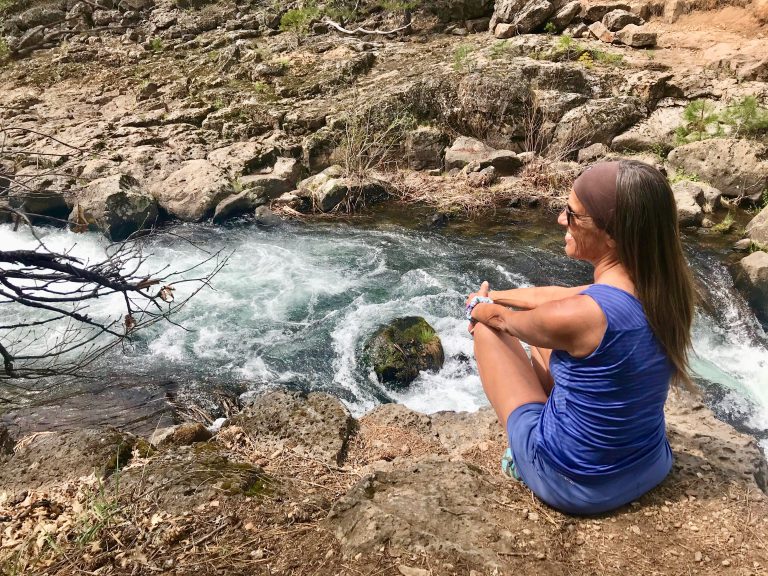 After we hiked back down to the truck, we headed east deeper into the forest looking for a place to camp for the night. We had set the bar pretty high the night before and we hoped to find something at least close in beauty. Several times we pulled off the highway onto dirt roads, looking for a nice campsite but were foiled every time – not pretty, not level, too hemmed in. In the national forest, our last resort is to pull off onto a small road and simply set up camp. But, we’ve learned that we can usually find something special if we keep looking. We drove many miles and found some backups but not the right spot.

At one point we found ourselves on a large hill covered with wind turbines. Interesting, but we didn’t want to be camped under the whirring, buzzing power-makers. Plus, we guessed the utility company might not be too happy to have us camp there.

Then, as evening approached, we turned off of a long dirt road onto another smaller dirt road that began climbing. It was beautiful but narrow with no places to turn off. Eventually, after climbing a thousand feet, we saw a truck-sized turnoff under some giant old oaks with pines swaying high above in the wind. That was it. We knew no one would be coming down the deserted road so we set up camp and had dinner. Even though we’d climbed a long way from the beginning of the road, we were still far lower in elevation than the night before and it was much warmer. We made dinner and watched the sun go down over the mountains. That night, the sound of wind in the trees – and nothing else – lulled us to sleep.