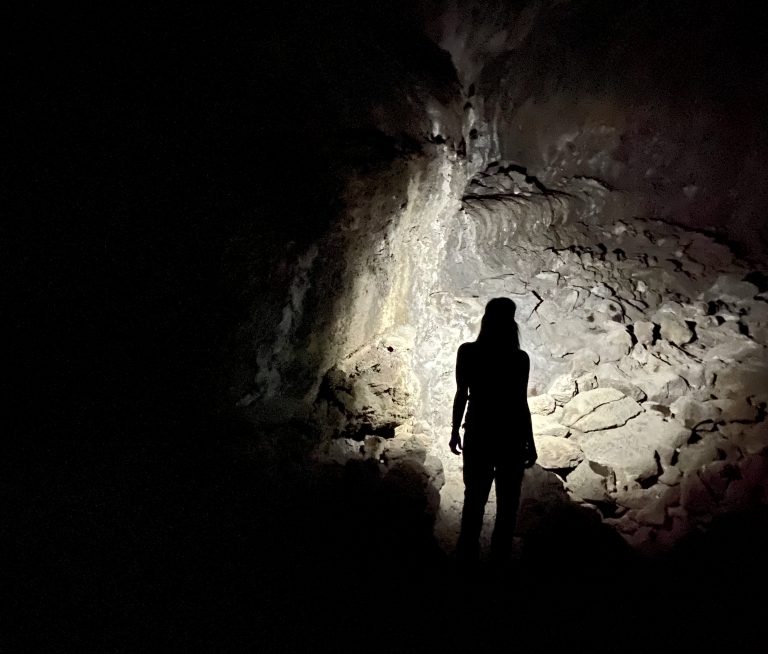 I stepped out of the truck at about 2 am and looked at the sky. It was hard to believe how bright Venus was but I was a little disappointed to see a cloud. Then I realized it wasn’t a cloud but an incredibly clear view of the Milky Way. With no light pollution for many miles around, the sky was phenomenal.

We breakfasted and coffeed sitting in the sun, right in the middle of the forest service road. No one came by the night before and we were sure no one was coming today. 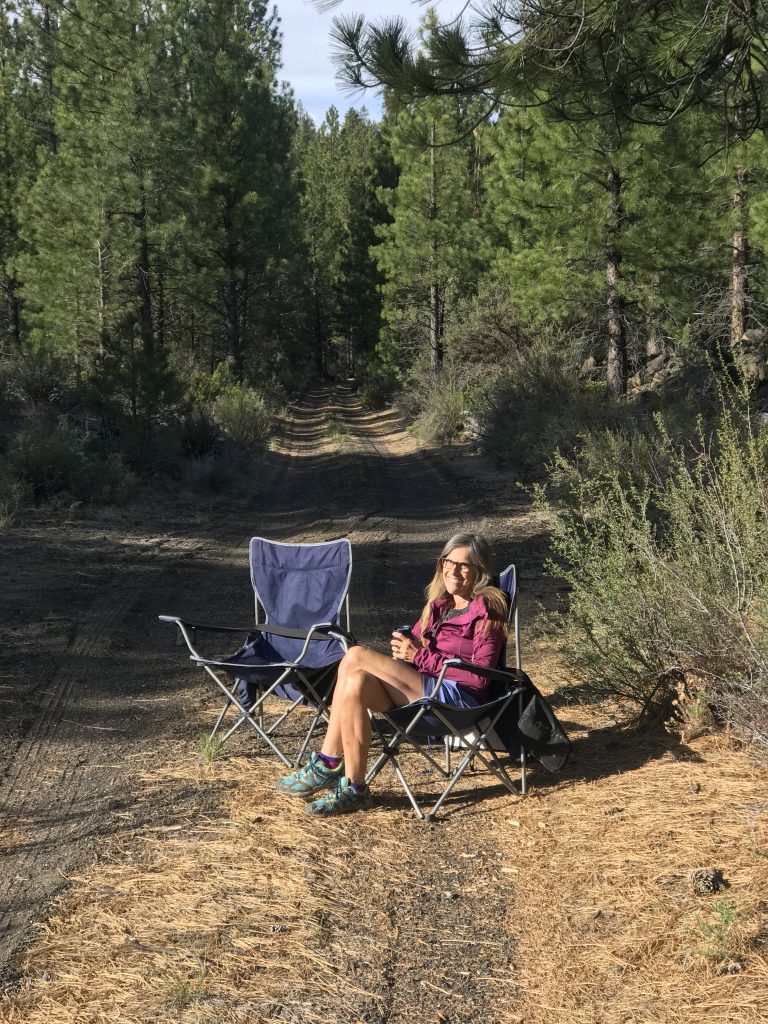 It was only a few minutes back down the road to the Lava Beds National Monument visitor center, so we headed there. The visitor’s center was technically closed due to Covid, but a ranger outside the building graciously found us a guide brochure. The Cave Loop Road where most of the lava caves are was closed to vehicles but she told us we could walk it and still go into most of the caves. She said that a few of the caves that were closed due to bats having babies (called pups, oddly), but we had no interest in going into caves with bats anyway. We’d thought we were going to have to miss the best part of the park and were elated that we could still see the caves the park was known for.

One thing that gave us pause before we started up the Cave Loop Road was a sign declaring a Plague warning (apparently some of the local squirrels had fleas that transmit the Plague). We decided to give the squirrels a wide berth since we didn’t want the double-whammy of Covid-19 and the Plague. 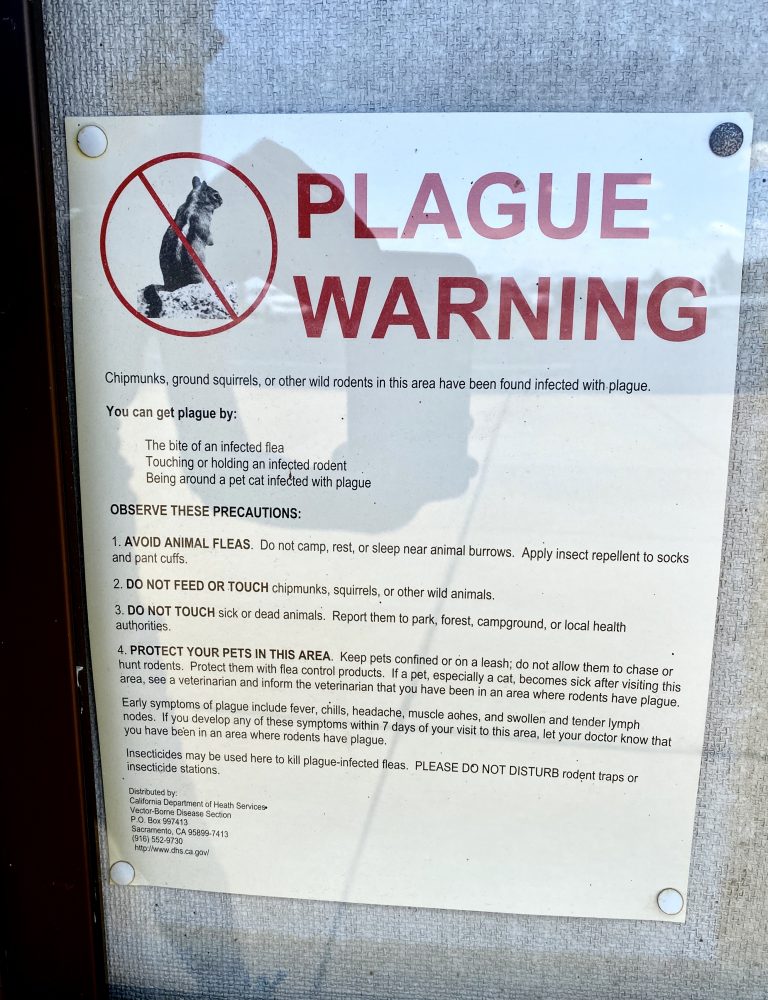 The Cave Road Loop began up a gentle hillside through an open desert landscape that was entirely of volcanic origin.

Shortly after we started around the loop, we found the first cave, The Labyrinth. There was narrow hole in the ground, a sign and a metal ladder going straight down into darkness. How could we not explore it? As I climbed down, I wondered if people who have a fear of heights would be afraid of going down a ladder as much as going up, especially since I couldn’t see the bottom. 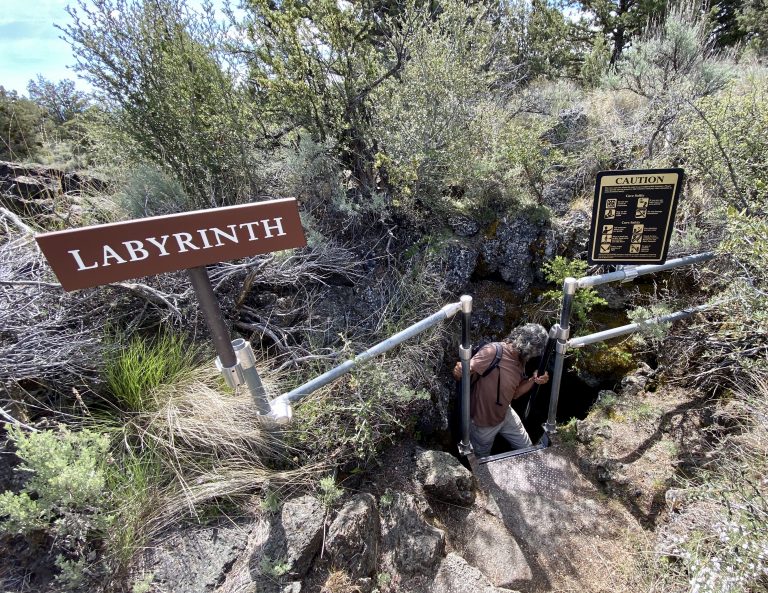 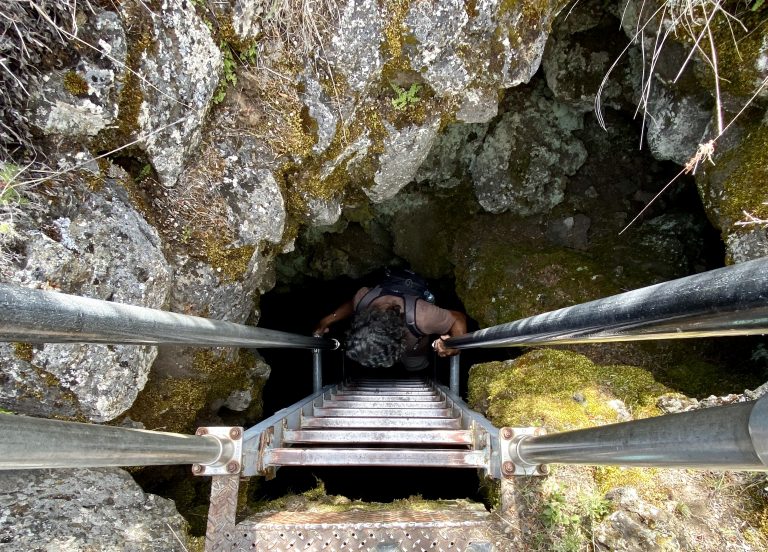 Halfway down the ladder as I was squeezing through a narrow area, my backpack hung up on a ledge and I was stuck until I squeeze myself closer to the ladder. Then, things changed dramatically. From the 80 degrees at the top, I felt a sudden coolness that grew until I was at the bottom – where it was 55 degrees. It was uncanny that just going down a few feet would make that much difference. The cave (and all the 800 others in the park) were actually lava tubes left over from lava eruptions from the giant Medicine Lake shield volcano, covering 770 square miles.

Susan joined me at the bottom, but the cave was too small for us to go into without knee pads and a helmet so we climbed back up and went to the next. 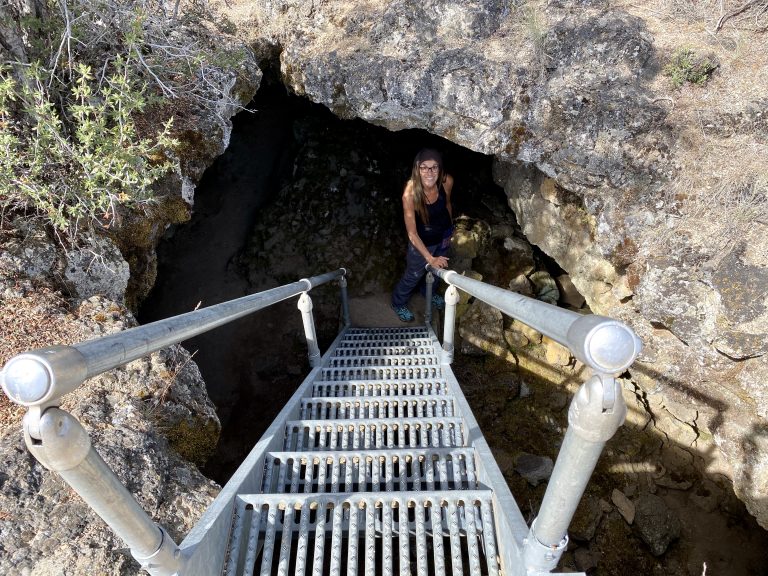 In all, there were 14 caves on the loop, each one more spectacular than the last and we entered all of them that were open. 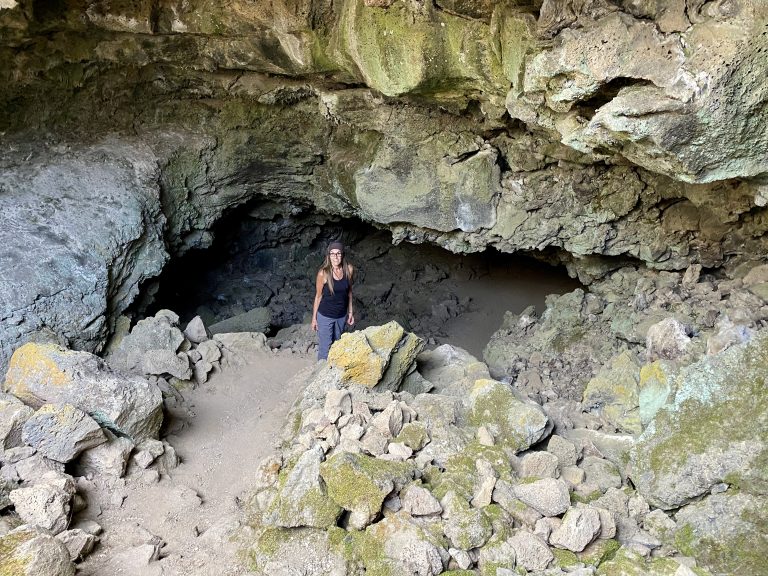 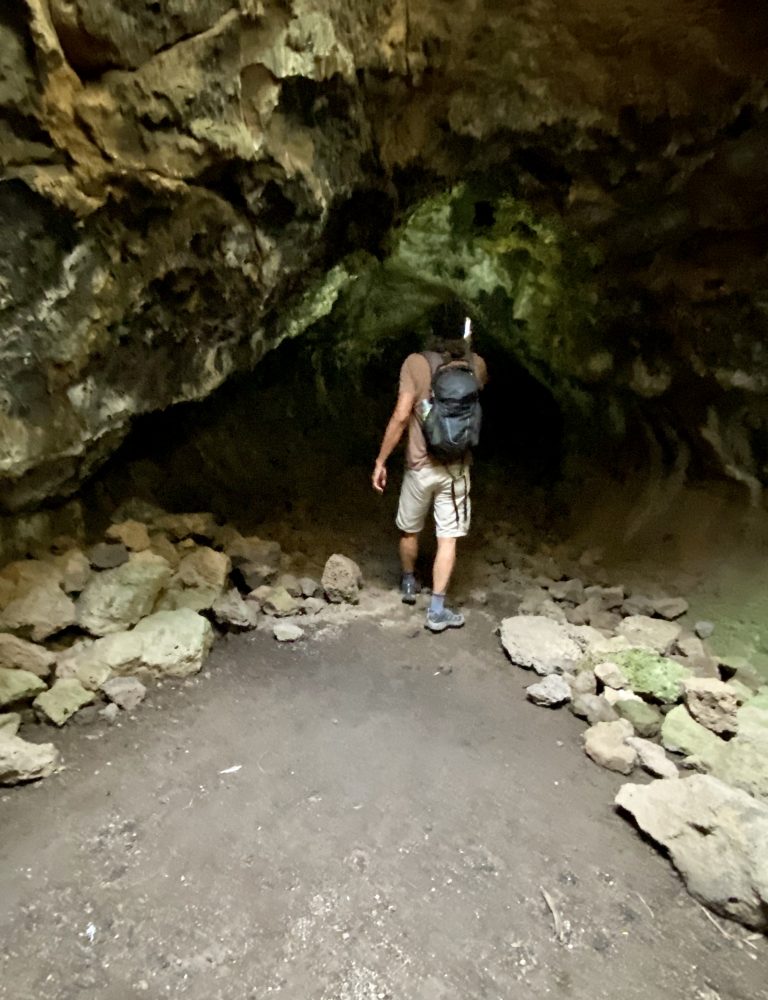 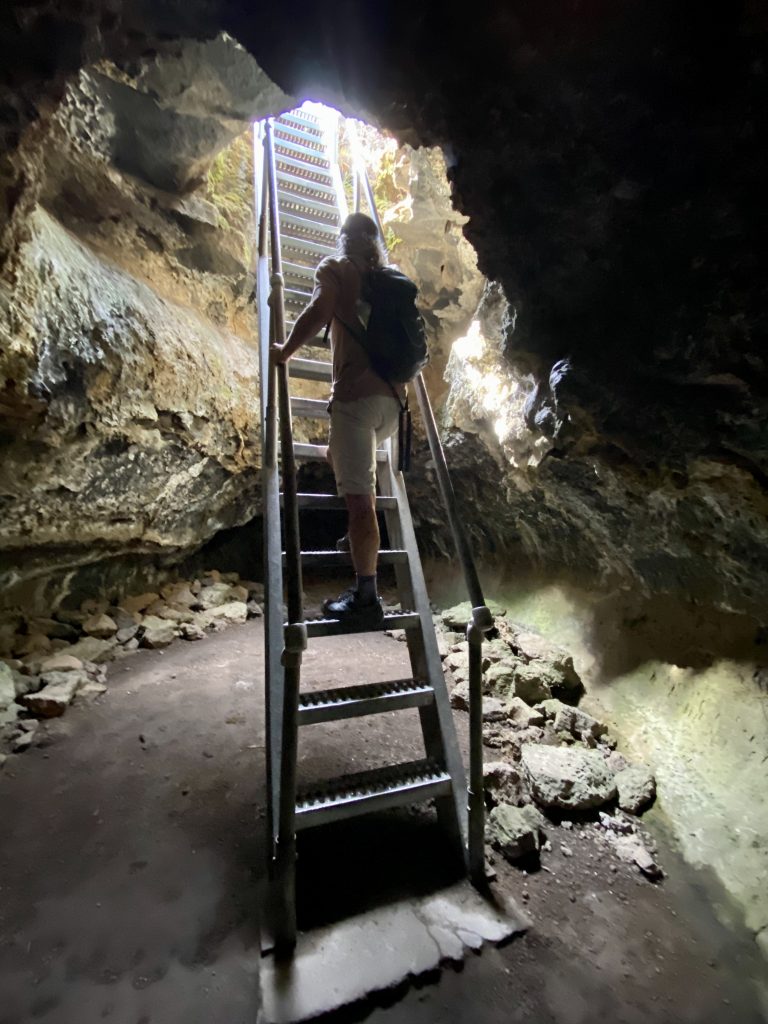 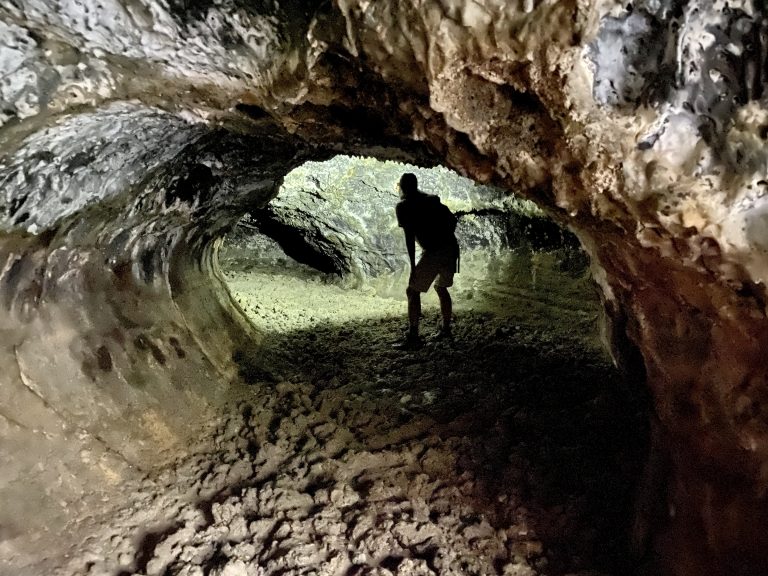 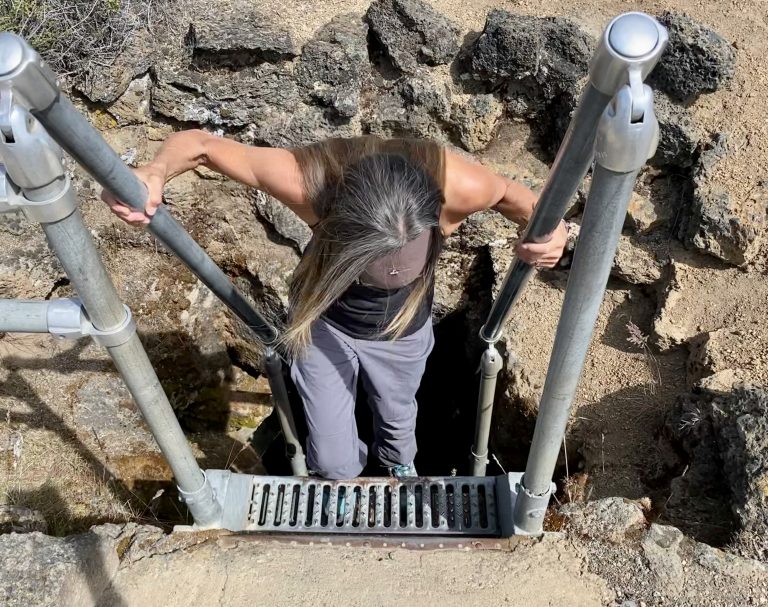 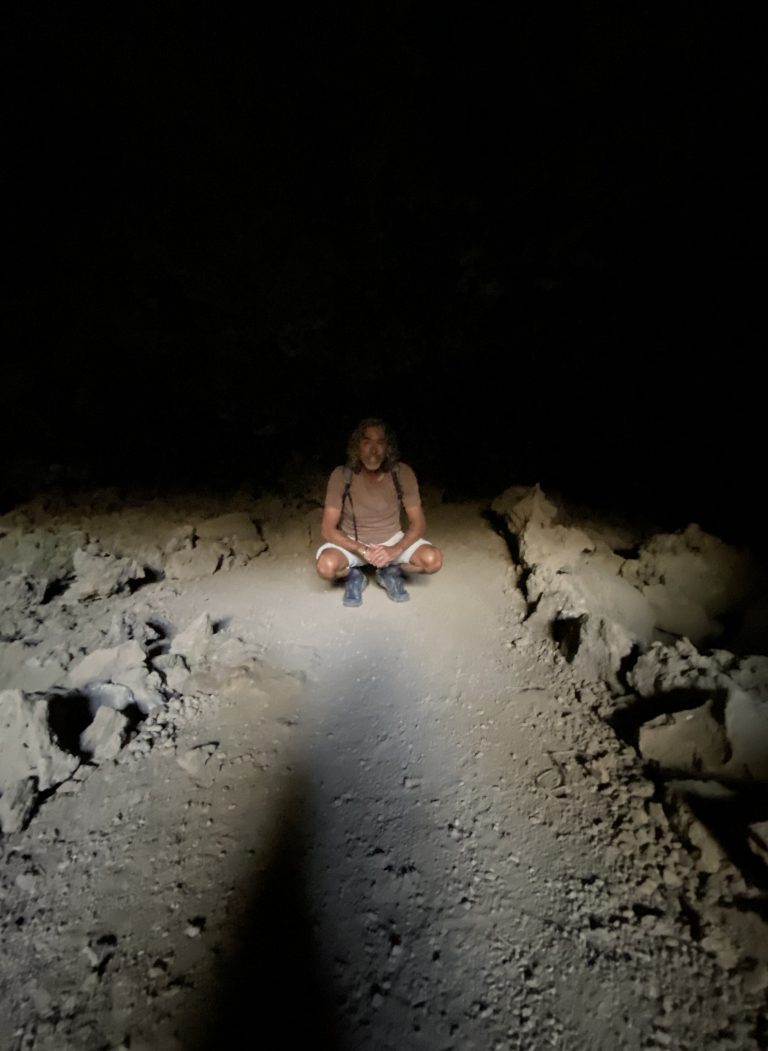 At each cave we marveled at the fact that the Park Service even let anyone into the caves. Nearly all had metal ladders or steep stairs leading to complete darkness and uneven footing. Some had paths leading down to other caves and some had low-hanging ceilings waiting to smack a head (we only did once). Most were completely dark only a few feet in. The park has many fewer visitors than most owing to its remoteness and because we were there the day after Memorial Day and during Covid, we had the park almost to ourselves. 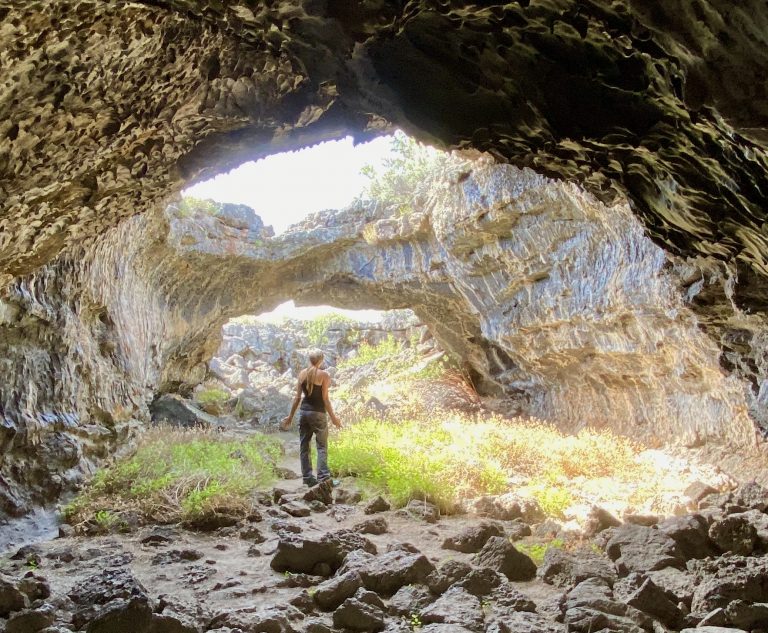 One cave was partly a collapsed lava tube and where some of it was exposed to sunlight a wildflower garden grew. It was nothing less than magical.

As we approached another cave, we noticed the volcanic rock formation looked like a frowning creature greeting (or warning) all those who dared to enter.

Heading into the cave, we climbed down another steep ladder, then took a stairway, then walked onto a catwalk into a cave that was easily twenty feet tall – and cold. 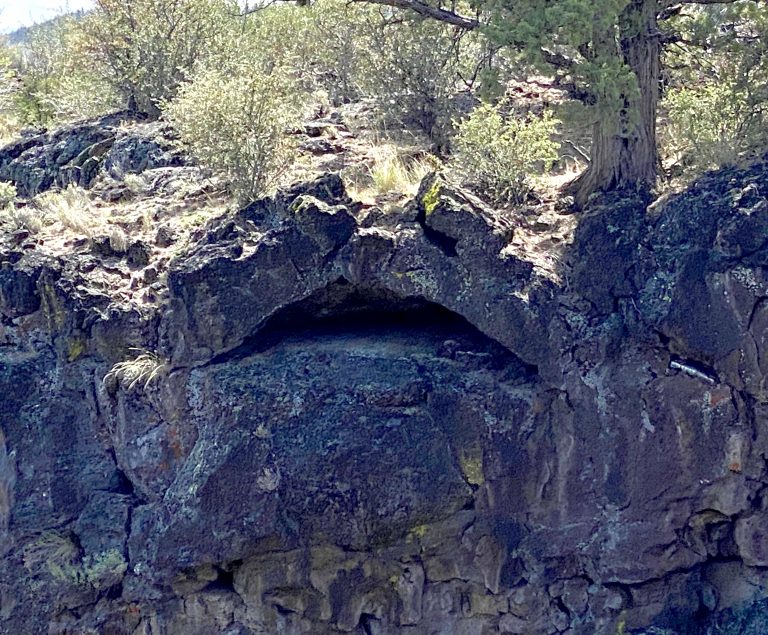 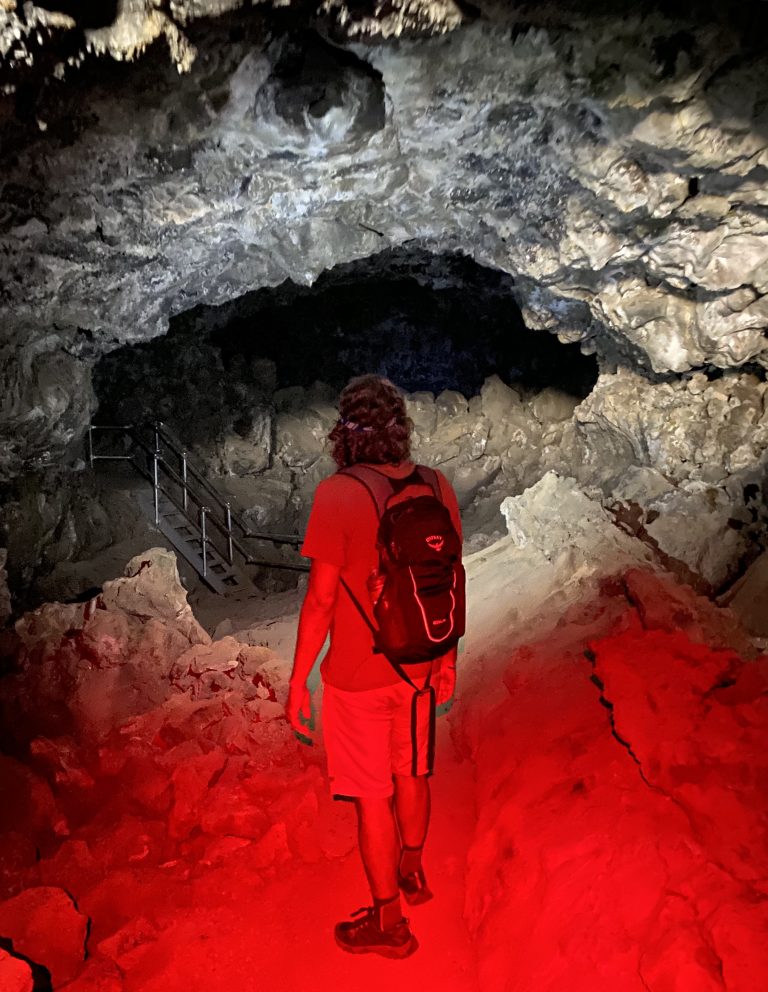 We both had headlamps on so we ventured farther until other caves intersected the main one and went off in other directions. We both grinned at each other as we could see our breath. 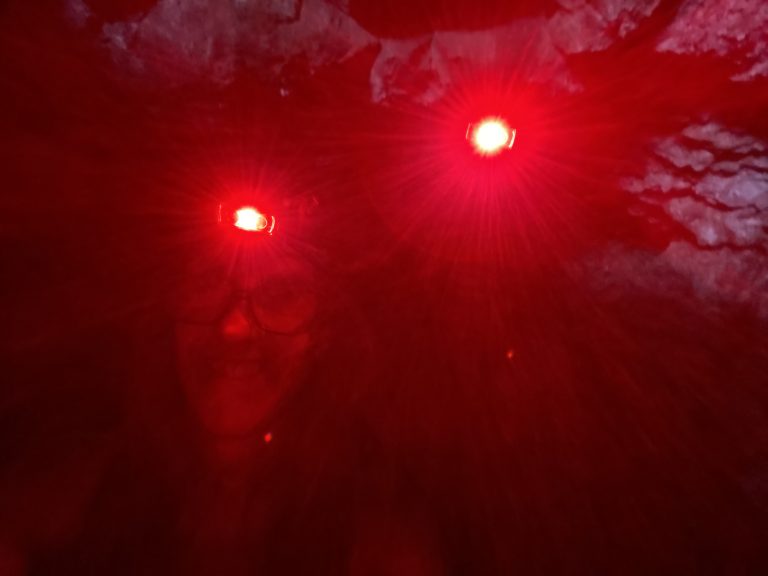 A couple hundred yards in, we turned off our headlamps and experienced total darkness. We couldn’t see a hand waved in front of our faces and without headlamps would have never found our way out. The floor of the cave was uneven and made up of areas with sharp rocks. A fall would likely have caused some painful injuries – and a tortuous climb back up. The bright sun blinded us each time we climbed out of a cave.

Another entrance lead to a 30-foot ladder down to a path into a twenty-foot high cave that lead to a catwalk and kept going farther and farther down, twisting and turning. Drips on the ceiling were slowly forming stalactites and some of the walls looked like something out of a science fiction movie. On the way out, a lone bat flew in, startling Susan. Its 18-inch wingspan made it look particularly large as it came in from the bright sunshine.

We chattered excitedly about what we’d seen as we had lunch under an enormous juniper tree near the visitor center and planned our next stops. Heading out of the park, we’d pass several more interesting areas.

Next on the list was one final lava tube – the Merrill Ice Cave. Once there, we descended a steep 30-foot ladder. Halfway down, I was astounded to feel ice crystals on the metal handholds and by the time I got to the bottom my hands were painful from the cold steel. From there, a path led to a catwalk that overlooked a small pool of ice. A century ago, there was so much ice that tourists used to ice skate on it. A sign said that due to climate change, much of the ice had melted and it might not be much longer until it was gone. Inside the cave though, it was like being in a freezer and neither of us could stay much longer without a heavy jacket on so we climbed up into the 80-degree sunshine. 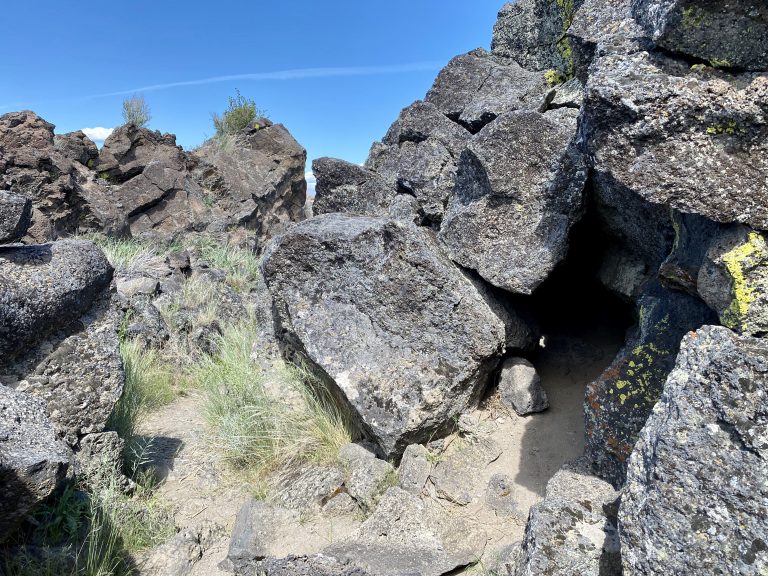 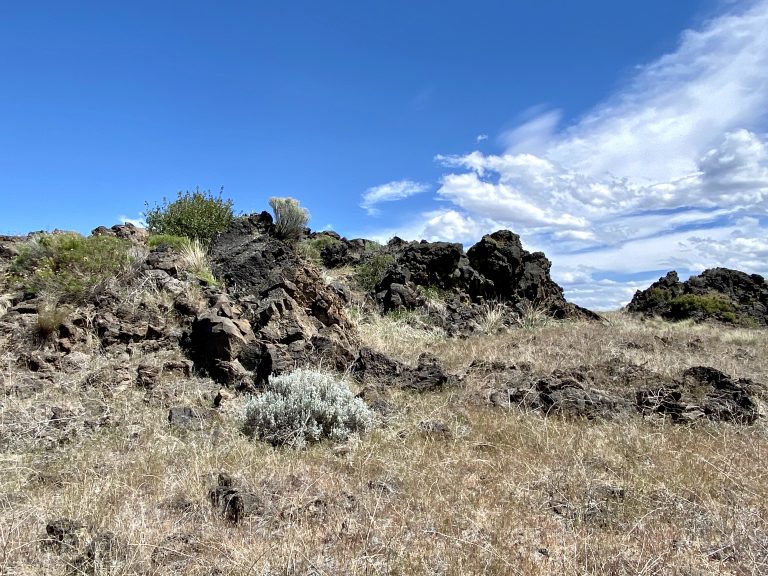 The next stop a few miles away was poignant in a different way. A mile or so loop trail with signs around a very rocky old lava flow illustrated how a few dozen Modoc Indians in 1873 repelled 600 U.S. Army soldiers for five months as they used lava tubes, caves, trenches and rocky natural fences to defend an almost impregnable area. They would have lasted much longer had the Army not cut off their water supply from a lake that lapped at the shores of the area (since then, much of the lake has been drained for nearby agriculture and the shoreline when we were there was nearly a mile farther away). The Modoc Indians had been sent to the Oregon Klamath Reservation in 1869, but because it was occupied by their traditional rivals (the Klamath Indians), they eventually made their way back to their homeland where they were eventually defeated. Captain Jack, the Modoc chief, was the only native American leader ever charged with war crimes and was executed by the Army. 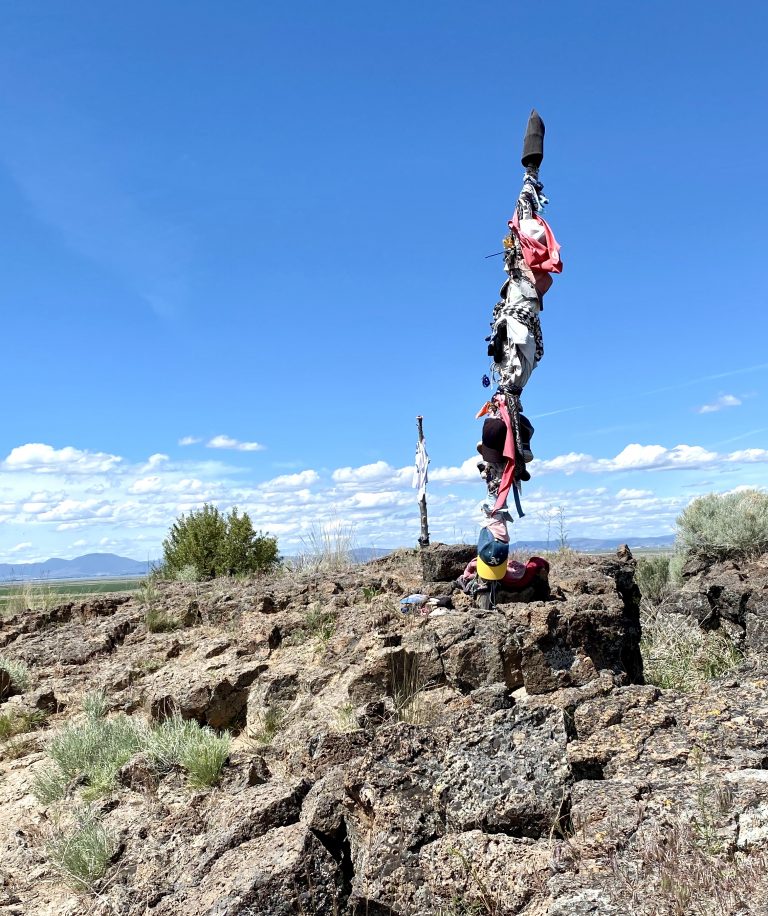 A tall wooden stick at the last marker on the trail was covered in colorful hats, shirts and trinkets, no doubt a totem left by descendants of some surviving Modocs who were forced back onto the reservation in Oregon after their final defeat. 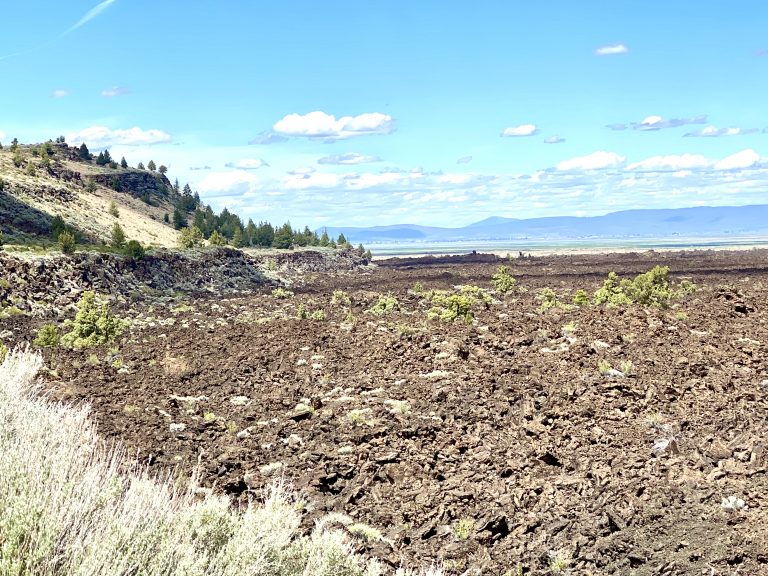 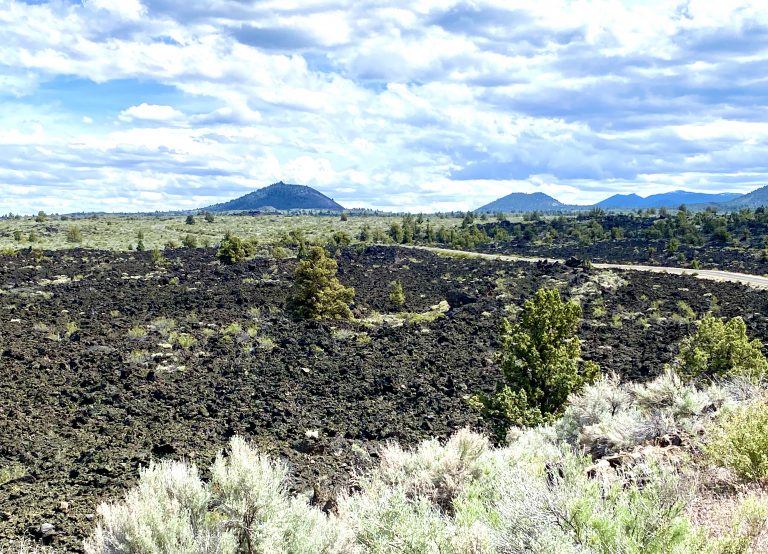 After that sobering sight, we passed massive fields of lava flows as we headed out of the park. 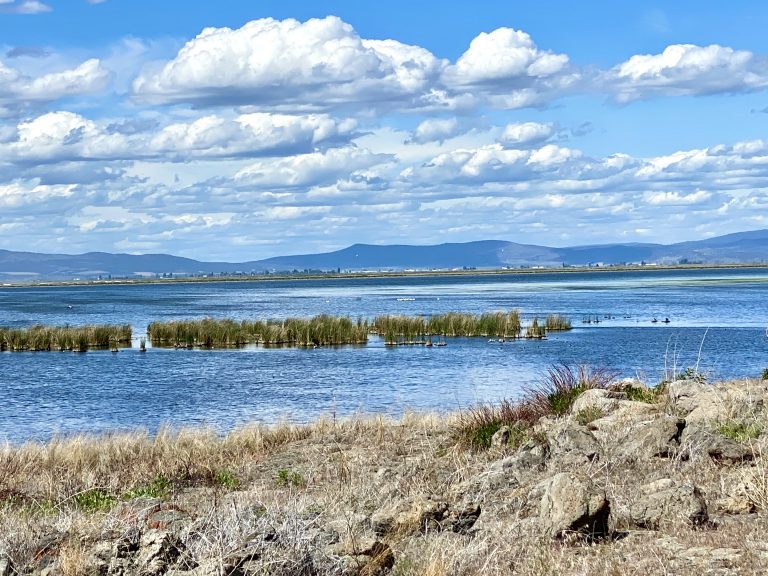 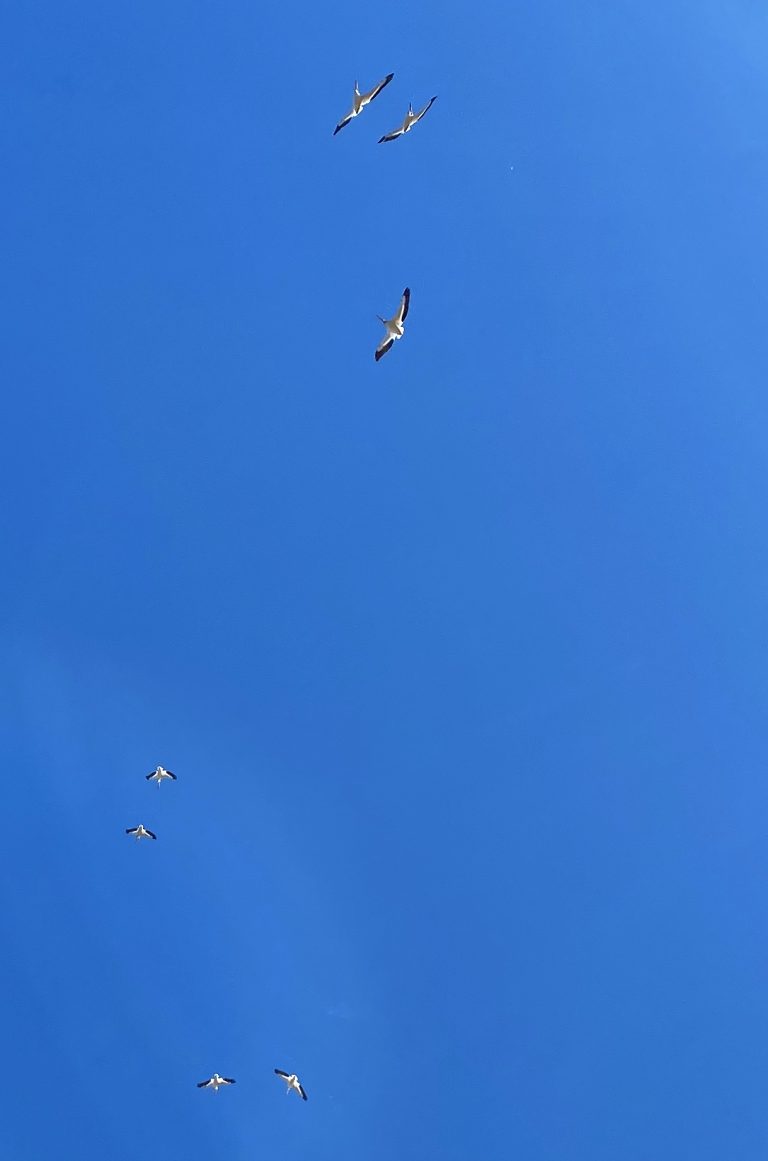 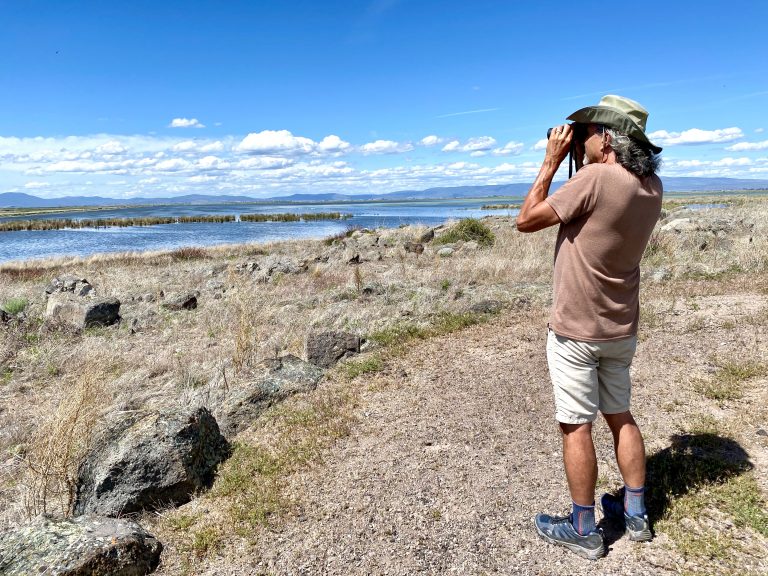 We then turned a bend and went along a National Wildlife Refuge, where we saw dozens of species of wildfowl, including white pelicans, ruddy ducks, tundra geese and mergansers.

From there, we turned north toward nearby Oregon and passed through some small towns, including Bonanza, where we were hoping to get gas, but the only station in town was closed. Many of these struggling small towns flew State of Jefferson flags (a new “free” state hoped for by many in Northern California and Southern Oregon) as well as Trump signs. It seemed like if that was where they were hanging their hope, they were lost, as many buildings looked like they’d been abandoned for the last few years.

We finally found gas down the highway and while at the station, I couldn’t help watch the attendant. He did a masterful job cleaning zillions of bugs off the windshield and was super friendly and upbeat. But around his neck was a large, jagged red scar that looked as if he’d been hanged. Other scars on his face and arms told a story of troubles and he walked with a limp. I wondered how someone who’d experienced such horrors could be such a friendly person. 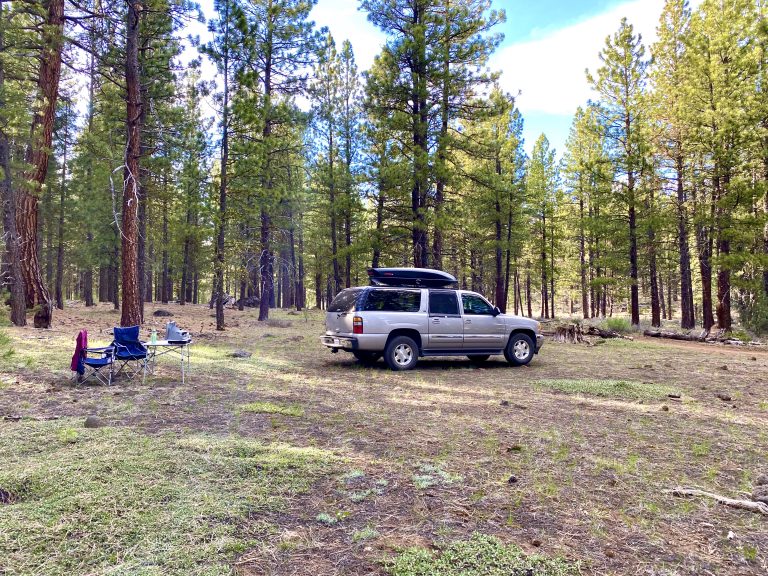 As we drove farther north, we came to more national forest and eventually pulled off onto a forest service road, then turned down another, looking for a place to camp for the night. We eventually found a beautiful clearing in the trees, the ground littered with centuries of falling pine needles. 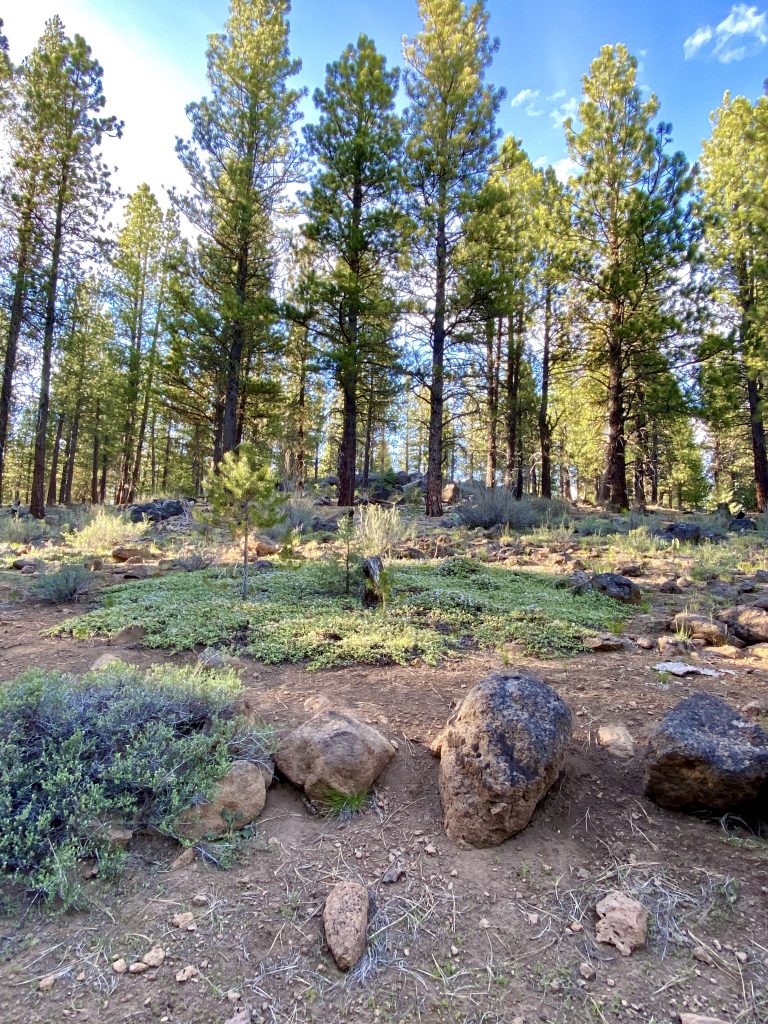 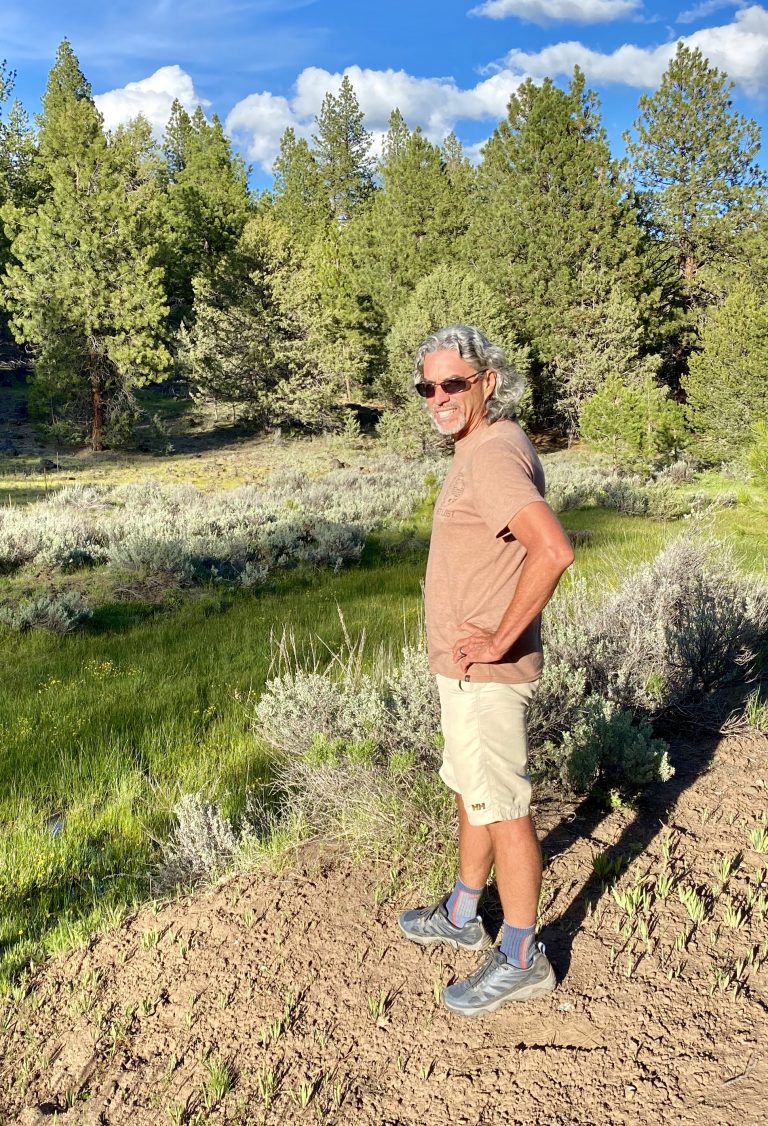 We made dinner and then took a walk along the road to a small meadow covered in yellow wildflowers cut through by a small babbling brook.

After a quick sponge bath before the mosquitos came out, we retired to the truck to sleep. There was no sound except for a gentle wind high up in the trees.

PrevPreviousPost # 33: Through Susanville to the Modoc
NextPost #35: Where the antelope playNext