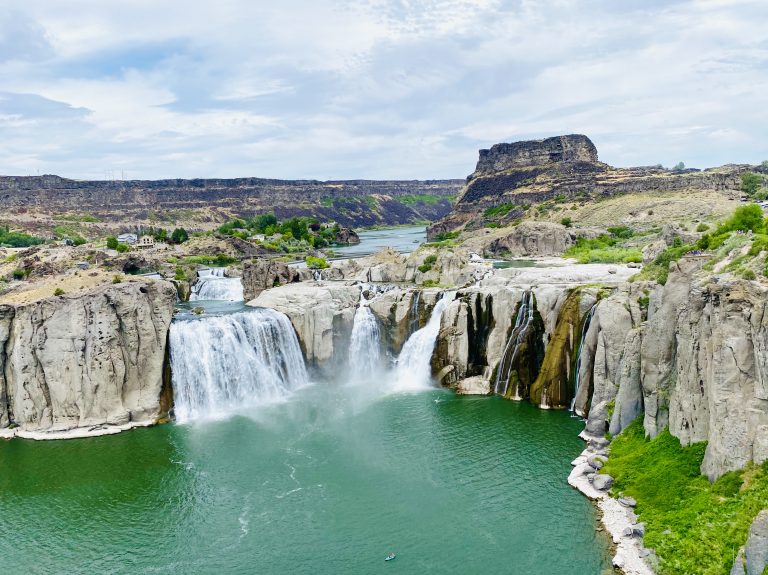 We showered one more time in the morning to get our money’s worth at the hotel and set off to Twin Falls, Idaho where we wanted to see Shoshone Falls, taller than Niagra and said to be as beautiful. Once off the highway, a convoluted and annoying path through farmland and the outskirts of town led us down several roads until we reached the entrance. We could tell it was the entrance by the dozens of cars barely moving. Idling in the hot sun, we finally were able to pay our $5. I couldn’t imagine a much better Covid spreader than a man taking a twenty-dollar bill from someone and handing them back three fives from one or more people who’d just handed him their money. I used hand sanitizer immediately afterwards.

Following the winding road down, it was clear the parking situation was a clusterf*ck. There were way more people streaming in than leaving and we circled for a while until we tried to park with the RVs (technically we are one since we sleep inside) but we were shooed away by a harried and rude park employee who told us to just keep looking (Where? I don’t know, up there!).

We finally found a semi-legal spot, parallel parked on the side of a gravel road, and walked to the overlook as dozens more frustrated drivers were getting increasingly annoyed.

The falls were stunning even though the water was low (but even at high water, I was pretty sure Niagara Falls has little to worry about). The wide Snake River meanders along minding it own business when it suddenly falls a couple hundred feet, thundering onto the rocks below. We went to the first obvious overlook and watched the falls from behind the crowds.

We quickly decided to hike some of the trails we’d heard about to get a better and more private view. Unfortunately, the City of Twin Falls had neglected to erect decent signs directing hikers to several paths. We finally found one that instead of going along the rim above the river as promised, simply kept climbing up and away from the river. 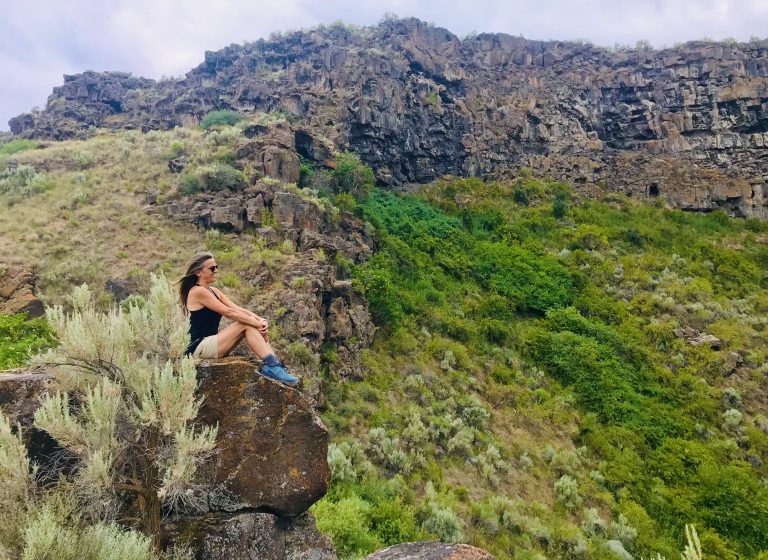 We scrambled out onto some cliffs and discovered a secluded sandy overlook to view the falls without the crowds. It was hot and it wasn’t long before we were ready to leave. 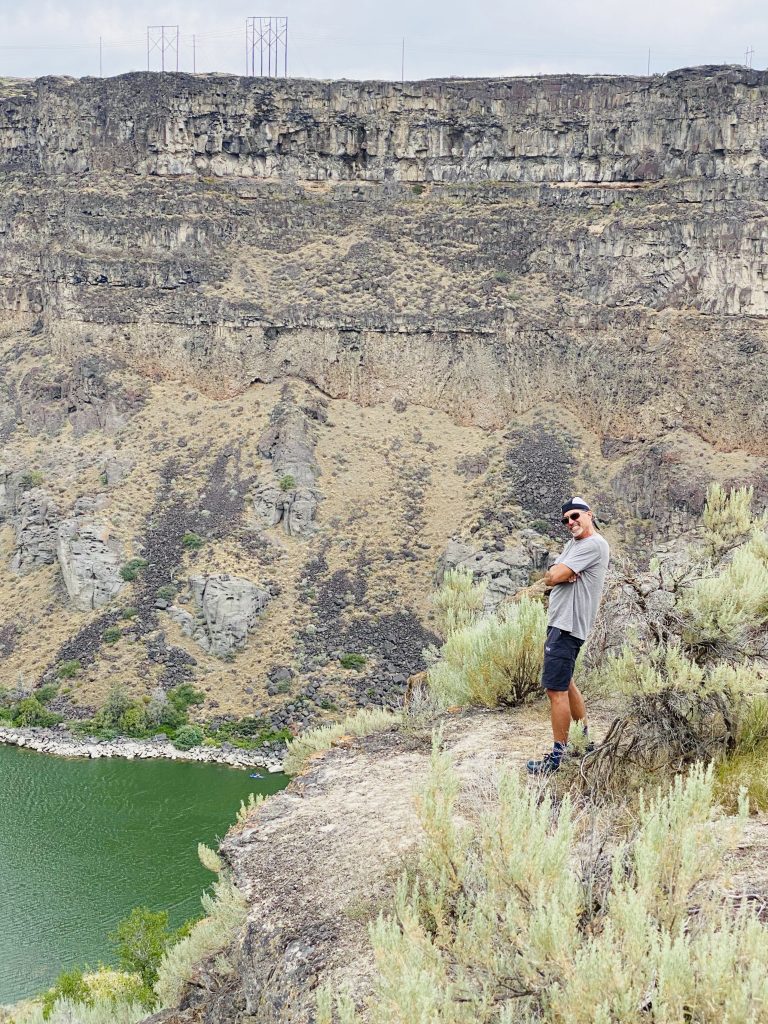 We decided that although Shoshone Falls was certainly beautiful, as an attraction it got one star, mostly for the failed city planning. We left Twin Falls somewhat disappointed, but we had much to look forward to.

We got on the interstate and headed southeast to Utah. About three hours later we passed through Salt Lake City, which has a stunning mountain backdrop. There was surprisingly little traffic, which was probably why everyone drives 85+ mph through the area.

From Salt Lake City, we turned east and headed for the Uintas-Wasach National Forest to find a place to stay for a night or two. After driving on a twisting road through a canyon and past beautiful Park City and the ski areas, we turned onto a road that led into the national forest.

We followed a sign leading to a few forest service campgrounds along a pretty river just off the main road  and quickly saw they were full. We then checked a few areas mentioned on the iOverlander app for dispersed camping. Again, every spot was taken. It was Saturday night, so, okay. Next, we drove up a very rocky, steep dirt road. We felt certain it was too rough for most vehicles but were surprised by the tenacity of the campers, especially those without four wheel drive. Even two miles up the difficult road, every conceivable spot not only was occupied but often there were numerous tents, vans, and even RVs crammed in at each location. We turned around and bounced slowly down the road, suddenly worried about finding a place to sleep. We tried a couple other roads with the same result.

We were dumbfounded that for miles at every turn-off cars lined the road and every conceivable place that someone could put a trailer, tent, RV, or van on was taken. It seemed that camping in the Uintas mountains was a local “thing” for people from the Salt Lake City metropolitan area. Some of the spots were marked with hand drawn signs or flags to identify which family or group was there. Undoubtedly people were glad for the easing of stay-at-home rules, it was a beautiful Saturday night, and most people appeared to be there at least for the weekend, if not much longer. We speculated that some might even commute from their campsites to Salt Lake City or Provo for work. Although we were taken by surprise at the throngs of campers (we’ve never seen anything like it) we were pleased to see that there was little evidence of garbage or mistreatment of the forest, and impressed that Salt Lake City was an area filled with so many people who found solace in nature.

Finally, we decided we’d simply head farther up the highway that wound uphill for dozens more miles. It was getting dark and we worried we’d have to drive for a couple of hours and find a rest area somewhere. Just at that point, Susan spotted a dirt road that was hard to see and required a very sharp turn off to the right.

I turned around, certain it would be full of campers, but a half-mile in we found a wide spot to park just off the rough dirt road where we could make camp. It was getting chilly but after a quick dinner of the remaining halves of subs in our cooler, we took a walk up the road to shake off the edginess. Not surprisingly, a few hundred yards up, we saw more campers. We were lucky to even have the pullout. It wasn’t far from the main road with a little traffic noise, but it was the only place we could find and the boulder-strewn area was really quite pretty as the setting sun and then the full moon lit the nearby hill. We crawled into bed and easily fell asleep.

PrevPreviousPost #41: Oregon from west to east
NextPost #43: The land of dinosaursNext