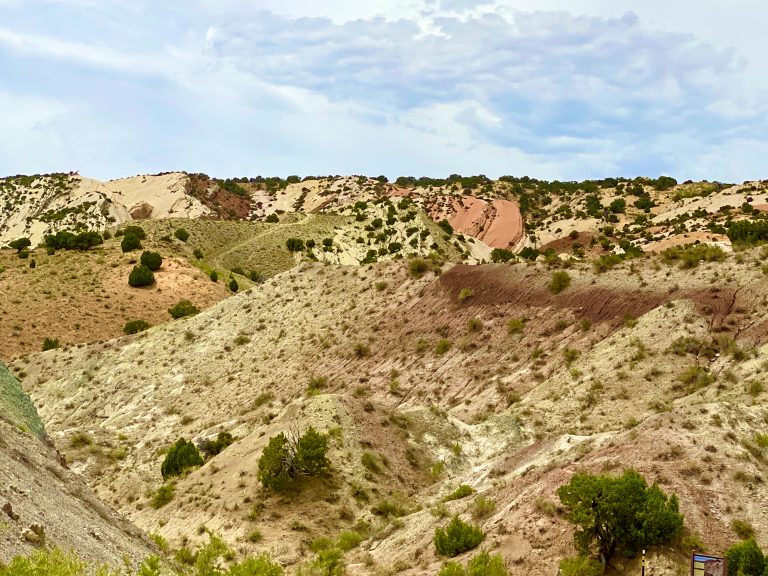 We’d never made camp the night before and it was quite chilly camped at high elevation, so we left right after we woke up. The craziness of the crowded national forest continued as we drove even higher up the road. Every single potential camping spot was full. Literally thousands of people were camping along 50 miles of the road. We had been lucky to find a spot at all. It looked like many people were staying for days or weeks and had set up screened rooms, play areas, and signs telling others where they were.

As we climbed the pass at 10,700 feet, there was still some snow (along with campers). We were above the tree line and the granite outcroppings jutted up into the sky splitting the gusty wind. On the other side of the pass, there were more campers but maybe a couple of open sites until the national forest finally ended.

We were not hurried on our trip so we made a point to pull off at overlooks and potentially interesting historical markers. As we dropped somewhat in elevation after the pass, we crossed into Wyoming and came upon a marker. We’d come across other markers during our travels, like wagon train stops along the Oregon Trail, and we were curious to learn whatever random piece of Wyoming history might be revealed.

The marker informed us that the field once was the site of an extraordinarily rowdy boomtown that was renown for its many saloons, gambling parlors, and its red light district. As the marker revealed, Bear River City emerged during construction of the Union Pacific Transcontinental Railroad. The town once had a population of about 2,000 people but everyone packed up and went elsewhere when the railroad changed its plans and decided not to extend track there. Now there was nothing but an empty field, sagebrush, a hillside, and the Bear River.

About 15 more miles down the road, we arrived at Evanston, Wyoming (elevation: 6,500) and stopped for coffee and gas. Breakfast would be granola bars, which was fine because the first half of the day would be spent sitting in the truck. Turning east onto I-80, we hurtled along at the 80-mph speed limit, occasionally—and incredibly—passed by semis. With a strong tailwind, we made our all-time best tank average of 19 mpg, and gas was around $2 a gallon, making this trip a bargain.

We left the interstate for several smaller roads, climbing ridges and dipping into canyons, eventually finding our way to northern Utah along the edge of the well-named and stunning Flaming Gorge National Recreation Area. We stopped a few times to admire the views, but our goal was another hour away at Dinosaur National Monument. We’d be coming back through Flaming Gorge afterwards.

As we approached Dinosaur, we rocked out to Walk the Dinosaur by Was (Was Not) on Spotify, grinning like kids. We finally made it to the park, entering for free with our senior pass. We were immediately impressed by the “painted” rocks and cliffs as we came into the park.

We were concerned about getting a place to camp after last night’s fiasco so we hurried to Green River Campground only to find it less than half full. We scored a site near the Green River under an old cottonwood tree. The campsite had a short path to the river, which was flowing fast along banks of more cottonwoods and river willows.

Dinosaur has the one of the world’s largest deposit of Jurassic remains ever discovered and many are on exhibit at the park’s exhibit hall. Unfortunately, the visitor’s center and exhibit hall were closed due to Covid, but the park brochure informed us we could see dinosaur bones along Dinosaur Interpretive Trail. So, after we set up camp, we drove back to near the park’s entrance to the trail.

It was hot and there was no shade along the trail, but we found a giant dinosaur vertebrae jutting out of a hillside as well as hundreds of fossilized clams. Seeing the vertebrae in situ may have been even better than viewing whatever the closed exhibit hall contained.

We also saw petroglyphs, including one of a mountain goat, which seemed especially fitting since we’d just seen three live ones on the hillside on our way to the park.

We took an obvious (but apparently closed) side route that we hoped would loop back to the parking area. It did, and the park ranger we saw along the way didn’t seem to care that we had taken it. Along this route we found ourselves near the paleontological quarry.

There was a small hillside adjacent to the quarry with an old stone structure at the top. Of course, we had to climb up the somewhat crumbling stone stairs to explore. We were uncertain, but figured the locked structure may have provided access to the quarry for the paleontologists who excavated the fossils.

We then drove to Josie’s Cabin, which was located several miles away in a box canyon in the park. Beginning in 1913, Josie homesteaded solo in the shady cottonwoods for 50 years, carving out a living raising chickens and horses that were cleverly penned in by the box canyon. Josie was apparently quite a character—a strong-willed western pioneer who had divorced four men during an era when divorce was nearly unheard of. During the Prohibition, she brewed wine and apricot brandy.

The cabin was still standing and we walked through it and the grounds marveling at the ability of one person to construct the buildings and fences, clear the brush for a garden, enclose a pond, and eke out a living in this beautiful part of Utah. And Josie did it all alone as frontier women often had to. Another visitor there, an older man, commented wistfully about how great it would be to live off the land like Josie had. With the social and political climate as low as I’d ever seen, I agreed. No news, no internet, no political bickering, no social distancing, just living.

Back at camp, the wind had picked up just when we decided the river looked inviting for a bath. During a lull, we donned swimsuits and water shoes and bathed in the swift, chilly current and felt wonderful as we dried in the sun along the bank.

As the sun started its descent and cast lavender-colored hues, we took a walk around the campground. It had filled some but still had plenty of free spots. I spotted a snake along the road. The snake was either a nonvenomous gopher snake or a rattlesnake—both are common in the area. They look similar except only the rattler has black and white banding on its tail—as well as rattles, especially a large one like this.

The wind was forecast to increase and it did. By dinnertime, it was blowing so hard we could hardly heat up soup. We went to bed with a bit of sand in our noses but enjoyed the sound of the wind. It was warm enough inside the truck to need the 12v fan. Quite a change from our previous night at 9,500 feet.