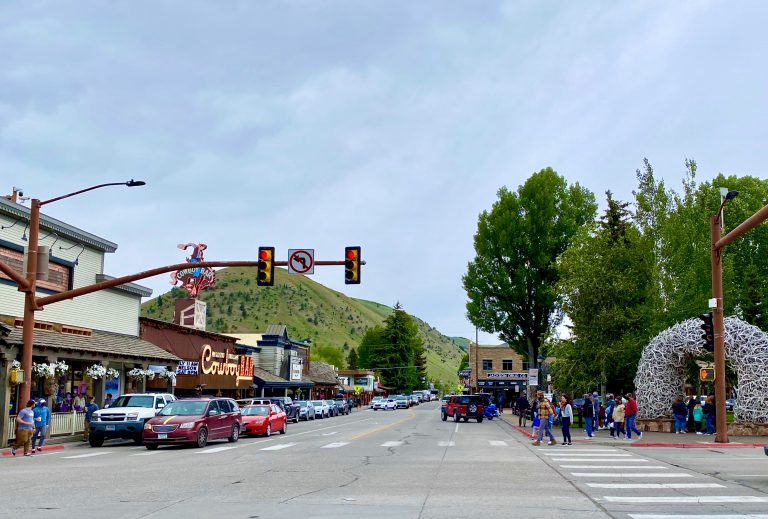 The cheap hotel the night before turned out to be just what we needed. By the time we checked out, we were clean, warm and rested. And our cooler was full of cold food and frozen ice packs, courtesy of the room fridge. We’d spent much of the morning catching up on emails and some work thanks to the wifi. We hit a grocery store on the way out of town and got a few groceries, filled the gas tank (the $2 stuff was 85 octane, which is less than most vehicles need for climbing the steep grades, so we splurged for Rocky and got 87) and hit the road north. Even though Rock Springs, Wyoming was at an elevation of 6,300 feet, we climbed the long highway out of town for another thousand feet. This part of Wyoming is on a high plateau, all the way through the Grand Tetons to Yellowstone.

The predicted strong southwest wind blew us around and I was glad we had three tons of truck to keep us on the road. After a few hours, we pulled into Jackson Hole and Jackson, Wyoming. We learned that Jackson is the name of the small town at the southern end of the valley, whereas Jackson Hole is the name of the entire high valley by the Teton Mountain Range—“hole” was a term early trappers used for the large mountain valley.

We wandered around the ski/ourdoorsy/cutesy/Western town and stopped for a turkey burger at an indoor/outdoor table where we could watch the passersby. The early dinner saved us from having to cook dinner wherever we would end up in the National Forest in the evening.

Despite the tourist vibe, we liked the town’s feel, with some of the downtown sidewalks made of boards, a pretty park in the center, and lots of boutiques and art galleries—though many were closed due to Covid. Oddly enough, it was the town with the highest percentage of people wearing face masks we’d ever seen. All stores required them and most people, including many walking around outside, were wearing them.

It was a chilly afternoon and light rain appeared just as we returned to our vehicle. Leaving town, we had no idea if we’d find a place to camp. Twenty or so miles out of town there were some forest service roads that allowed dispersed camping but only within a very limited area, unusual for a national forest.

We turned up a dirt road and were dismayed to see dozens of campers of all types in the first dispersed area. The last thing we wanted was driving for hours trying to find a place like we did in the Uintas Mountains in Utah. We went up a couple of rough roads that all ended with people camping in any empty spot. Really? Again? We went up another road and Susan spotted a fire ring (required to be able to camp) a hundred yards off the road. I drove towards it and realized why no one else had taken it.

To get to the spot meant going down a rutted muddy hill, then back up another. I eyed it, put Rocky in 4wd and headed down at a good clip, hoping momentum would keep us from getting stuck. It worked and we found a level spot with wildflowers and quaking aspen all around.

There was some mud as we stepped out of the truck from the earlier light rain, but all we needed was a place to sleep and we were glad to have found it. We explored down a hill a few feet from the campsite and discovered a small clear stream.

We walked up the road we’d turned off of to take a stroll. Coming down the road was a Sprinter camper van wallowing in the muddy road. The young couple stopped and told us they’d been all the way up the road and couldn’t find a campsite. The woman was in tears because they’d nearly gotten stuck and she said they had no idea where they would be camping. We told them we had been lucky to find a place and described the turnoff. When we returned to our campsite, we were surprised to see they had pulled off near where we were and found another fire ring we’d hadn’t noticed nearby. We chatted with them for a little while and learned they were doing a reverse version of our trip–they’d just been to Yellowstone and the Grand Tetons and were heading toward Salt Lake City and then Oregon next. The woman had cheered up and was obviously relieved that they had found a place to stay for the night. We gave them a bit of travel advice and wished them luck in their travels.

Before turning in for the night, we watched the sunset and then the moonrise in the purple sky over the nearby hills.

I got the extra blanket down from the rooftop carrier and we fell asleep to wind in the pines as the temperature fell. 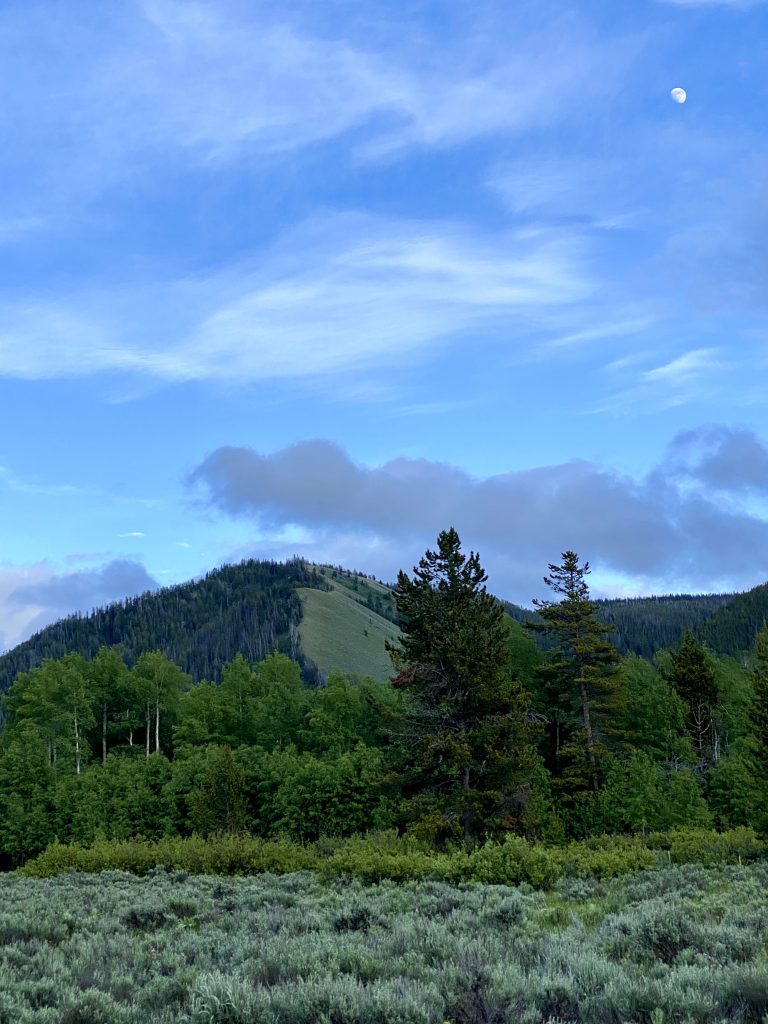