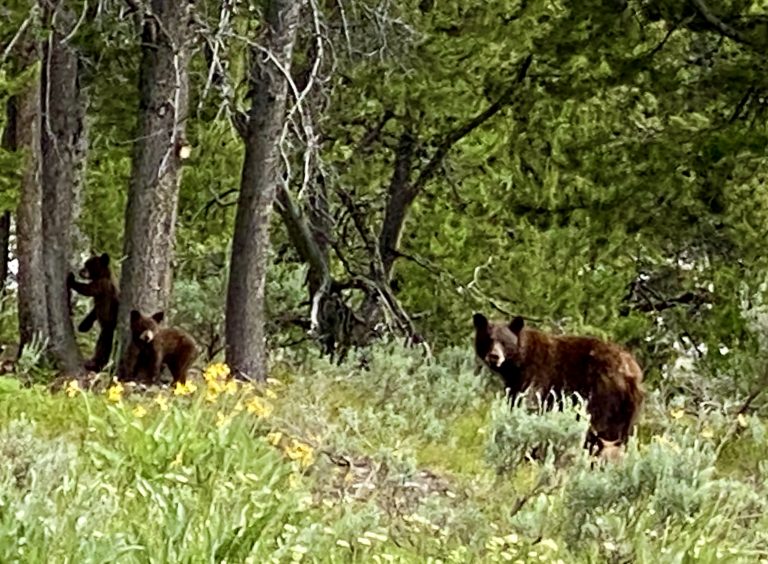 It was cool last night, around 45 degrees, which made for good sleeping. We lingered until the sun came through the windows and warmed us. During breakfast, we discussed whether we were up for a strenuous eight-mile hike with 2,500 feet of elevation gain that would take us deep into the Tetons. We looked at our map and discussed several options for a few minutes. One hike we found in a guide book was called Death Canyon. Susan knew I wanted a canyon hike and said, “Well, Death is an option,” which were not words I thought I’d ever hear her say.

We were still a little worn out from the last two days and we also felt like we needed a day with fewer people on the trails and maybe a place to plant ourselves for an hour or two and relax. The canyon trails all were rated as difficult and only two were open (the others were still blanketed with snow) so they were bound to be crowded since it was July 4th. Finally, we settled on a non-canyon hike—the oddly-named Two Ocean Lake trail. The road to the lake was called Pacific and I suspected there was an Atlantic Road somewhere nearby. Perhaps some sailors/explorers had been homesick for the sea.

The lake itself was only a couple of miles long and no lighthouses or crashing surf were to be found. But we did find the solitude we were looking for. We saw very few hikers, I guessed because it was a bit out of the way and not among the more well-known areas.

When we first got to the trailhead parking lot I found another reason for the lack of crowds—fearless hungry mosquitoes were everywhere. We sprayed ourselves with some 30% DEET, which seemed to work but not before donating some blood to the natives. We brought along some snacks—and our bear spray, as we always did.

The hike was about 7 miles around the lake and while it wasn’t spectacular in a Grand Teton kind of way, their peaks appeared in the distance. It was lovely. 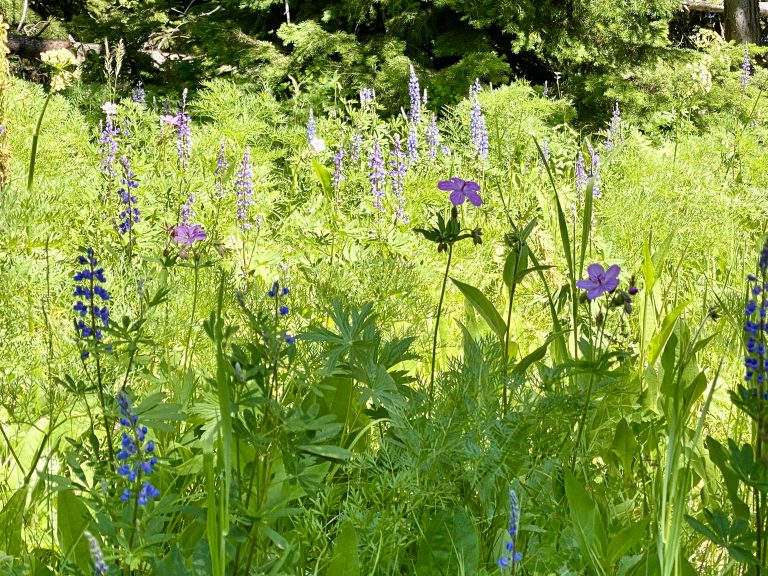 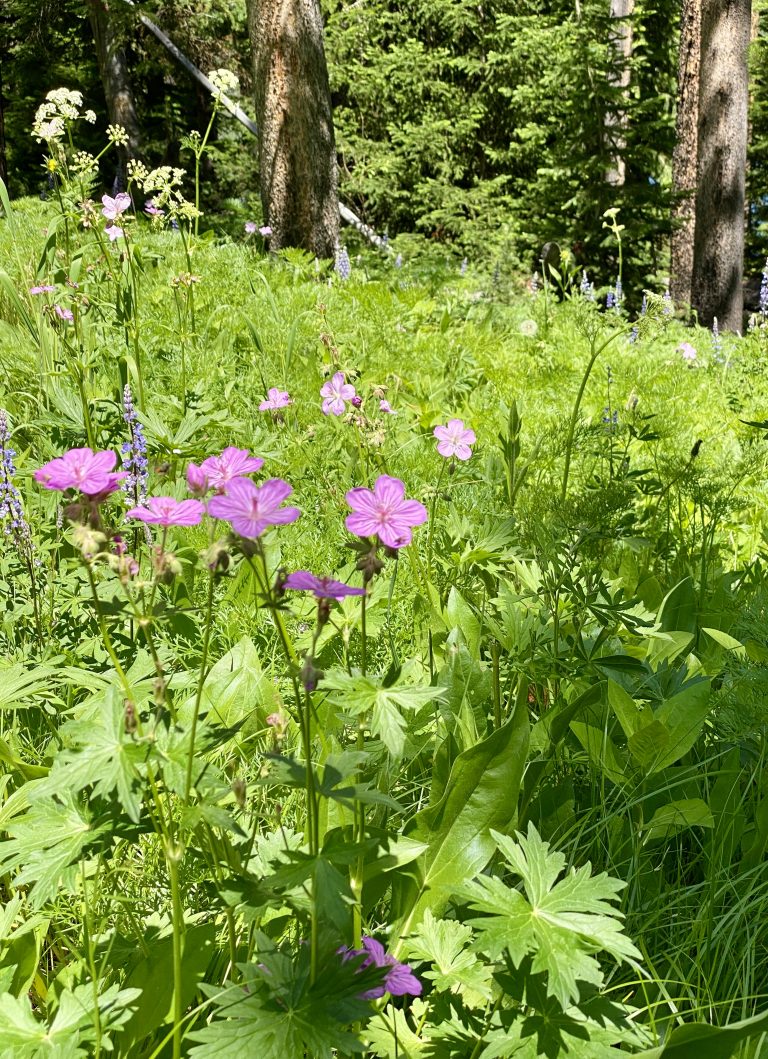 The slightest breeze causes the leaves on an aspen tree to flutter gently and the whole tree then looks like it’s quaking in the wind.

The mosquitoes were left behind and we had 70-degree sunshine in the most wild area we’d seen in the park so far. I expected moose, bear and wolves at any time, though they apparently were asleep during the afternoon. A few hikers we met going the other direction asked us if the mosquitos were bad where we’d just come from. Apparently, they had a reputation.

We crossed a few small streams and climbed here and there for better views of the lake. We also passed a couple on horseback.

The hike was really all about peacefulness and contemplation as we traversed the meadows and put some miles under our boots. It was just what we needed after the last hikes that were strenuous and sometimes overcrowded. We arrived back at the trailhead parking lot glad we’d made the effort to see the peaceful lake, and we quickly tossed our gear and ourselves in the truck lest we feed more mosquitoes.

Our plan had been to relax and we hadn’t really done that yet so we headed to the visitor’s center for showers (and laundry—not necessarily relaxing but definitely needed). Showers were $5 each and honestly, we’d probably each have donated a kidney for them if we had to. Laundry set us back $6, which was also well worth it. We used the wifi at the laundry and caught up on email and news until the clothes were dry. Then we walked down the hill toward the marina to find a spot to relax along the shore of Jackson Lake.

We did actually rest briefly on a bench until a French couple on the next bench over asked us what “mace” was. We thought they meant bear spray until the man said someone told him there were two on the nearby peninsula trail. Ahh, moose. Thanking him for the tip, we excitedly set off on the trail to find the “mace.”

We never did find any moose but instead we stumbled across three tiny bear cubs, foraging near the lake. We were extra cautious when we saw the mother trailing them—getting between a mama bear and her cubs is a good way to find out the efficacy of bear spray or how fast you can run. She was beautiful and not afraid of a couple of rangers who were shadowing her, and at one point I thought she might charge one of them as she wheeled around to face him as her cubs climbed a few feet up a tree on signal from her. Eventually, they ambled along and we followed her progress from a distance, the rangers trying to keep the bears away from unsuspecting visitors. We felt elated to finally have seen some of the most beautiful animals the park is known for and the triplet cubs were a bonus.

We still hadn’t found our relaxation so we headed back to camp to make dinner. Just after we finished, it began to rain off and on so we retreated to the truck and felt the cooling breeze, where we finally relaxed until bedtime.