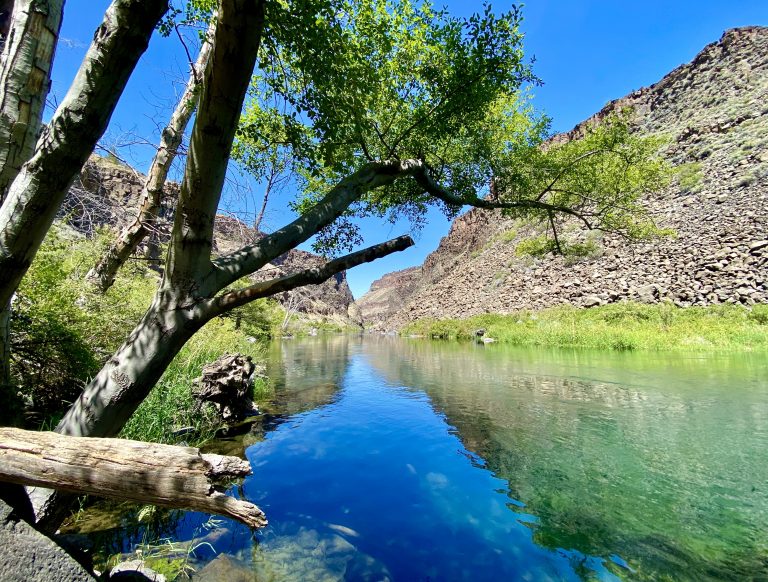 The terminus of our trip was supposed to be Glacier National Park. We were going to head there first, but five days of forecasted rain and lack of snow clearing made us change our plans. And now the weather foiled us again, as more rain was forecast there. We’d just have to do Glacier another time. Neither of us was particularly disappointed because we’d already enjoyed two spectacular national parks on this journey and it almost felt like we needed a break from all the grandeur.

Instead, we decided to head from Bozeman to Missoula, Montana where I lived for several years when I was in my 20’s and where my kids were born. It was also the first place I lived that I truly loved. There would be few other opportunities to see it in the future and it was only three hours out of the way.

When we arrived, we found the little two-bedroom house I bought in 1981 for $37,500. It was showing some wear, yet Zillow said it was worth almost $300,000 now. I tried to look up some co-workers from nearly 40 years before but none were available.

We headed to the downtown area and wandered down streets that still housed many of the same buildings that were there all those years ago, though the stores and restaurants had mostly changed. Throughout the downtown area construction was booming—Missoula was growing fast.

When we strolled to an area near the downtown riverfront we quite unexpectedly stumbled upon the building where my first tiny rented house was. I paid only $50 a month if I mowed the grass.

I’d often thought Missoula and our current nearby hometown of Chico, California have similarities—both are charming small college towns close to the mountains. As we walked around downtown Missoula, I realized I like Chico better. While it’s not true that you can never go home, it is true that it will never be the same.

Leaving Missoula, we headed northwest through the mountains of Montana and Idaho on stunning Interstate 90. The highway repeatedly crosses the Clark Fork River as it meanders through the mountains. The headwinds were fierce, buffeting the truck head-on at 35 mph. Driving at the 80-mph speed limit, the 115-mph headwind was deafening and we could barely talk to each other. I kept wondering if the Yakima Skybox on the truck’s roof would blow away. 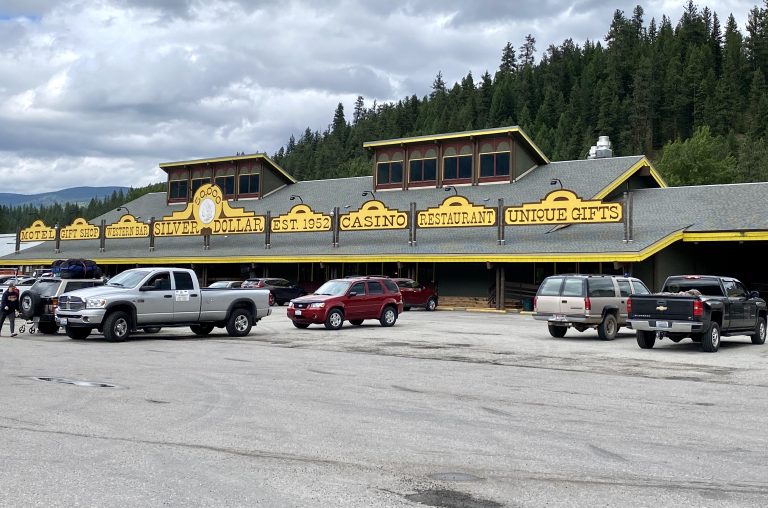 We made a brief stop along the highway at the Silver Dollar Saloon in St. Regis, Montana. Our friend Ti had told us about it—he’d stopped there years ago while on a motorcycle trip. It reminded us of South of the Border (between North and South Carolina)—there were billboards advertising the tourist trap every ten miles or so, starting 75 miles away in Missoula.

It’s a kitschy roadside attraction. The walls are lined with silver dollars—there are actually about 70,000 now, as they add more every year. This being lightly populated Montana, it turned out to be quite unlike South of the Border since it was pretty small and there were no crowds. We were glad for the quick stretch break but stayed only long enough to take a peek at the saloon and use the exceptionally clean restrooms.

We emerged from the mountains after Coeur d’Alene, Idaho and headed south through the eastern part of Washington. The road was flat and the temperature much warmer, but the wind was still fierce. We crossed the curving, mighty Columbia River twice—first at Kennewick, Washington and then at Umatilla, Oregon. That made four (large) western states in one day.

After hours of being blown around, we finally pulled off the highway on a dirt road toward an obscure campsite Susan found on iOverlander. The app recommended a site by a small pond on the grassy plains just off the highway and down an embankment near the Columbia River. When we arrived, we parked the truck by the pond and took a walk along a windy path toward the river.

As usual, going just a bit farther has its rewards. We discovered another short dirt road that led us to perfect spot right in front of the river where a local fisherman was smoking weed (the pungent odor wafted through the air) and trying for a catch before sunset. We chatted with him briefly, went back to our truck and made dinner in the lee of the truck to prevent the wind from blowing out the stove. 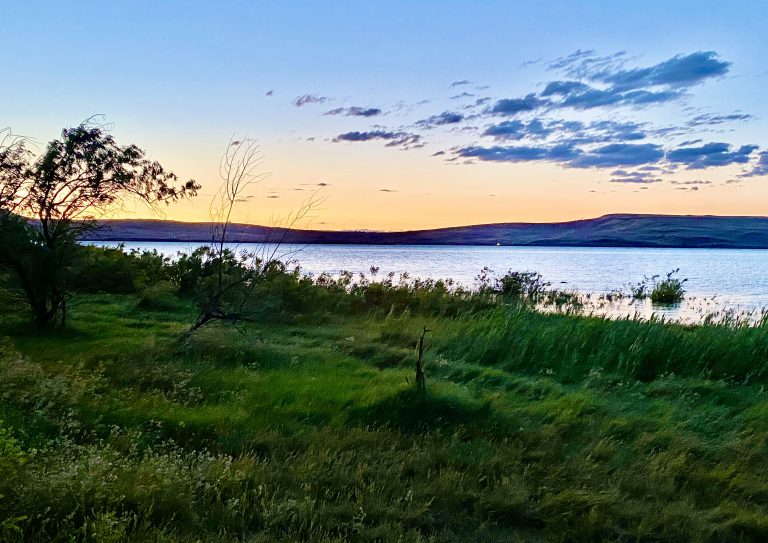 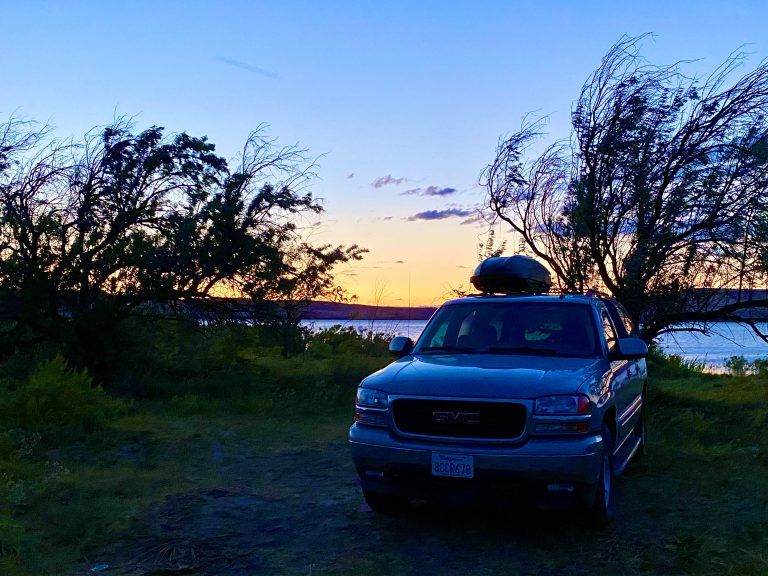 Once the fisherman departed, we moved our truck to the idyllic spot by the river just as the sun was setting. The wind abated somewhat for the night and the only sound we heard was an occasional train passing by.

We woke after sleeping soundly by the river and then drove less than a mile to a truck stop where we washed up and filled the tank.

Then we drove along the Columbia River Gorge, wind surfer heaven, until we arrived two hours later at The Dalles. A restaurant there was highly recommended for breakfast, so we donned masks and found dispersed seating inside. Breakfast was indeed awesome and so plentiful we took much of it with us.

Leaving the river, we went south into winding, arid, beautiful foothills with distant views of Mt. Hood. The road went through the lovely outdoorsy town of Maupin, Oregon, situated on the Deschutes River and an apparent haven for whitewater rafting enthusiasts. From there, the road went mostly through wheat fields and dry grasslands and eventually the Three Sisters and Mt. Bachelor came into view.

We decided to take a break from the drive when we reached Terrebonne, Oregon, about 45 minutes north of Bend. We had looked at houses there several years before when we took reconnaissance trips to Oregon and California, searching for a place to live when we moved west. It was a spectacular area, though we’d ultimately decided it was too isolated, too cold in winter, and too far from Bend. But the canyons and the views of the Crooked River were gorgeous.

We found a challenging loop hike in the Crooked River Ranch section of Terrebonne that would bring us down a steep canyon to the Crooked River’s edge. It was located in a remote area on BLM land and there was only one other vehicle parked at the trailhead. Perfect. Or so we thought until we started the hike. It was hot and dusty and the trail wasn’t well marked. But when we walked along the canyon’s edge and then found the narrow, steep path down to the river we were captivated.

We lingered in mottled shade deep in the canyon along the riverbank, removing our shoes and dipping our toes in the cool water.  We gazed at the river’s rainbow of shimmering blue and green hues and enjoyed the serenity. 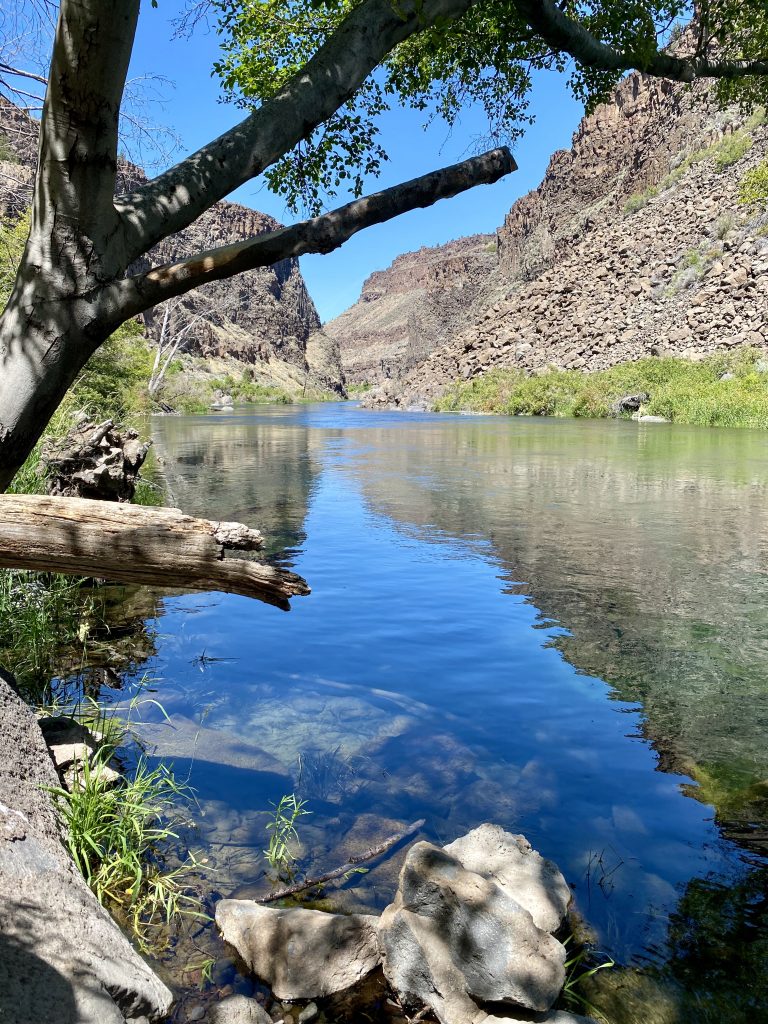 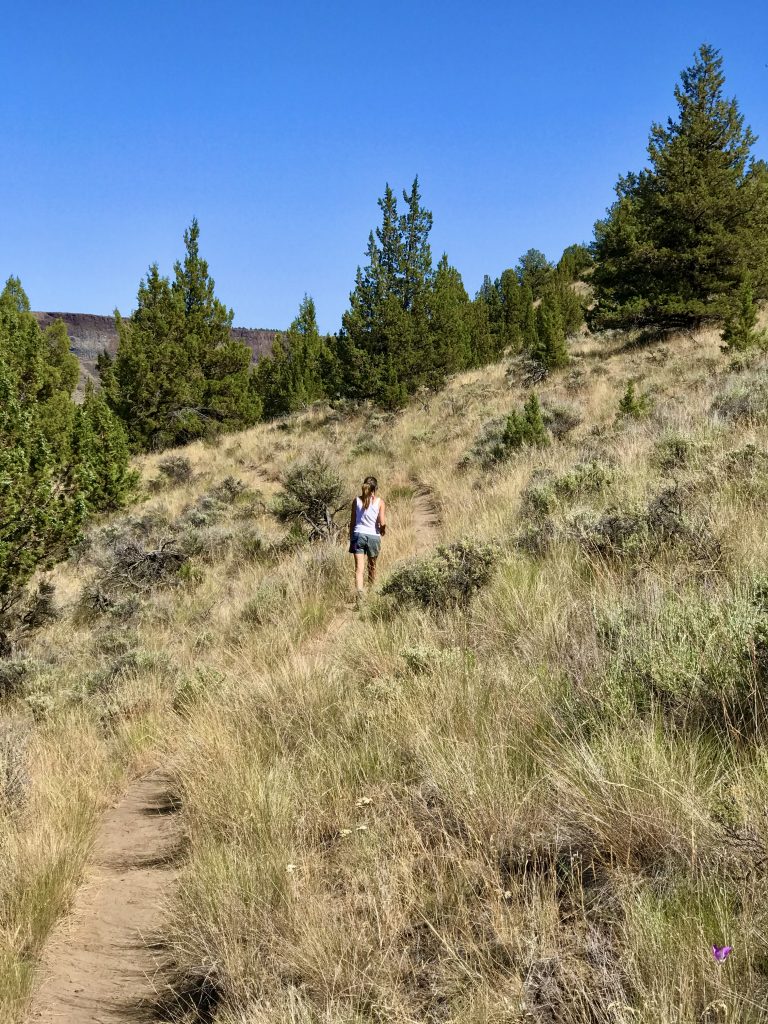 The return portion of the loop was steep, challenging and felt endless, but after long hours of driving—and more to come—we were glad to have taken the hike.

Leaving Terrebonne, we headed south through Bend, Oregon crossing our outgoing tracks from two weeks earlier. It was already mid-afternoon, and we discussed our options for the night. We considered camping in the national forest south of Bend, but we both knew that with home just five hours away we would likely head all the way home and sleep in our own bed no matter how late it was. When we know the trip is finished, we make a push to get back. As much as we love traveling, we love our home too.

The long drive through central and southern Oregon is nearly all through forest on a two-lane road. At one point near where we had considered camping, we saw a forest fire nearby. Nothing too big, but we were glad we had decided to head home.

The route through the forest was pretty—then when we approached the California border it became spectacular. For a couple of hours, the giant snow-capped Mt. Shasta volcano was in view. Eventually we partially circled it, as well as the adjacent cinder cone. We’d seen Mt. Shasta on prior trips from a variety of vantage points, but this was a new one and was the closest we had come to it. We made mental notes that there were plenty of access roads and surely many trails to hike.

Eventually, we hit the interstate near Weed, CA just as it was getting dark. Two hours later, at about 11 pm, we pulled into our driveway, too tired to unload. A quick shower, then bed. Unpacking and cleaning would wait till the next day.

We’d covered over 4,000 miles on our trip and had seen some of the most beautiful scenery and roads in the country. Covid had limited us and we weren’t able to meet many people, but we’d been able to hike to some incredible places. If Covid was keeping us from international travel, we could tour the US and find the most spectacular, most remote, and most interesting places in our own country.

After we unpacked the next day, we relaxed on our balcony and watched a spectacular sunset.

We’d enjoy our incredible home for the next month or so, but we also already began considering the next adventure. 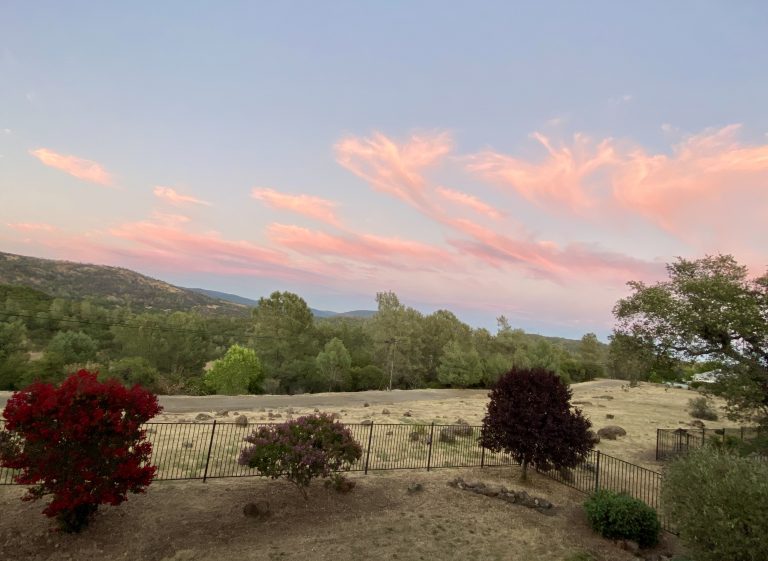 PrevPreviousPost #51: To the most beautiful road in the U.S.
NextPost #53: Musical campsitesNext