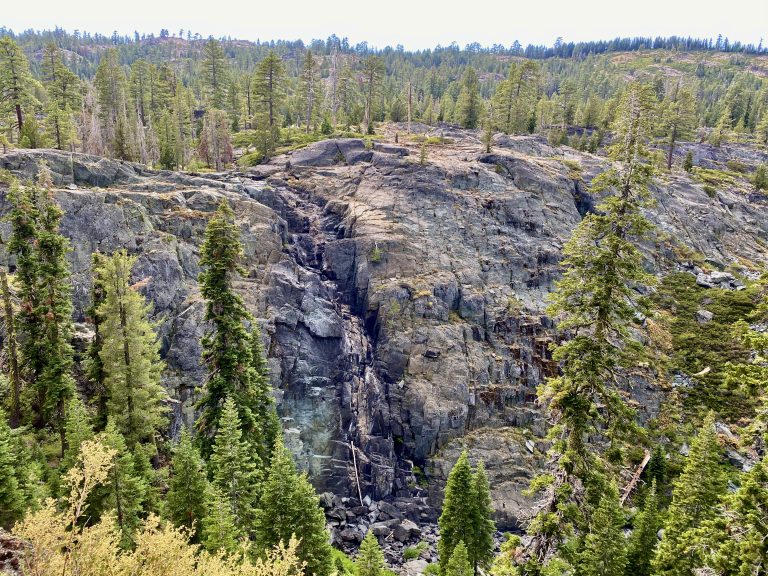 As expected, the sunrise over the lake was spectacular, even if we slept in and missed the first part. It was cool but not cold out, even at 6,500 feet.

We made coffee and walked to the boat ramp, about a half mile away, and sat on the quiet dock and watched the lake wake up.

After breakfast back at the campsite, we brought our chairs down to the pebble beach again and sat watching the sun get higher.

Eventually, we warmed up enough to take the kayaks out. The lake was the perfect size for kayaking with enough space for two days of exploration. We paddled to four rocky islands and I wondered how the lake was made. Dammed? Glacier gouged? A millennia of flooding? A few ducks with ducklings swam around but we saw no sign of fish anywhere in the clear water. We hit every cove on the way back and were content to float back much of the way. The sun was high in the cloudless sky but the temperature was probably no more than 80 degrees and the water was not much cooler than the air. There was no cell signal. Perfect.

Back at the campsite, we were hungry and made lunch. We find we usually don’t eat quite enough when we camp and hike so we try to remember that and fill up when we can. We went back to the beach and several more people paddled in, including a young family with two rambunctious small boys who reminded us of our grandkids in Washington whom we hadn’t seen in months due to Covid. As the sun heated us up, we finally went in the water, which was pleasant to the feet but chilly to the rest of the body. I eventually went all the way in and felt the day’s grime wash off.

We had intended to relax that day and simply kayak and hang out but we found a hike to a waterfall that began walking distance from our campground, so we got our hiking gear on and took off. Thunder had been rumbling for an hour and there were some ominous clouds but we felt they were moving away from us, or told ourselves that anyway. Nonetheless, we packed a very unhiking-like umbrella just in case we got caught.

The trail was accessed via a long dirt road that we discovered had several nice boondocking camping sites along it. We were told boondocking wasn’t possible, but now we had some alternatives if we needed them.

One sign I’d never seen, on a side road off the Forest Service dirt road said, in all seriousness, that the poor road was scheduled to be “obliterated” next year. How would they do that, we wondered? Giant laser beams? Plague and pestilence? Thermonuclear devices?

It was obvious from the road that it was muddy sometimes and there were small dry ponds along it. We were pretty sure the waterfall would be dry too. A couple of miles later, we reached the parking lot for the falls and turned on to the easy paved trail. 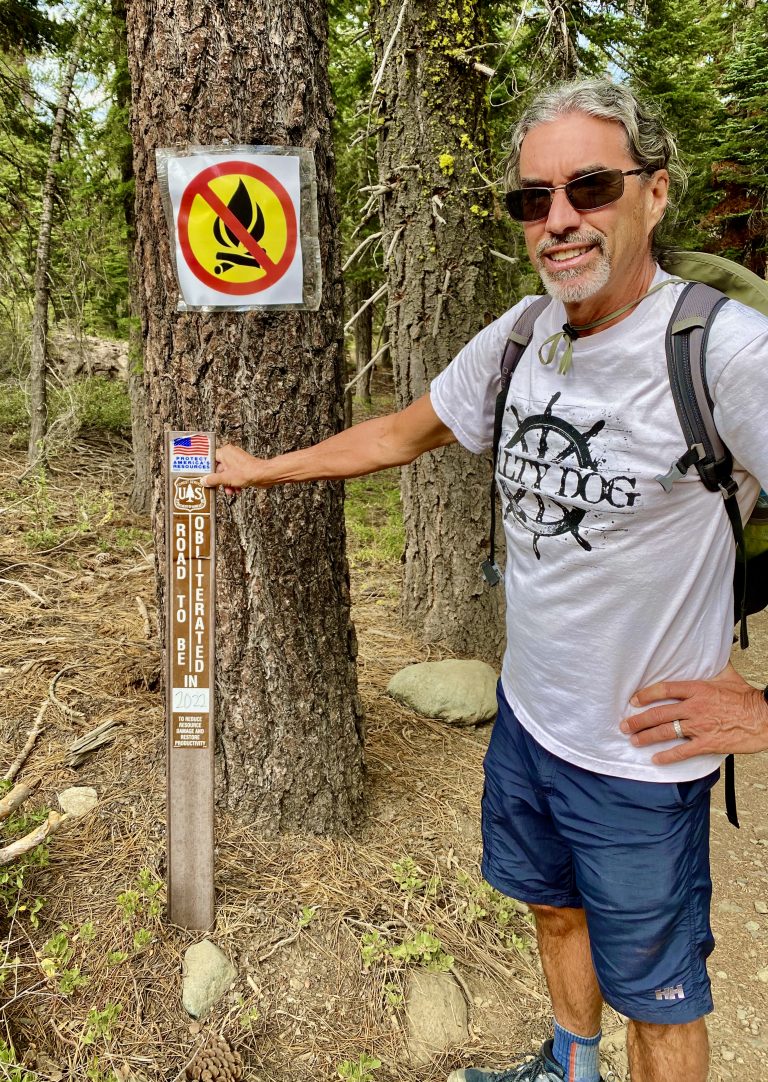 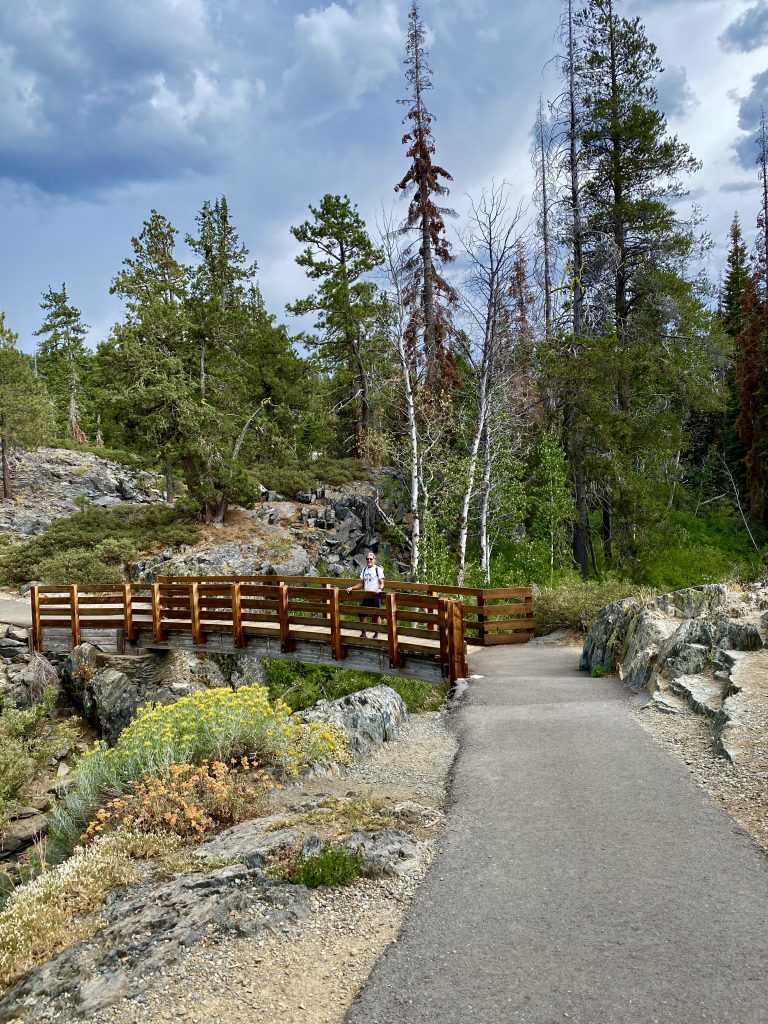 The paved trail was beautiful as it wound around giant granite boulders, through the pine and fir forest and along a pretty bridge over a dry creek.

Eventually we came to where the waterfall would have been and sure enough it was dry, though we vowed to come back and see it in the spring. Giant granite cliffs lined both sides of a narrow canyon and coming in at right angles was where the falls normally spilled in. The Frazier River falls over 160 feet to the canyon floor with several cascades before them bringing the total drop to over 200 feet – a major league waterfall. But in mid-August it was bone dry. A sign nearby said the area and the falls themselves—and Gold Lake where we were camping—were all glacier carved. We figured seeing the falls when the snow melts and the roads first become accessible in the spring would be best so we noted to return then.

The trek back up the dusty road was arduous and thunder still rumbled constantly though we never felt a drop. An occasional car passed and tried to slow to limit the dust to no avail. Fortunately, our campsite was steps from the lake and when we finally returned, we donned our camp shoes and simply walked into the lake, our weary feet celebrating. All hikes should end this way.

After dinner, which I enjoyed with a little white wine Susan had brought in a squeeze bottle (we avoid bringing glass when we camp and this was a way to bring some leftover wine we had at home), we strolled back to the boat ramp to end the day as we began it – watching the tiny waves and a few paddle boarders and kayakers.

Back at camp, new folks had moved in next to us and their loud music and two dogs worried us. But they quieted down and we had a peaceful night as the thunder rumbled into eventual silence. Then they unquieted.