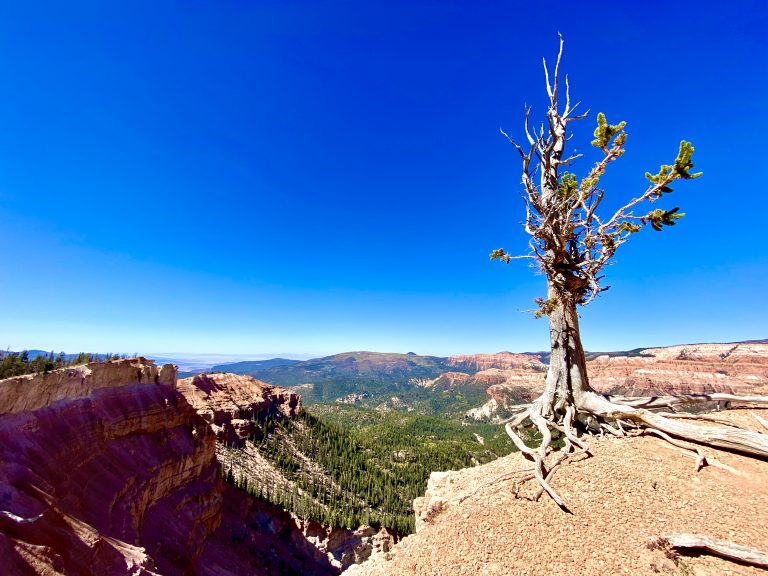 We woke at dawn after an agitated sleep and immediately checked for an update on the fire near home. Fortunately, the news was very good—firefighters had kept the fire contained and our town was no longer under an evacuation warning. We exhaled and decided to continue onto our next adventure, relieved to have dodged a bullet. 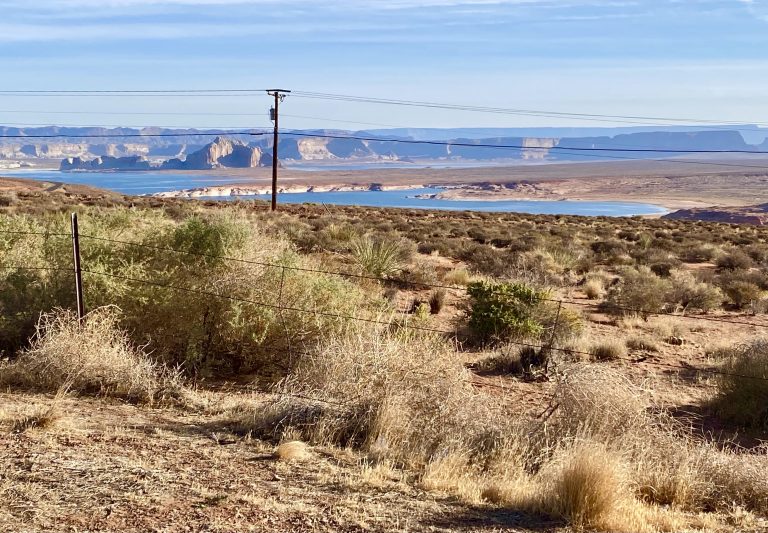 We got our Covid-safe hotel breakfast (a bag with a hard-boiled egg, juice, a packaged mini-muffin, and instant oatmeal—we enjoyed the juice, saved the eggs in the cooler, tossed the unhealthy rest), and took off, leaving beautiful Lake Powell behind. We were confident we’d return someday to explore the huge lake, starkly blue within the brown and red surrounding landscape.

Our first stop was Kanab, UT, where we found coffee, a healthy breakfast sandwich to-go and a park service visitor’s center—which was closed but had a kiosk with lots of maps and brochures. Susan studied the newly-acquired Utah map for where to head next. We decided not to explore more of Arizona—saving that for a future trip that would include Marble Canyon and the North Rim of the Grand Canyon. Instead, she showed me a squiggly route that would deposit us in a few hours at Cedar Breaks National Monument—another off-the-beaten-track place that she’d read about. Squiggly routes always interest us because it means the road would wind around mountains with lots of curves and usually great scenery. So we took it, not knowing what to expect of the road or the destination.

We were surprised as the road climbed higher and higher. Soon, we were out of the dry sandstone desert and into real trees. But the road still climbed until Susan said with surprise that the GPS indicated we were over 10,000 feet. Neither of us had any idea we’d be at such high elevation. The road ascended through pine and fir forests with many aspens between the evergreens already turning a lovely gold from the cold nights.

Upon arrival at Cedar Breaks, we stopped at a small Park Service booth and picked up a hiking trail map. We decided on the four-mile trail to Spectra Point and Ramparts Overlook.

The trail started above 10,000 feet and gained a few hundred feet more, so the air would be thin. We took a quick look at the view from near the parking lot, layered up against the chilly air, put water and snacks in the daypack, and set out.

The trail initially went down, then up and then descended slowly to a spectacular lookout at one mile.

The trail was breathtaking. It overlooked bottomlands over a thousand feet down, while skirting around steep red sandstone walls, undulating with huge crevasses and giant spires below. 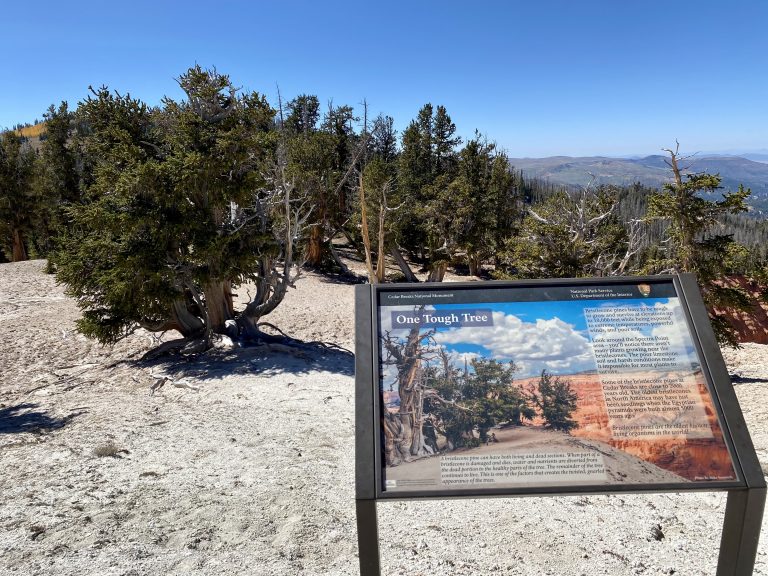 What was most surprising was that the trail was surrounded by pines and firs and, in some places, bristlecone pines. A sign informed us that some North American bristlecones are among the oldest living things in the world, at over 5,000 years. The ones at Cedar Breaks were “young” 2,000-year olds.

There were not many other people on the trail and most of the few we saw turned around at the first lookout. But the trail continued up and down through the trees and along the rim, eventually bringing us to an even more spectacular overlook.

Once we reached the second overlook at the end of the trail, we drank in the impossibly glorious scenery, standing on the edge of the world. While the view below wowed us, we could see at least 70 miles off to distant mountain ranges from our vantage point.

We sat on a bristlecone pine root, enjoyed a snack, and savored the view with the sun warming us against the chill wind. We were well above 10,000 feet and the cerulean sky was unbelievably bright and clear.

As we headed back up the trail, I heard the sound of water—always surprising in the desert, especially at this elevation. Of course we had to go slightly off trail to find the source. A small, cold stream flowed gently nearby.

Back at the truck after our phenomenal hike, we continued along the lonely and beautiful mountain road. At one point, we stopped to see hundreds of sheep that came up to the edge of the road but, even without fencing, stayed off the asphalt.

The red rocks gave way to forests as we passed through the Dixie National Forest. We passed beautiful vistas, including vibrant yellow aspens that contrasted against a blue mountain lake and unexpected lava flows adjacent to the road.

Eventually our empty road merged with another that was more crowded, with cars heading to popular Bryce Canyon National Park. But it wasn’t long before they turned off and we again had the road nearly to ourselves. We’d visited Bryce a few years before and instead were heading toward Grand Staircase-Escalante National Monument.

It was getting late so we scoped out dirt roads off the highway, looking for a place to camp for the night. We found one road that looked like it went down to a small river surrounded by 200-foot vertical walls. The dirt road narrowed until the truck was getting new pinstripes from the bushes closing in. Eventually, we found an even smaller turn off that was right by the river. Perfect. Except for the bloated dead cow twenty feet away.

We followed another narrow dirt road towards the river and finally found a pretty spot under some pine trees, tucked back near the river and high canyon walls. After all the meandering through dense brush, I wondered if we’d be able to find the way out again in the morning.

We enjoyed dinner by the river and then relaxed there awhile and watched the sun chase its shadow across the 20-story high curved riverbank.

Before falling asleep, we stepped out and gazed at the spectacular star-filled night sky. 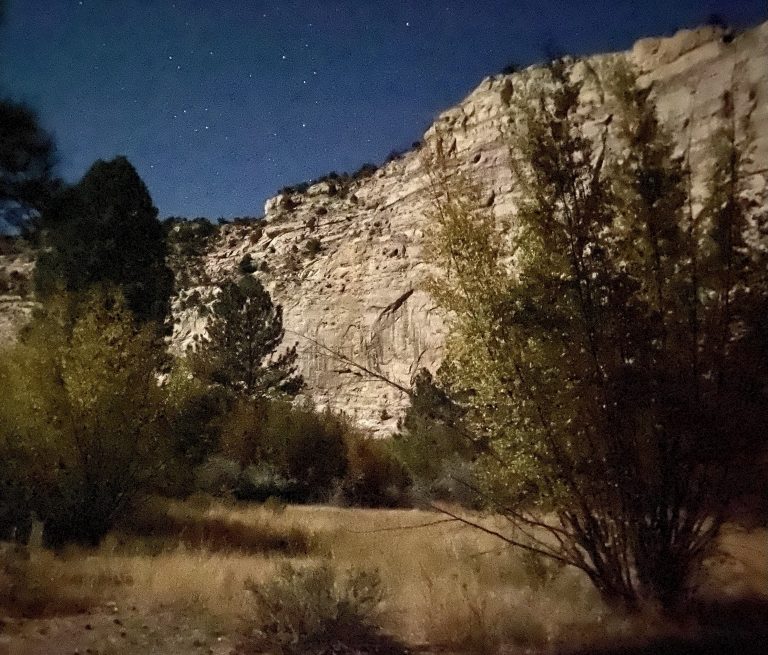 PrevPreviousPost #61: Twists and turns of the road and the river
NextPost #63: From the world’s worst dirt road to the world’s best slot canyonsNext