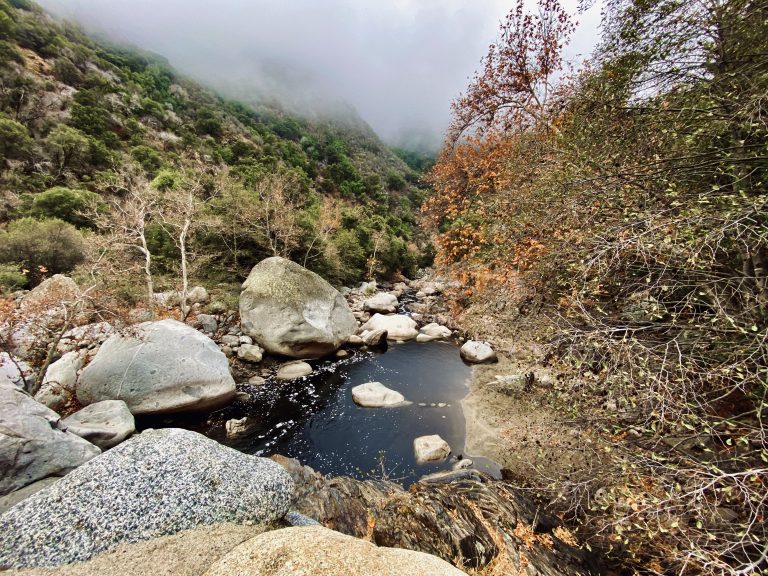 Post #65: So what if it’s December, let’s head to the mountains!

California instituted new Covid restrictions a few days ago. Hotels were closed to all except essential workers, all campgrounds were closed and even dispersed camping was prohibited in national forests. The only allowable camping was dispersed camping in some Bureau of Land Management (BLM) areas. That made it really hard to go camping. But we knew we could find a safe way to travel and somewhere to camp that generally respected the order. At least the state parks, national parks and national forests were open for day use. We didn’t decide where to go until just before bed last night when Susan suggested heading toward the mountains in the southern Sierra Nevada range, notwithstanding cold and likely snow.

By morning we had decided to begin our journey by heading to Sequoia and Kings Canyon National Parks, then head farther south. We packed for a one-week trip. We figured the national parks would have a tiny fraction of the summer crowds and we really wanted to see the beauty of the giant sequoias and perhaps some mountain snow. It had recently snowed in the Sierras but only the higher elevations were affected and we wanted to get as far into the park as possible.

We decided to take California Highway 99, which goes directly through the California central valley towns of Sacramento, Stockton, Modesto, Fresno and Bakersfield, names you can see at exits along the roughly parallel interstate 5 but that are much farther east. Traffic was at least as heavy on 99 as I-5 but at it was a pleasant change from the usual interstate highway.

By about 2 pm, we passed through Visalia, about a half hour from the park. Soon, we drove past pretty Lake Kaweah at the base of the mountains and then through the rustic little town of Three Rivers by the Sequoia National Park entrance.

When we reached the park entrance we were told (1) the Generals Highway connecting Sequoia to Kings Canyon was closed due to snow and (2) without tire chains on board, we could drive only six miles into Sequoia National Park—and the namesake giant trees were not within those six miles. We have 4wd and mud/snow tires, but apparently that wasn’t enough. We knew this was a possibility but we had never gotten around to getting any chains.

We wound our way up the few allowable miles into the park. The sky was mostly cloudy and heavy fog had settled in the canyons so we had only a limited sense of the majesty of the mountains we were ascending. 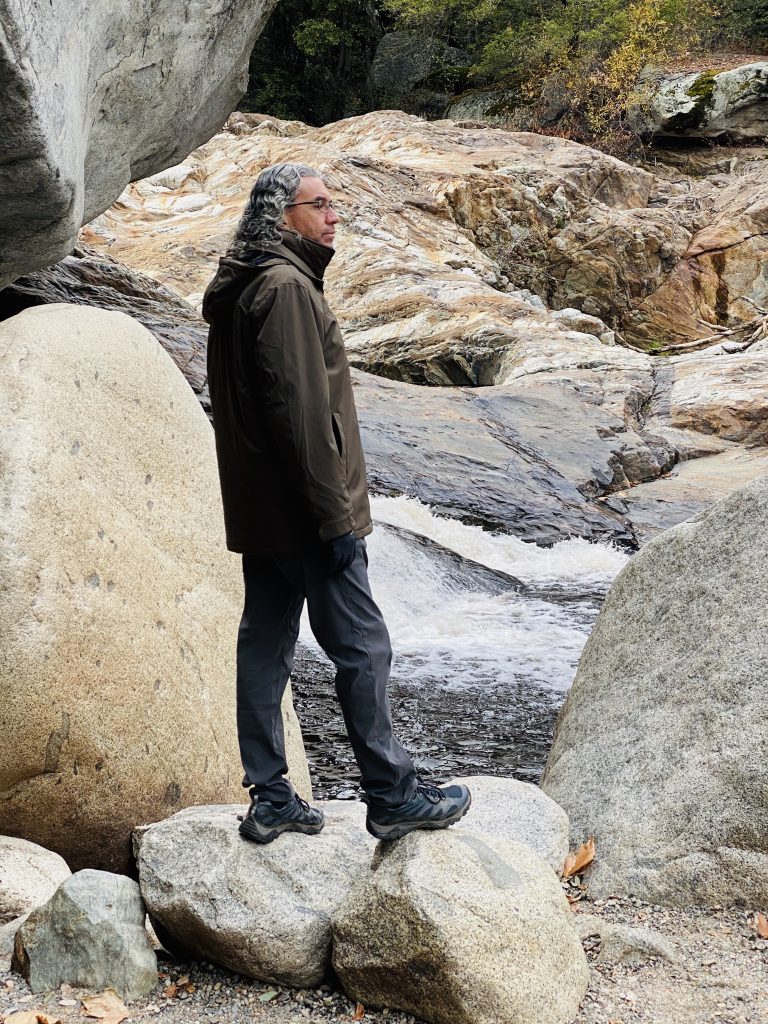 Before the required turn-around, we pulled off to take a short hike to the beautiful boulder-strewn Kaweah River.

By the time we completed the hike the winter sun was already starting its late afternoon descent. 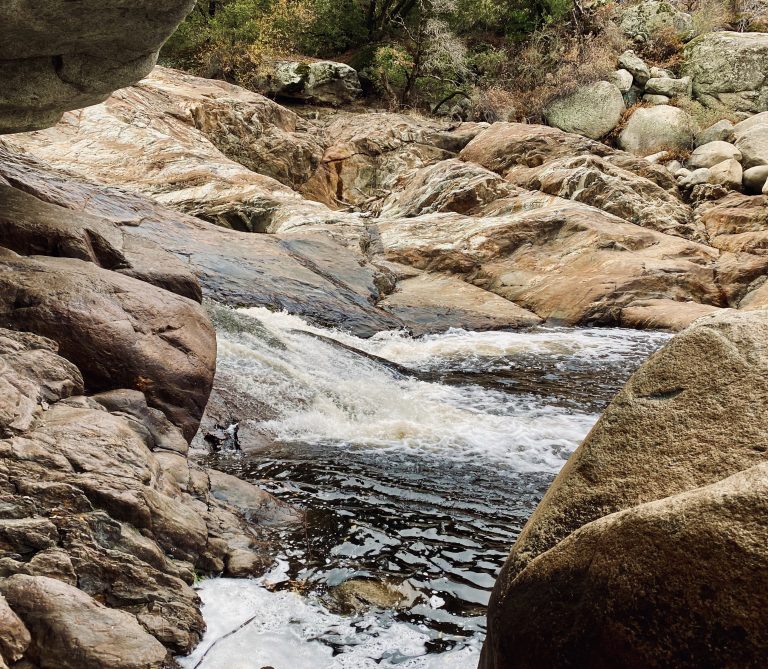 We turned back down the twisty road through the park, passed back through Three Rivers and then looked for a place to sleep for the night. With all the nearby national forest areas closed to camping we knew we’d have to be creative. Our iOverlander app suggested some places to camp just a few miles from the park near Lake Kaweah.

We found a turnoff from the highway that tucked behind a small hill, mostly separating us from the view and sounds of the road. Our goal is to be far from main roads and some distance off of even small roads, but this would have to be home for the night. Sometimes you have no choice. This spot overlooked the lake from high above and was serene in its own way. 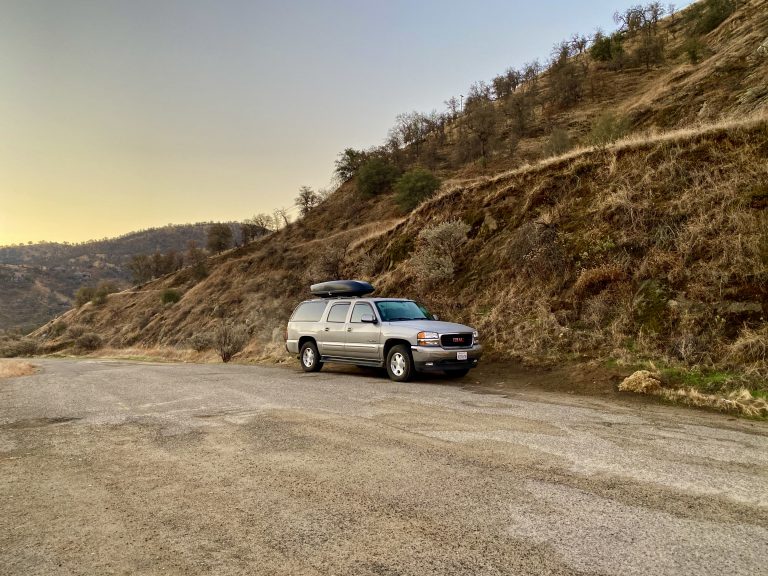 After a dinner of leftover beans and rice we’d brought from home, we crawled into bed early. Our plan for tomorrow was to drive back to Visalia first thing in the morning and buy some tire chains. Stores near the park were renting them for almost what it cost to purchase them and at least two places didn’t have our size, so we decided to buy some—someday we’d likely need them. We hoped that with the chains we’d be able to drive as far as the sequoia groves but now that the road to Kings Canyon National Park was closed, we’d have to wait until spring before we could venture into that park as well.