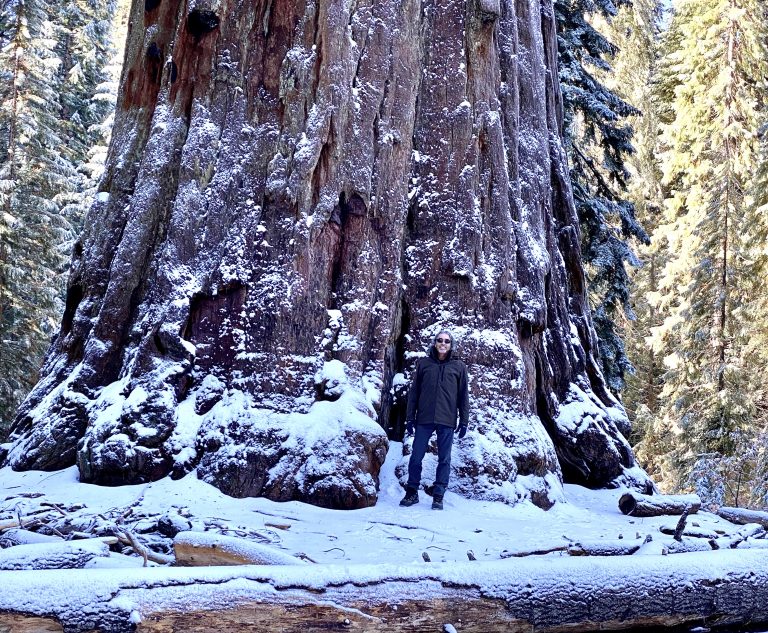 Sleeping next to a highway rarely makes for a good sleep, but because this one mostly went into the park, it was lightly traveled and the large hill sheltered us from most of the light and noise of the light traffic. At around 10:30 pm, I heard coyotes in the distance howling. At around 2 am, they woke me, this time much closer. I love the wild sound of coyotes as they sing and yip, signaling the start of a hunt, a family meeting or just because they like to.

I quickly went back to sleep—until 5:30 when the sun was just graying the eastern sky. The extra blankets Susan had put on the bed made it a little too warm, despite the 29-degree temperature. It’s good to know what your cold limits are and so far we haven’t found them though we did experience 22 degrees in the high Nevada desert on our return from Utah two months ago and shivered through the night; hence the extra blankets.

Sunrise revealed the beauty of our just-off-the-road camping spot. Unlike last night, today the mountains were no longer shrouded in fog and we could see the snow-covered peaks in the distance. We were even more determined to make it up to higher elevations, so we quickly headed out in search of the tire chains required by the park.

We drove the 35 minutes back to Visalia where we were able to pick up snow chains from Les Schwab tires, the whole transaction taking about 90 seconds. The chipper guy at the counter said we could return them anytime (even ten years from now) for a full refund if they were unused. We did drive-thrus at Starbucks for Susan’s coffee and McDonald’s for my breakfast, filled the tank and headed back to the park.

By 9 am, we were at the park entrance and soon heading to the sequoia groves at high elevation. Unlike yesterday when the park was shrouded by clouds and fog, today the sky was blue and we could see the grandeur of the mountains.

We stopped at the first overlook and Susan quickly reached back into the truck for her jacket. Temperatures were well below freezing.

The General’s Highway was one of the twistiest roads we’d ever been on (with a sign advising a wise 22-foot vehicle limit—our Yukon XL comes in at about 19 feet). The road eventually brought us to the snow line where non-4wd vehicles were instructed to install their chains. I smiled smugly at a lone Prius chaining up as I punched auto 4wd and headed up the slippery road.

As we reached higher elevations, there was more ice and snow on the road and the forests were dusted with new snow. We turned into the parking lot for the 1.5-mile Big Trees Trail that circles Round Meadow for a snow-covered hike with giant sequoias ringing the meadow. We had the place nearly to ourselves and read signs about why the giant trees avoided the meadow (too much water) and how there used to be visitors’ cabins there (fortunately, long gone). It was a great introduction to the massive trees.

Then we drove a few miles farther up the Generals Highway to the Congress Trail. There we hiked 3 miles of curving now-covered paths, first to the spectacular General Sherman tree, the largest living tree on the planet. Some redwoods are taller but no tree is more massive.

It’s hard to describe the size of the biggest sequoias and pictures tend to not do them justice. Unlike redwoods, they tend to grow singly or in small groups rather in whole forests. A lone sequoia next to large old growth pines made the pines look like saplings.

In the grove, the temperature hovered around freezing with three or four inches of new snow on the ground. We’d talked many times about going to Sequoia National Park but we never dreamed we’d be able to get there in mid-December. In past years the park closed due to heavy snowfall by early November.

The trail took us up and around several small groves of the giants with names like The President, The Senate and The House. We thought going to the wilderness would help get us away from recent election politics but now we were faced with political figures who seemed to be doing about as much as their equivalents in Washington, DC. At least this President was keeping quiet and the only tweeting was from the birds.

After the hike, we drove as far up the road as we could, encountering more snow and some ice until a barricade where the high elevation road going into Kings Canyon National Park was closed for the season due to deep snow. So, we came back down the long winding road and eventually past the foothill towns again.

On our map, I’d seen a way over the Sierra that most people didn’t take, along California Route 178 across Walker Pass. It looked to be very curvy (we find these kinds of roads have the best scenery) and not so high that it might have much snow yet. The drive across Walker Pass, we learned, was an old stagecoach route that, though paved now, essentially followed the old trail. In the mid-1800’s wagon trains crossed the pass to get into California without having to take the much higher and more dangerous passes (such as the ill-fated Donner Pass near Tahoe). It made the drive even more interesting. After the road climbed into the foothills, it wound higher, leaving the scrubland and became more lush with forests and streams along the highway. There were almost no other cars on the road and, fortunately, no snow. We were surprised that more people didn’t take this road across the mountains, one of only a few that cross the 400-mile long Sierra range.

It was cold and windy near the pass and the area was devoid of camping options because it consisted of either national forest land (where we could not camp due to the Covid restrictions) or private property. So we headed down from the mountains to where we’d seen a lake on the map. On the other side of the pass, we learned why trucks didn’t take this route. Signs warning of 11-14% downgrades were posted. At one point, I downshifted the truck to first gear and still had to use the brakes.

It was only 4:30 but the sun was already setting when we saw the desert landscape and Lake Isabella in the distance. With darkness approaching, we needed to find a camping spot quickly. As we reached the shores of Lake Isabella we saw a number of camping spots by the lake but they were close to the road and, after last night, we were looking for something more secluded. Suddenly, we saw a small sign on a road that turned off the highway opposite the lake. The sign informed us there was a raft put-in close by so we knew there must be water. We quickly turned onto a sandy road and saw a sign that said BLM land, which we knew was still open for boondocking.

Farther down the road, as the sky was quickly darkening, we saw a steep rocky trail to the river. Susan stepped out and guided me as I drove the truck over deep gullies and treacherous rocks to a flat spot only 50 feet from the rushing Kern River. We couldn’t believe our luck, especially after last night.

The river was noisily rushing over boulders while we quickly heated up the last of our leftover soup as day became night. We would be hearing no traffic noise tonight.

PrevPreviousPost #65: So what if it’s December, let’s head to the mountains!
NextPost #67: Our very own slot canyonNext