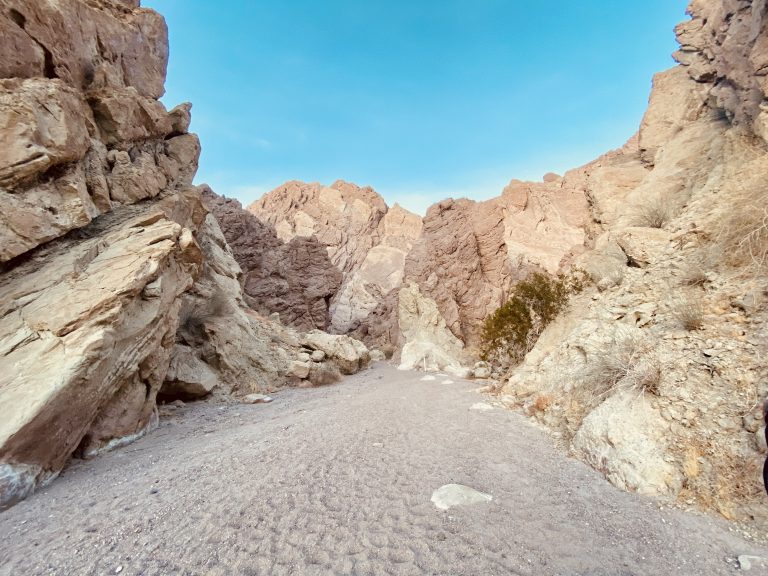 We both woke up a little chilly, but only our faces. The outside temperature was 25 according to the truck when I started it to warm us. The finicky rear heater decided to work today so we were toasty quickly.

Stepping out of the truck, we walked a few steps to the rushing Kern River as four ducks alighted on the water. An egret sat hunched at the edge of the river and a great blue heron cursed at us a hundred yards away as it flew off.

The sun was just rising over the hills as we pulled out of the flat spot, where I engaged 4wd to climb up the rocky and steep part. A large patch of loose sand on the hillside would have trapped us without it. We drove into the nearby town of Lake Isabella, which looked to be a bit down on its luck, though peaceful and far from any large cities. 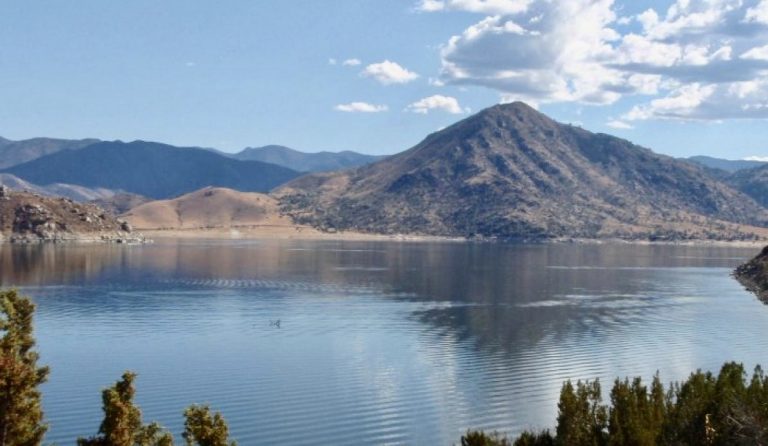 We headed east out of town at “rush hour” on a two-lane highway with almost no other vehicles in sight. It was beautiful, with steep boulder-filled and tree-less mountains on both sides as the road climbed above and around the shimmering lake.

I’d thought that yesterday’s pass would get us across the Sierra, but it was just one of two of the passes necessary. We climbed again, eventually reaching a mile-high before the road wound down to high desert.

There, we stopped at Red Rock Canyon State Park and found the park open but the campground and visitor center closed. There were some picnic tables near the empty parking lot that made a perfect place for breakfast as the sun warmed us through our jackets. 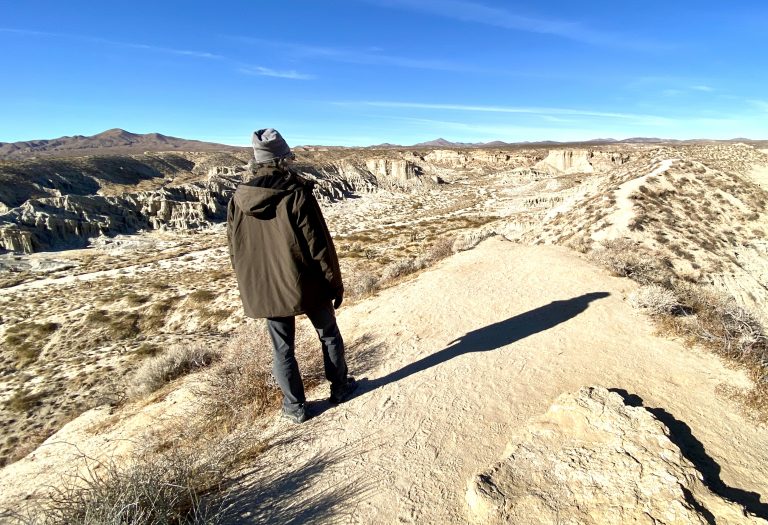 After breakfast, we found a trail that wound up along a rocky ridge and climbed a few hundred feet until we had a great view of the area. The park was enormous, stretching miles away from us in all directions.

We descended towards the closed campground and wandered around the oddly shaped sandstone hills before heading back to the truck. The park was completely and wonderfully devoid of other people the entire time we were there. 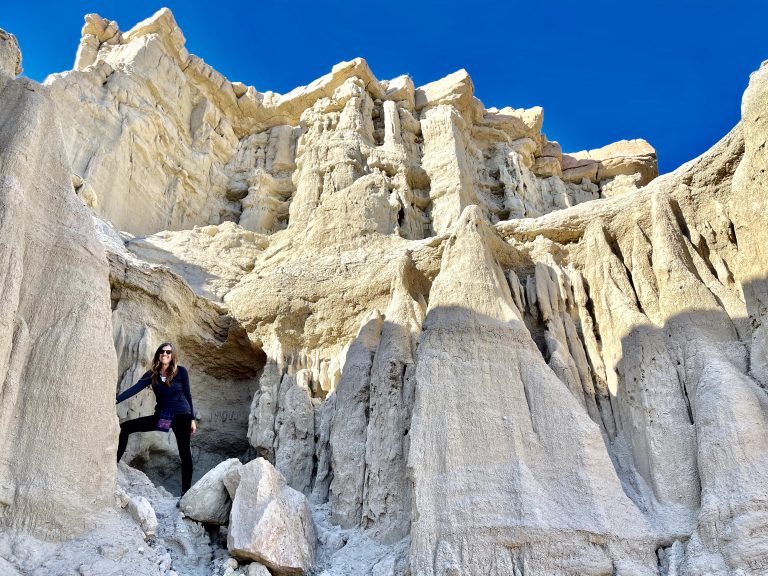 From the state park, we descended further until we eventually turned onto highway 395, which we had previously taken all the way from the Oregon border to almost where we were, and headed south on the slow two-lane road with lots of truck traffic. This would be the beginning of our route through southern California to get where we wanted to go—a BLM area not far from Coachella, home of a huge music festival (canceled this year due to Covid). Eventually, we turned onto Interstate 10 and headed through San Bernardino and Riverside where the traffic was fourteen lanes thick, full of people in a great hurry. We tried not to let it harsh our mellow and soon turned off the frantic highway and drove for many miles onto smaller and smaller roads, eventually turning onto a washboard dirt road. The sign at the beginning of the washboard road said 4wd was required so we knew there wouldn’t be too many people around.

The road led us into Mecca Hills BLM. A few miles in, we saw a sandy path off to the left and drove toward an open area surrounded by some hundred-foot high sandstone hills. Perfect – this is the spot where we’d stay tonight. Our campsite was big enough for numerous campers but being midweek, mid-December and mid-Covid, we knew we’d be alone.

It was peaceful in a way only the desert can be with the only noise from an occasional high-flying airliner, And it was nearly 70 degrees—the warmest we’d experienced in a while. We got our chairs out and soaked it in until it was time to make dinner. After our early dinner we might have stayed right there until sunset, but a barely visible post sign at the back corner of our campground near a sandy path leading to enormous boulders and rocky mounds beckoned us.

We explored beyond the sign and discovered that just a few hundred yards behind where we parked there was what looked like a rough slot canyon that was not identified on any guide, online sites, or map. The sun had just set so we knew we didn’t have much time, but we both love slot canyons and couldn’t possibly resist some exploring.

As we climbed over boulders and up rock-filled sandy washes, each view around the next curve drew us on. Some places were a tough scramble and we knew we didn’t want to come down in the dark so reluctantly we turned back, slipping over a few of the rocks and leaving only a little blood. 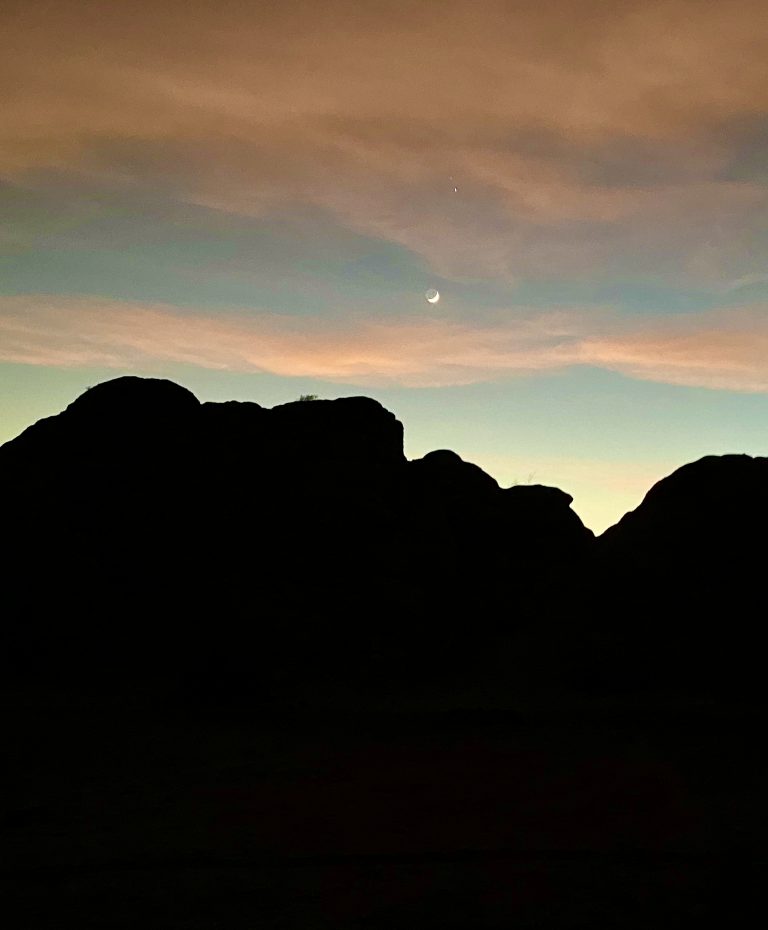 Back at the truck, the sky was darkening quickly as we sat in our chairs enjoying the last of the sun while the air cooled. A tiny crescent moon was setting as stars popped up into the dark sky and an owl hooted. 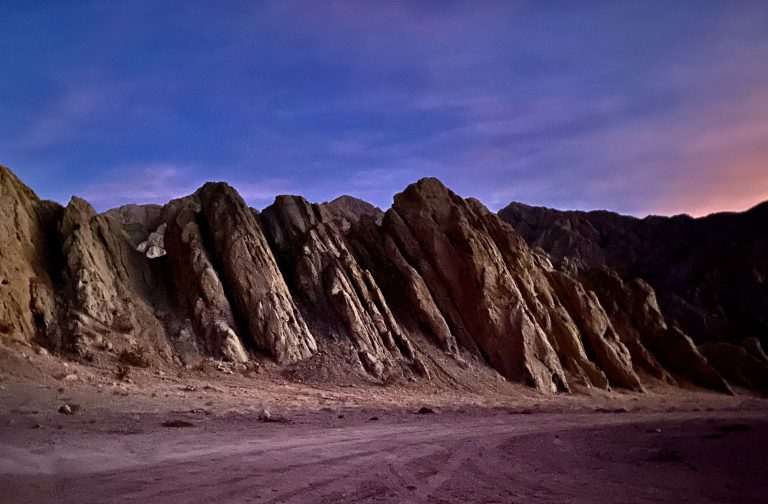 It would not be nearly as cold here as last night next to the river, and the perfect quiet was welcome after the day’s drive and our rock scrambles.