Many years ago, sailing friends, when asked how far south they planned to go, used to say, ‘til the butter melts. For us, it was ‘til the Trader Joe’s peanut butter cups melt. That would be El Chorro, an ecological preserve inland from where we’d been staying. A place where we unexpectedly found ourselves later in the day.

But the real news was the stunning sunrise that blistered the eastern sky at 6:30 in the morning. We both woke at the same time and looked out our big rear window that we face while sleeping and saw the blood orange sky just beginning to light up the rocky point a quarter mile away. By the time camera was in hand, the picture had doubled in drama and we were awed by the continuously changing dark red sky. I remembered the sailor’s saying, red sky at night, sailor’s delight; red sky in morning, sailors take warning. However, further firsthand research revealed that idiom is wrong about 40 percent of the time. Like today 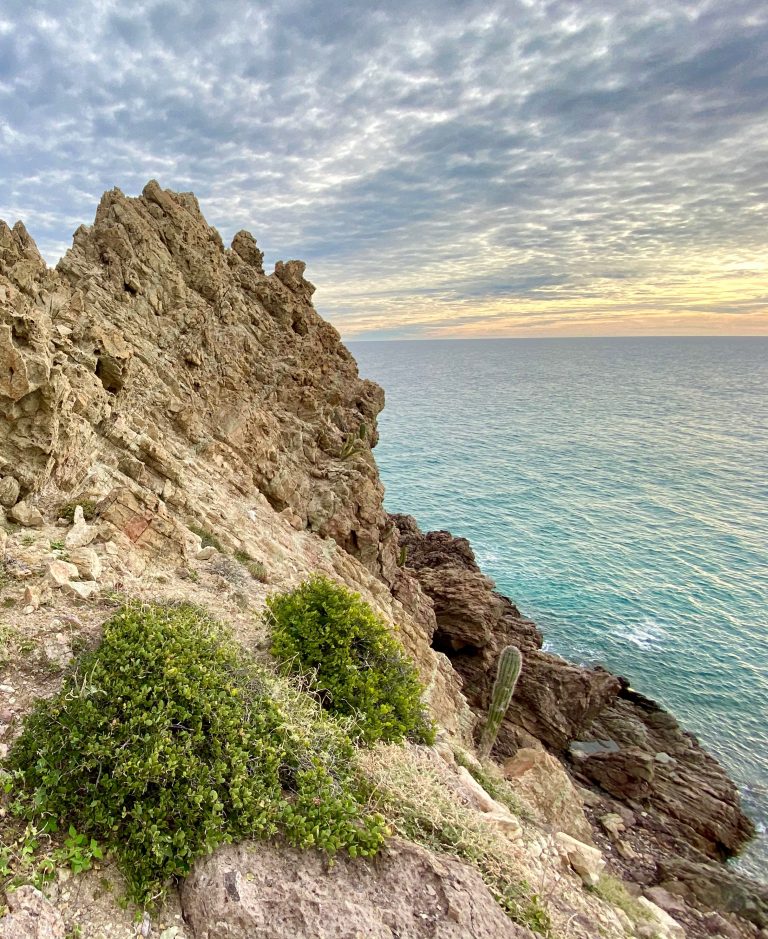 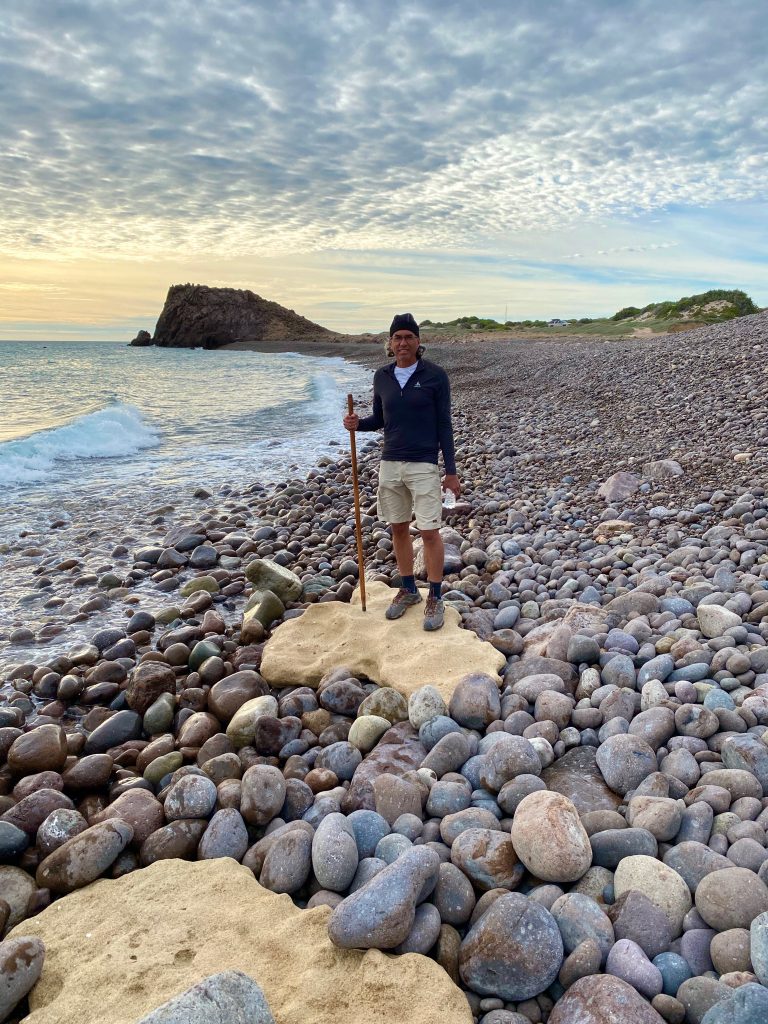 The hike along the beach was multi-levels of assorted size pebbles and this time we slowed down, hoping to find something unique. There was nearly every color (with pinks and blues and browns and reds) and shape (round as a golf ball, egg-shaped, flat and rectangular) but we failed in our quest for a pink heart-shaped rock, though chances were good that somewhere along the beach, five, ten or twenty feet below the immense piles was just such a stone. Someday, perhaps after a big storm, someone will find it.

We walked back into town along the beach this time, for a different view, and ran into the official greeter for Cabo Pulmo, sitting on a former seawall. An aging gringo, Baja Haas lived around these parts going on 30 years he said, with eight months of the year here and four in Polebridge, Montana, which have about equal amounts of people and dirt roads, he told us. A tall lean man with a white bushy under-chin beard and a spotless white shirt, Haas told us the best place to eat, hike, and camp. While his 12-year old dog made the long trip with him over the years, something in his eyes told us he’d suffered a great loss at one time. Baja seemed to be his salve.

It’s curious how Susan and I both think about some aspects of travel. After we were back at the camp, we discussed whether we wanted to stay another day in this magical place, or find a new setting. We agreed to stay, have dinner again in the town, then leave the next morning. But five minutes after lunch, we were on our way inland once again. Such is the way of those in synchronicity.

Before we left our campsite, Creepy Charlie (a name I gave him that would make excellent sense to you having also met him) pulled up near us in his beat up Ford Ranger and asked about the place. We were vague because 1) he was creepy, and 2) we wanted paradise for ourselves. After he mumbled a nonsensical answer to my question of where he was from, he slowly drove away. Friends who were concerned about us traveling in Dangerous Mexico likely would have been surprised to learn that this gringo was far more worrisome to us than any Mexican we’d meet.

In 4wd again, we left the sandy campsite (good job, Yukon) and headed back to the main road. Mexicans love their roads and in Baja there are many, nearly all dirt. This particular dirt road was so rough it was passable only at less than 15 mph but it was wide enough for three or four cars at once. We found this true of many Baja roads, some big enough for four semis to pass but not over jogging speed. After 45 teeth-rattling minutes, we hit the paved section, got lost in a tiny village looking for a grocery store (Mexicans seem to prefer 20 tiny mom and pop stores to one real supermarket), and then had to follow a slow, smoky beat up pickup for a half an hour before our turn off.

Another hour of suspension-loosening washboard road into the hills away from the ocean found us at Aqua Caliente in El Chorro. We were hot and sweaty and three full days from a shower. After taking the last of the three campsites (a pretty place under trees with no wind) we immediately ran into Dino who was from Placer County, California. Dino had been here “a few times” and knew the place well. He instructed us to take his two-gallon bucket, walk up the road a few hundred yards, cross the creek, mosey up the other side and look for three depressions scooped out just on the edge of a pool of water formed by damming the creek. We did and found what turned out to be nirvana for weary dirty travelers. Scooping out more sand with the bucket caused hot water from a spring to fill up the depression from underneath.

The steaming water then flowed into the large dammed pool, warming it a little. So, here we had a natural hot tub and a cool pool. Crazy. We met a family there (a man and his teenage daughter from Tahoe City, California and a woman and her two tween daughters) who also had a home near Todos Santos, a place we’d been looking forward to seeing. The girls were scaling a steep rock wall and cliff diving into the water until one bruised her knee after misjudging the depth.

The girls then sat in a nearby hot pool with their feet in the cooler water and got get a fish pedicure, something we’d seen tourists pay handsomely for in Puerto Vallarta. Susan and I soon put our feet in with the fish as well and, following some initial tickling, the industrious fish cleared off the dead skin leaving us with super smooth feet.

After soaking luxuriously for a while, we realized a little biodegradable soap would go a long way toward cleanliness. I rushed back to the truck and got some and we soaped up and rinsed off. Twice. Oh, the luxury of clean. Our $US10 “donation” to the park was worth every penny. 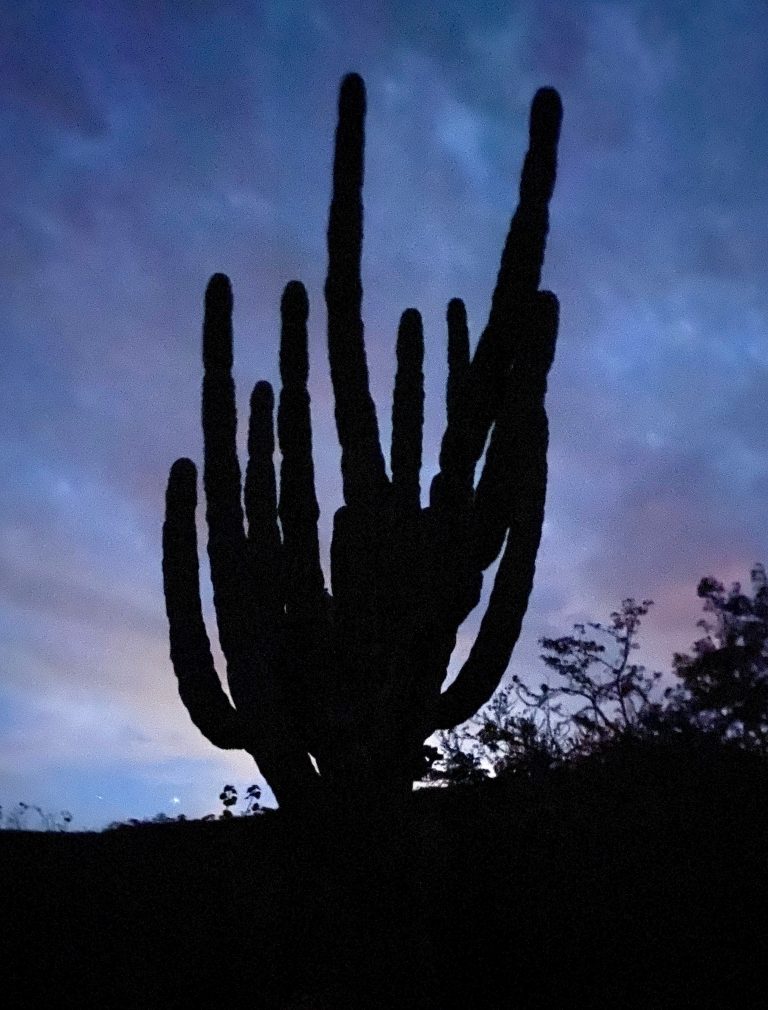 PrevPreviousPost #7: How far is that lighthouse?
NextPost #9: Choice is the richest luxuryNext