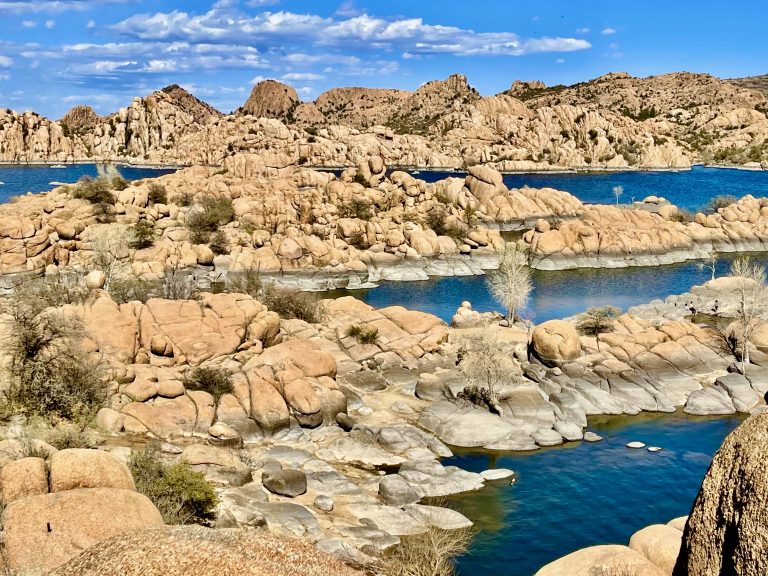 Lulled by the strong wind rocking the truck through the night, we both slept soundly. By morning, the wind had almost entirely died down and the sun warmed us while we made breakfast. Today, we’d be driving northeast to reach Prescott, AZ.

Before we knew that our house had survived the 2018 Camp Fire in California, Susan and I had considered Prescott as a possible place to move if we no longer had our home, but rejected the idea because dry, forested Prescott was also not immune from wildfires, the winters were too cold, and the politics seemed too conservative. Nonetheless, we’d been intrigued by the small Wild West town and the photos we’d seen of beautiful nearby Watson Lake.

En route, we passed through tiny desert towns before ascending steeply into the hills of the Prescott National Forest, where the temperature dropped and the scenery quickly changed from sagebrush desert to oak and pine forest. Less than three hours later, we’d arrived in the charming downtown.

Susan had found us a historic 19th century hotel, Hotel St. Michael, across from the town square for a great price. It was only around noon when we arrived but we decided to see if we could get an early check-in so we could take much-needed showers before exploring.

Unfortunately, the guy at the front desk informed us that our room wouldn’t be ready for three or four hours, so the showers would have to wait. But he asked if we were AARP members, then lowered the already-low price by 15%.

We decided to head out to explore Watson Lake until our room was ready. Ten minutes later we’d arrived at a lake that was even more beautiful than in the pictures we’d seen.

The large lake is surrounded by the Granite Dells—massive piles of rounded granite boulders, with some cliffs towering 150 feet above the lake. The shoreline had many coves and there were a few granite islands scattered around the lake. We explored a few short trails and relaxed at some overlooks, envied the kayakers making their way around the bases of the tall granite walls, and watched children and dogs braving the early-spring cool water temperatures.

After exploring the lake, we drove through a few neighborhoods with views of the lake, thinking back to when we considered living here. Yep, it’s beautiful, but nope, we would not live here with the surrounding forests a potential wildfire disaster. Out of the frying pan, into the fire…

When we returned to town, it was still too early to check in so we took a stroll through the small downtown. Sprinkled among the usual boutiques, antique stores, and small restaurants, there were alleys leading to old speakeasies and signs advertising daily live music (undoubtedly country). There were dozens of motorcycles (mostly very loud Harleys) coming and going, many with jackets indicating the riders were from California. Our hotel was adjacent to Whiskey Row and we decided upon a historic saloon/restaurant for dinner—The Palace.

Eventually, we checked into our room, cleaned up and rested before heading out to The Palace.

The Palace has a fascinating history. Opened in 1877, it was one of about 40 original saloons along Whiskey Row at the time. Wyatt Earp, his brother Virgil, and Doc Holliday were patrons. Virgil lived in Prescott and was Town Constable. Wyatt visited Virgil in Prescott several times and was involved in a few gunfights, killing two men, behind the saloon. Doc once won $10,000 playing poker at a saloon (quite possibly The Palace). He also killed a man inside the saloon during a knife fight. The basement of The Palace was used for gambling, an opium den, and as a jail. During Prohibition, a speakeasy operated in the basement. Upstairs, there was a brothel, and Doc’s common-law wife, “Big Nose Kate,” worked there as a prostitute.

Entering the saloon through the original swinging doors, we immediately knew we’d made the right choice. You could almost hear the spurs jingling from the cowboys coming in for a drink.

The hand-carved bar was too inviting to pass up, so we instantly agreed to enjoy dinner at the bar. During the Whiskey Row Fire of 1900, patrons carried the entire bar out of the burning building. In 1901, following the fire, the saloon was rebuilt and the bar reinstalled. The rebuilt Palace claims nonetheless to be the oldest frontier saloon in Arizona. Looking at the surrounding forests, we hoped the 1900 fire would be the last big fire in Prescott.

The bartenders and servers were dressed in period outfits, including bandit-style kerchiefs as masks. Many of the guests wore cowboy hats and the Western décor included an antique cash register and a huge 19th century safe.

We had an unexpectedly good meal—I had some onion rings and we shared a platter of “Saddlebag Smothered Chicken”—topped with grilled onions and sautéed mushrooms and smothered with melted Monterey Jack.

It didn’t make sense to be in an old saloon on Whiskey Row without a whiskey, so I ordered one. Susan’s dinner went down with a cold local beer.

Another couple sat down next to us and we struck up a conversation. They were visiting from the Phoenix area. Specifically, they lived in Fountain Hills—where we’d be heading in a few days to visit with Susan’s brother who also lives there. The man ran a company that made truck campers and said that business was through the roof with people escaping Covid to go camping. Though we had little else in common, we enjoyed chatting with them while we finished our dinner.

We had thought about going from there to one of the nearby whiskey bars that featured live music, but were too tired. Instead, we briefly listened to some music from the street, shivered a bit in the chilly evening temperatures, then headed back to our room. Overnight, it was supposed to freeze and I worried about some of the food in our roof top carrier freezing and bursting, but not enough to get it and bring it inside. Our room was too warm so we opened a window to let the cool air in. It turned out to be a mistake.