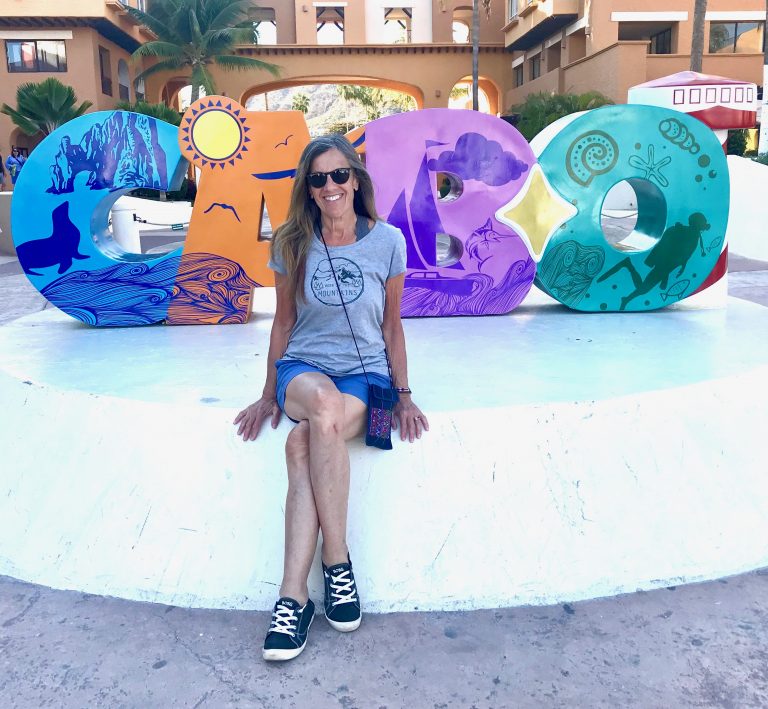 Let’s go sit in the hot pool! The sun was just rising and Susan was already awake. Groggily, I said sure, but in a few minutes. But it’s beautiful now! Ok, ok. I got out of bed, pulled on my swimsuit, (dry already, I marveled) and grabbed a towel. We trudged along the sandy road to the hot pools at Aqua Caliente, where we’d arrived yesterday, hearing nothing but an occasional cow bell from a nearby herd. The air was still and smelled like desert. Dino was already there (in the buff), but if he was disturbed he didn’t show it, though he left shortly after, leaving the digging bucket for us to use again. I dug a deeper pit in the sand and more warm water bubbled up. Squishing feet deep into the sand was almost too hot to bear. It was an odd sensation but very nice early in the morning.

After a breakfast of pancakes and maple syrup, Michael, the only other camper there along with his wife, came over to chat. I immediately liked him – he was Canadian, with a kind manner and voice. He was a teacher and I could see how he’d be well-loved by students. They retired early like we did and were enjoying the heck out of their travels in their small camper pulled with an even smaller car. I kicked myself later for not getting his contact information so I could invite them to stay at our house on their way back north.

By late morning, we were faced with where to go next. Choices… We didn’t want to stay, feeling like we’d gotten enough out of the hot springs. We could pretty much point the truck in any direction that we wanted and just go. When we finally left, we drove through the tiny town of Santiago, with narrow streets where caballeros still rode.

There was not much else between us and Cabo San Lucas so we decided on a beach between two resort hotels in Los Cabos several hours away and took the dusty road back to the highway. Once there, it seemed like no time before we hit traffic (!). Not a newcomer to lots of cars, I tried to not let it harsh my recent mellow. We eventually found the parking area off the main road we’d been told about, drove a couple hundred yards toward the beach and looked around. We found a rather dirty empty lot between two resorts, with a security guard eying us, certain we’d try to crash the exclusive Dreams resort, where people pay $500 a day to be pampered (it had crossed our minds). There was no shade as the noon sun beat down on us while we considered. This was not us.

We were close to Cabo San Lucas now and we could feel ourselves tensing as the madness of a resort town drew closer. We drove off, looking for shade to consider our next move when we were surprised to come upon a Costco, like an oasis in a shopping desert. As it’s one of our favorite stores, we decided to go in, knowing we had no room in the truck to store a twelve pack of canned peas or 24 muffins. Still, it was fun and a piece of pizza from the courtyard later, we decided we needed to experience Cabo San Lucas, though camping there wouldn’t work.

Some nifty googling by Susan found us Los Patios, a charming Mexican hotel for a quarter of stateside prices. We’d resume camping in a couple of days (later changed to let’s go tomorrow, please).

From the hotel, we Ubered 15 minutes into Cabo (about US$4), looking for the Broken Surfboard, a sailor hangout I’d visited 25 years ago while sailing down the Baja coast. It was nowhere to be found. We walked around the clean part of town and had $3 margaritas at the waterfront, then went to the dirty part to see the real town, ending up at a pretty little restaurant where we dined for US$14, which included two beers. Tired and gritty from the town, we Ubered back to the hotel and discussed the next day’s trek. Choices.