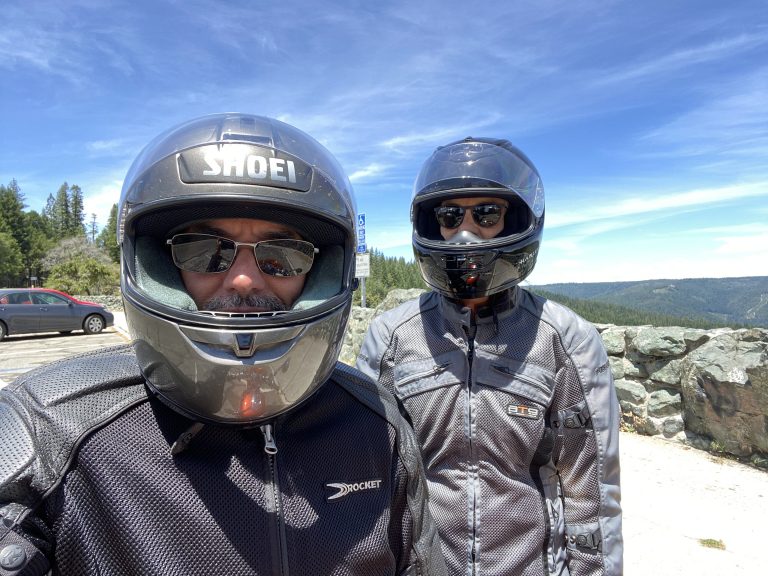 While we love camping, we really love traveling. Camping is an affordable way to wake up in awesome places and allows us to travel more. And while we love Rocky, our big Yukon that we camp in, we also love traveling by car, airplane, bus, train and motorcycle. 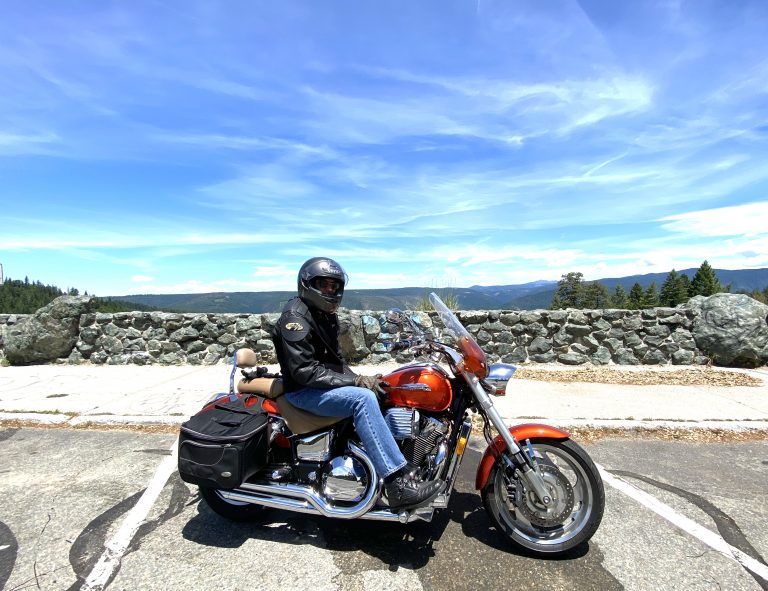 We have a Honda VTX 1800, a brutish cruising bike that is big, bright orange and LOUD. So, this time we decided to do something we’d thought about since we moved to California—take a loop ride to Reno for an overnight stay. Covid was still in full swing but restrictions were being lifted in most states so we decided to book our first hotel room in months along the riverfront in the center of Reno. Everyone knows viruses are afraid of bikers so we reckoned we’d be safe.

We saddled up Brutus around 10 am, after waiting for the weather to warm. The forecast was for perfect riding weather, mostly in the 80’s. But, we’d have to cross Donner Pass on our way, which at 7,250 feet would be chilly. And the wind was forecast to be strong in the afternoon—exactly what you don’t want on a big motorcycle. We always ride with all the gear (including earplugs) but I had to decide on a heavy leather jacket or a perforated lighter one. Being too cold on a bike is worse than being too hot but I chose the light one assuming I could handle some temporary chill. Susan’s perforated jacket has a warm liner, which she brought just in case. We filled the saddlebags with some clothes, snacks, and water and rumbled out of the driveway as the air was warming.

Riding a motorcycle with a passenger is different from riding alone. Bikes are inherently dangerous. Gravel, oil or even a puddle on the road can bring the bike down and other drivers often don’t see bikes (many biker fatalities occur when a vehicle turns directly in front of an oncoming motorcycle). Road hazards are many and far more damaging to a bike—the next time you see a mangled ladder on the highway that somehow got sucked out of a pickup truck, consider what would happen if a motorcycle hit it—and weather is not something you can fix by rolling up the windows and turning on the wipers. It’s risky enough riding alone, but with a passenger, you’ve also got to consider their life too, especially if it’s someone you love. One wrong move and the bike could do down, sliding down a mountain or into oncoming traffic. Even sitting at a traffic signal, a slippery spot under a boot could topple the 1,000 pounds of motorcycle, passenger and gear. These were the thoughts I had as we headed out down the road, probably because it had been at least a year since we rode together last.

On the road, my new Apple watch was supposed to buzz my wrist when I needed to make a turn, but it wasn’t working (that turned out to be operator error) so I had to use my limited memory along with Susan’s shoulder taps to find the shortcut to Nevada City, our first gas stop. Brutus has a relatively small tank and after 100 miles it’s time to look for gas. By 130 miles, you’d be pushing the bike to the next station.

As we climbed to Nevada City a giant fat bug noisily splattered just in front of my eye on my helmet visor. Annoyed at first, I thought about what would have happened had I not had a visor and then I felt better.

Nevada City and its sister town Grass Valley are charming, historic gold rush boomtowns with many original structures still intact. Several years ago, we’d considered moving to the area but the charm attracted too many others, resulting in still-a-boomtown pricing. The towns are located in the Sierra Nevada foothills just before the road begins to climb steeply into the Tahoe National Forest.

We gassed up and I cleaned my visor before we roared back onto the road, which instantly became beautiful. Traffic was almost nonexistent on a Wednesday morning and we climbed the twisty road, suddenly greeted with pine-scented forest. The sun was shining, and the wind felt refreshing. We stopped at one of the overlooks to take in the views.

Before long, we hit Interstate 80, which climbed even more and it began to get cool. By the time we reached the pass, we’d climbed 6,000 feet. The temperature dropped and it was downright cold as my hands cramped up on the bars. I knew Susan was cold too but felt better because I was blocking most of the wind from her. At the top of the pass, we were both thoroughly chilled but I knew once we headed down the other side, we’d warm up. We did, each mile a little warmer than the last.

We roared down the road from the alpine mountains to high sagebrush-covered desert, following the rushing Truckee River down the steep hill alongside us.

We briefly stopped to watch a train pass by on the opposite side of the river.

Nearly all bikers wave as you pass them (watch them sometime), a signal of solidarity, a recognition of the risk, joy and freedom a motorcycle brings. Even the toughest Hell’s Angel rider will wave to a little sportbike. Bikers look out for each other and the sight of a bike stopped on the side of the road will often cause other bikers to stop to help. We passed maybe a dozen bikes and they all waved, which is much harder than it sounds. You’ve got to let go of the left handlebar and jut your left arm out into the 75-mph slipstream—and do it as cool as you can because, well, biker.

Aside from nearly freezing at Donner Pass, we arrived in Reno safely and checked into a mostly empty hotel with a room that overlooked the Truckee River. We really like Reno—specifically the Riverwalk District that’s away from the casinos.

The river cuts right through downtown with lots of whitewater, good river noises, and an even a small island with a park on it.

Locals swim in the calmer sections and tube over the rapids. There’s even a kayak run designed into the park. The day we were there it was sunny and 80’s so people were picnicking, swimming, floating and otherwise enjoying the cool waters. The Truckee River comes from the high mountains and is almost always less than 75 degrees. We climbed onto the boulders and soaked our weary feet in it. 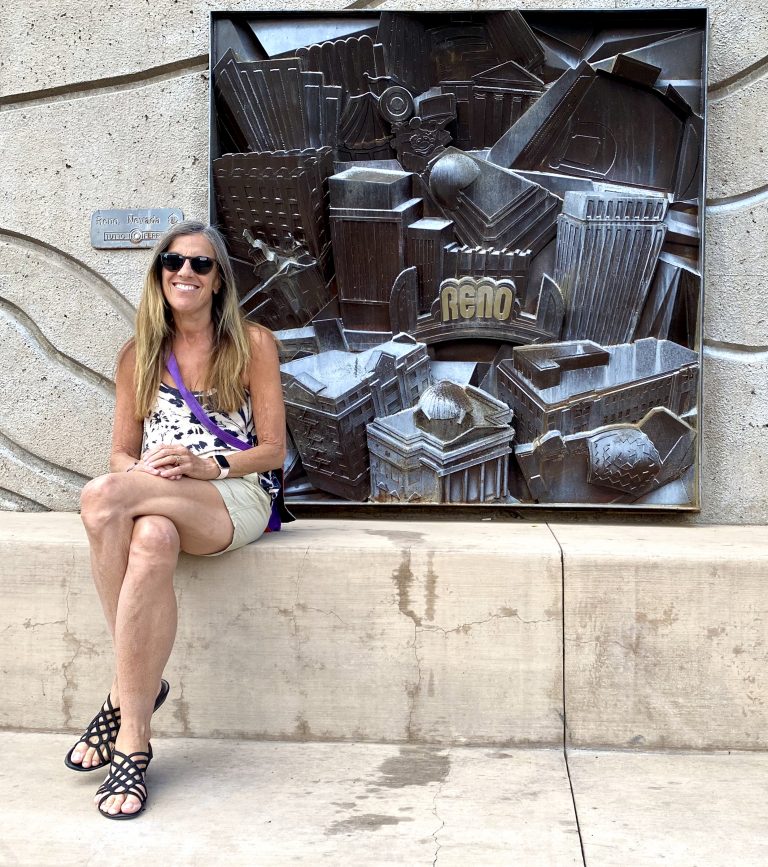 After enjoying the river, we strolled down the cottonwood-lined walking path, past fountains and large sculptures (many brought to Reno from Burning Man).

By then we were were ready for some refreshments so we swaggered (biker!) through town and found a small restaurant with tables overlooking the water. It was our first happy hour in months and it was obvious the staff were serious about being safe; they wore masks as they disinfected everything in sight.

Eventually we headed across the river looking for another restaurant for some food. Our first choice had an hour and half wait (it was obvious people were tired of being cooped up) so we went next door instead to a very hip Austin-like place, which was a giant courtyard surrounded by repurposed shipping containers, opened up with seats and even hammocks inside. The giant bearded “host” rambled through several rules including not hanging out with anyone you might know who shows up later. Social distancing was being taken very seriously. We relaxed with a drink, watching the other patrons, nearly all of whom could have been our kids. A food truck in the corner made terrific $8 burritos. We loved it. Eventually we headed back to the hotel where we could starfish on the giant king bed. Riding a motorcycle can be physically demanding and we slept well.

Our Marriott points had let us upgrade to a nice room and a free breakfast the next morning that the front desk said we’d have to come down and get and bring back to our room in the morning. But when we went down, the smiling staff at the restaurant told us that they had just opened after being closed for over three months. They sat us at a table in the sunshine overlooking the river for a better-than-usual meal.

The forecast for the day was still mostly sunny but with increasing winds. In a car, the weather is not very relevant. You can turn up the AC or heat, hit the windshield wipers in the rain and the wind is NBD. Not so on a bike. Really strong winds can even push a bike into another lane and the wake from semis compounds it. We left mid-morning (my watch buzzing on my wrist as needed for directions) and climbed up out of Reno (another reason we like Reno is the drive is pretty no matter how you come into or leave the town). The wind was tolerable and we settled in to a different highway this time, one that was twisty and long and eventually followed another river—this time, the beautiful Feather River. To us, loops are far better than an out-and-back trip, whether it’s a hike or a drive and Reno is perfectly situated for a loop from our home.

Within a few minutes we were in the groove and, having the day before shaken out the rust of not riding for a few months, we began to really enjoy the ride. Traffic was minimal (and easy to pass on a powerful motorcycle), the temperature was perfect for riding and the road was glorious with twists and turns all the while following the river.

We stopped for gas in the quaint town of Quincy and later stopped along the 2-lane highway for a walk to the Feather River.

In our truck, we can drive 6-700 miles in a day, but after a couple of hours on a bike, butts get tired and sore. Some bikes are set up for long trips with comfy seats and tall windshields, but not Brutus. By the time we got home, a discussion was opened (as we rubbed our sore butts) about getting a different bike if we were going to continue road trips. Brutus is our second bike, the first one being a sportbike (aka crotchrocket), which was also not suitable for long trips. Maybe a touring bike is in our future. There’s something very basic we love about riding a motorcycle on a trip. By design, there is little space for luggage, so minimalism rules. We are far more in tune with our surroundings. Wind, temperature, scents, building clouds, other vehicles, all make for a more intense experience. And really, that’s what life should be about.