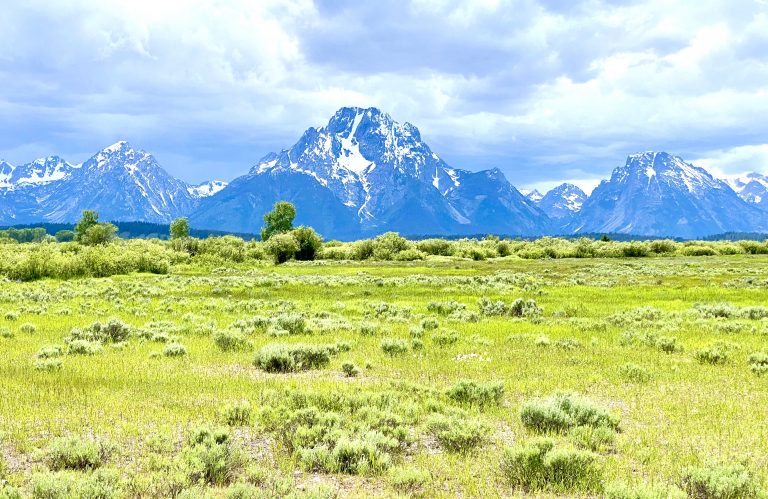 During the night it started to rain and we were glad to be inside. It was a cold rain with wind but we rolled up the windows just enough so the deflectors stopped the rain from coming in and we fell gently asleep to the sound of rain. I woke up once and worried about the steep mud gully we’d have to cross in the morning and how now it might be more like a lake, but I was confident Rocky could get us out.

The alarm went off at 6:40 am so we could be underway by 7. Rocky splashed through the deep mud, slipping and sliding in 4wd, but got through. We wanted to get to the entrance to one of the campgrounds at Grand Teton National Park by 8 am because we were told they might fill up by 10 am, especially with the approaching holiday weekend. After waiting in line for a half hour, we got lucky and snagged a nice sunny site at Colter Bay Campground that we would call home for the next four nights. 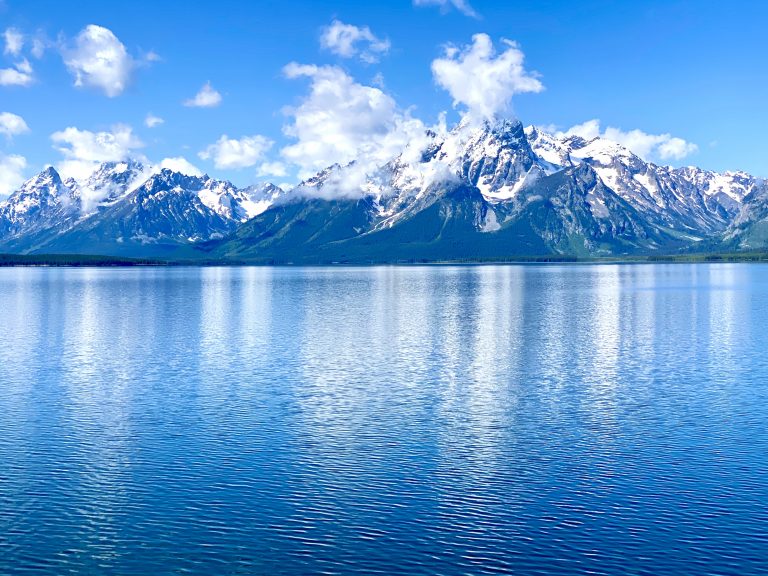 After breakfast at our new campsite, we explored the large campground. There were short trails from the campground down to Jackson Lake and we wandered along the shoreline, taking in the grandeur of the Tetons across the lake. Then we walked a mile to the Colter Bay Village, which had a small well-stocked store, a visitor’s center, free wifi, as well as laundry and showers (!). We’d need those in a day or two.

We wandered down to the nearby marina where we found the trailhead for a nice hike around a peninsula on Jackson Lake to round out the morning. The majestic mountains were a constant backdrop. 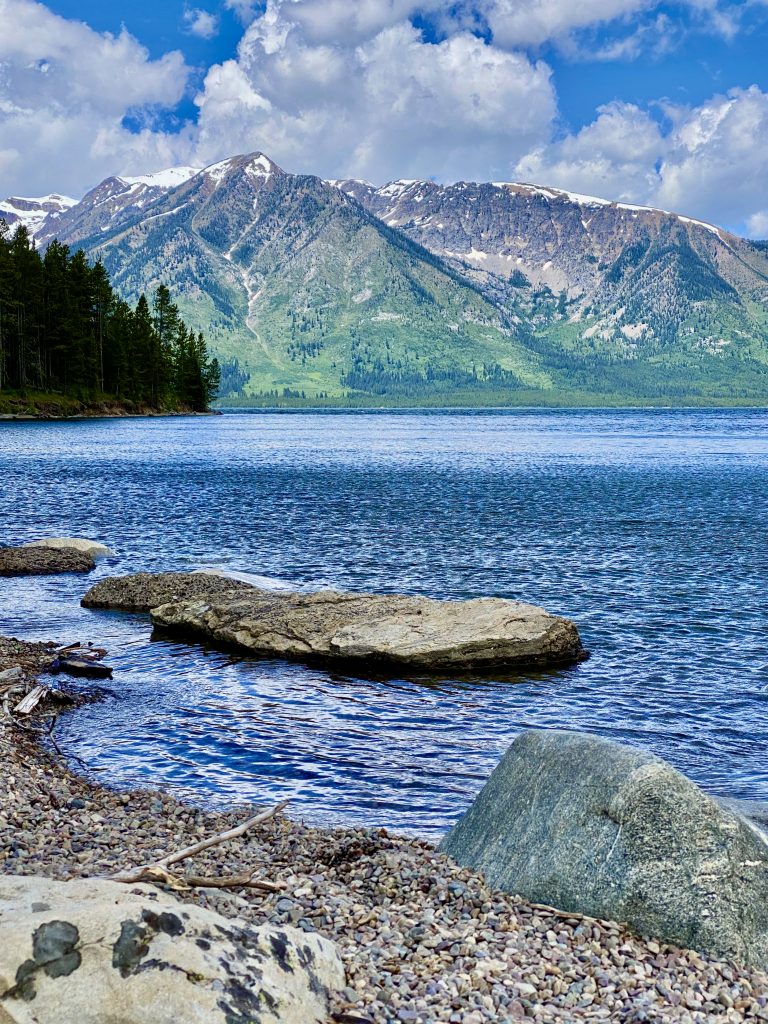 In the afternoon, we drove up Signal Mountain Summit Road, which offered spectacular views of the Tetons. At the summit, Susan noticed someone standing at a spot in the bushes with a good camera on a tripod. He motioned to her and explained that he was standing in “the” spot for the best photo of the Tetons. We chatted with him for a while and learned he was local and had been to the Grand Tetons many times. He gave us some advice about not-to-be-missed hikes.

The mountains were alternately covered by clouds and then bathed in bright sunshine. Three or four times it began to rain from an unsettled sky. We hoped to view wildlife but the weather seemed to be keeping the animals home.

On the way back to the campground, we detoured down a gravel road that led through endless meadows of wildflowers to the shores of the Snake River.

When we arrived back at our campsite, the light rain had ended but the sky was still threatening with thunder rumbling from the high mountains so we quickly made our dinner. We ended up eating inside the truck as it started to rain.

But then, just 15 minutes later, there was a bright blue sky again so we took an after dinner walk to the nearby lake. Twenty minutes after that, the sky darkened again and thunder rumbled as it rained. We’ve been to a lot of places but have never seen the weather change so dramatically so quickly as it did in the Tetons. Even though rain kept coming and going, somehow we never got caught outside in more than a little drizzle.

We were glad we were sleeping inside (the bear warnings posted in the campground solidified that feeling). Throughout the evening the sky darkened, then cleared, then threatened again. It looked to be another rainy night. But the next day was forecast to be much better and we had some great hikes planned.