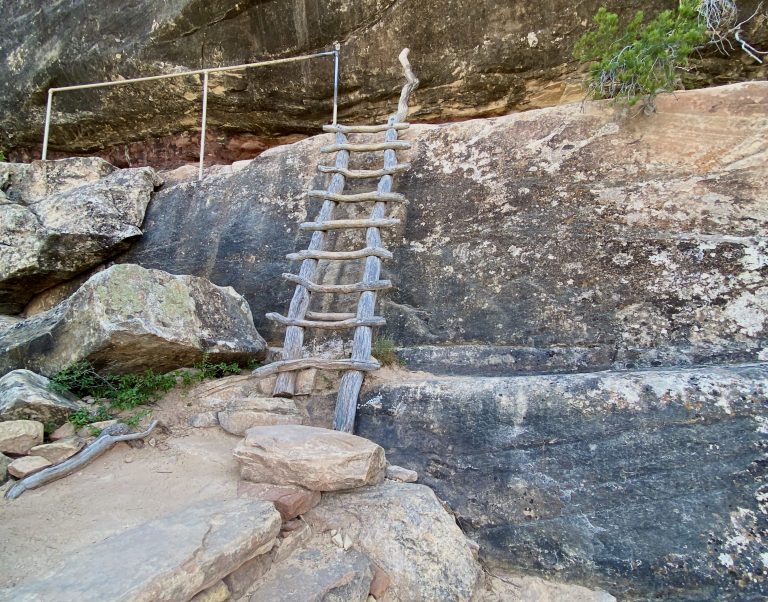 We woke as the sun came up and by 8 am we were in Moab. The two-mile traffic jam from the night before was gone and we found a place to park in town even though it was already filling up. After a decent breakfast and coffee, we strolled around the town.

We came away unimpressed, trying not to compare it to Jackson, Wyoming. Moab was one of the noisiest towns we’d been in. Semis roared through town, loud off-road vehicles and dirt bikes raced up the streets and an occasional bro in his unmuffled diesel truck blasted by. By 8:30 am, the few open restaurants in town had 30-minute waits. Sadly, many of the stores were covid-closed so the town was mostly the few restaurants and a bunch of off-road vehicle rental outfits.

But soon we left behind the crowds and noise as we headed south to Natural Bridges National Monument. Steep canyon walls gave way to rolling desert hills with giant flat-topped mesas in the background.

Shortly after arriving at the park, we came upon the first of the famous bridge formations below the mesa.

Fun fact: Natural bridges are formed by erosion of flowing water, unlike arches which are caused by weathering from wind as well as freezing and thawing of rain and snow.

We were happy to see few people, as Susan had read would be the case. Natural Bridges is one of the least visited parks in Utah. We decided on a hike that would take us down to a giant natural bridge (naturally) at the bottom of a steep canyon.

The hike down was pure delight. Whoever designed the trail was obviously a kid at heart. There were sandstone boulder scrambles, steps cut into the rock, ladders made from tree limbs to descend to more of the trail that wove through willows, hopscotching along more boulders with handholds. Even though the trail at times was along a narrow ledge with huge drop-offs, there was not a danger sign or safety fence to be found. Weird sandstone striations and formations were everywhere.

We felt like a kids at an amusement park, yet the trail was really a steep, 600 feet down filled with fun ways to get there.

There were even the remains of cliff dweller settlements thrown in for good measure.

Once we reached the bottom, we were having so much fun that instead of scrambling back up as planned, we decided to follow another trail that looped through the canyon to the next natural bridge, then up to the top before looping back to our starting point.

The unmaintained trail meandered mostly along the bottom of the canyon for nearly six miles, including a steep hike up at the end. It was ultimately not our best decision.

We’d planned to hike just two and a half miles round-trip to the bottom and back and had brought only one full and one partially full water bottle. And I didn’t bring my daypack pack that had some food, a first aid kit, our PLB (personal locator beacon), extra clothes we might need in case it got chilly as well as regular glasses if it got too dark for sunglasses. In fact, we had nothing but the water, our sun hats, a pocket knife and a park brochure that roughly showed the trail. We had our phones, but the entire park had no cell service. Normally, I tell our daughter Amelia roughly where we’re going and for how long but on this trip I hadn’t. All anyone in the world knew was that we might be somewhere in Utah. Or Nevada. Or Arizona. 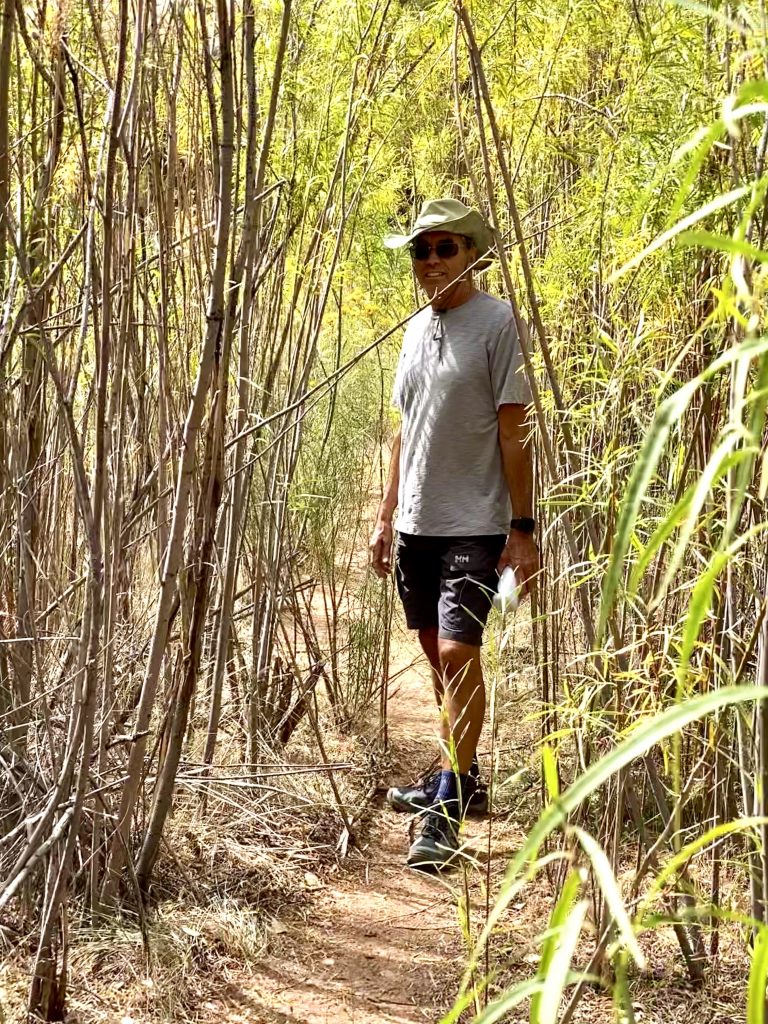 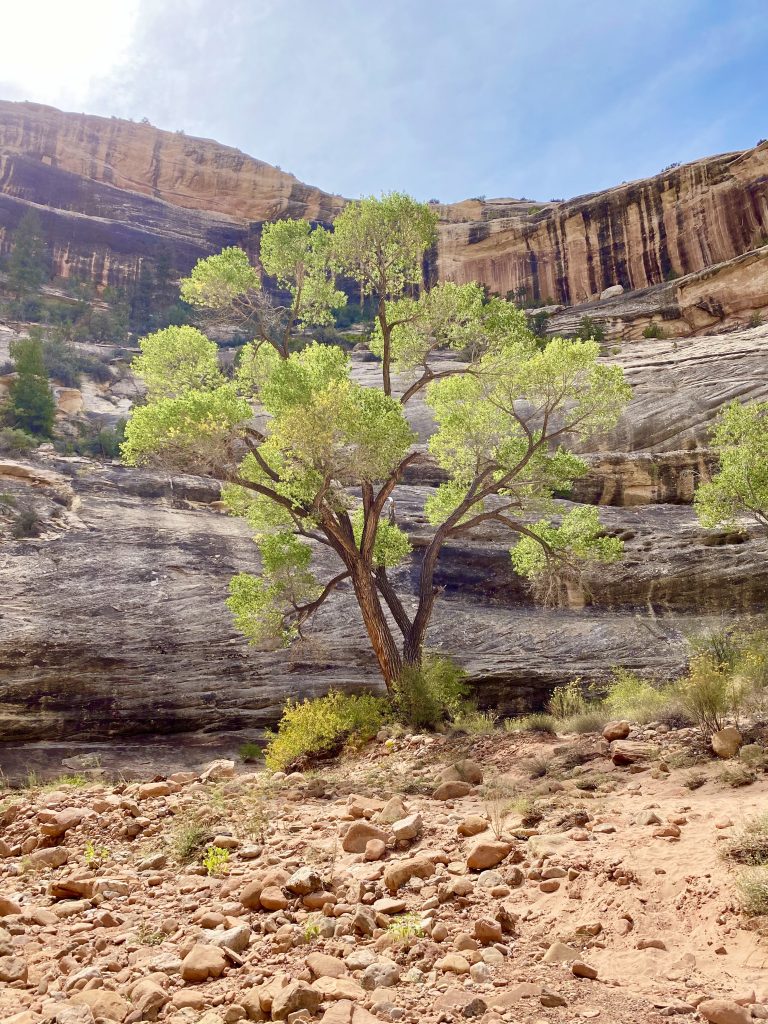 But the hike continued to be spectacular, with 600-foot vertical curved sandstone walls twisting down a mostly sandy gully with some rock scrambles and areas where we had to duck through ten-foot high river willows. It was obviously not a place to get stuck in a thunderstorm as whole dead trees had recently been slammed against boulders or against an occasional stout cottonwood tree.

The going was particularly tough in the thick sugar-fine sand and the hot sun followed us. We’d soon drained one water bottle and it was obvious we wouldn’t have enough to keep hydrated for a few more miles. Plus, we were getting hungry. But the trail was wondrous and around each bend was something new to see and we went from sandy wash to boulder to willow-lined trail back to sandy wash. Soon we were rationing our single water bottle and beginning to wonder if we’d made a bad choice.

The trail eventually led to the second, spectacularly large natural bridge, big enough to drive ten semis over. When we walked under it we felt tiny and awed by such a huge natural structure.

But now the climb back up began and we struggled in the sun, nearly out of water as we slowly made it out of the canyon to the top. Hot, sweaty, thirsty and hungry, we made a grim realization—to get back to the truck we now had to hike back nearly two more miles across the center of the park’s mesa. I recalled seeing a sign that said there was no water anywhere in the park except the visitor center, which was at least four miles away. With no other option, we found the return trail and began the trek north.

The sandy trail through the brush was not well-marked and seemed to go counter to what our (inaccurate) park brochure said and we made a couple of false starts. I started to worry. If either of us got injured or simply couldn’t make it, we had no way to call for help. I knew we were both dehydrated and we occasionally stumbled as we followed the dim sandy trail. We knew that the trail we were on eventually intersected another one that would take us to the truck, but it would still be another mile after that. It was going to be a long mile. When we could, we appreciated the new trail’s scenery of junipers and sagebrush as it meandered along sandy washes and over smooth boulders.

Finally, we could see the road off in the distance that would be near our truck. But to get to it, we’d have to scramble several hundred feet up an enormous steep sandstone hill that some kind soul had marked with cairns—otherwise we may have never found the way up. By now we were down to the last drops of water and trudging mechanically up the hill.

After perhaps twenty more minutes (though it felt like hours), we could see the truck and soon we were refilling our water bottles and draining them. We cracked open a cold juice from the cooler that never tasted better. More water and a snack and we felt human again.

As we sat in the truck we discussed our bad decision and vowed never to do it again. We tend to be spontaneous in our travels and hikes, but it can get us into trouble as it did this day. I glanced in the back of the truck and saw my daypack with all our safety gear and knew I’d never make this kind of mistake again.

Rehydrated and refreshed, if bone weary, we left the park and drove about an hour away to a place where we could camp at an old corral. It was perfect. As we explored the old fences and chutes and ramps, I explained their uses to Susan who wondered how I knew all about corrals. “Texas!” I said, having grown up with our own corrals at an old farmhouse where we’d lived for a time. 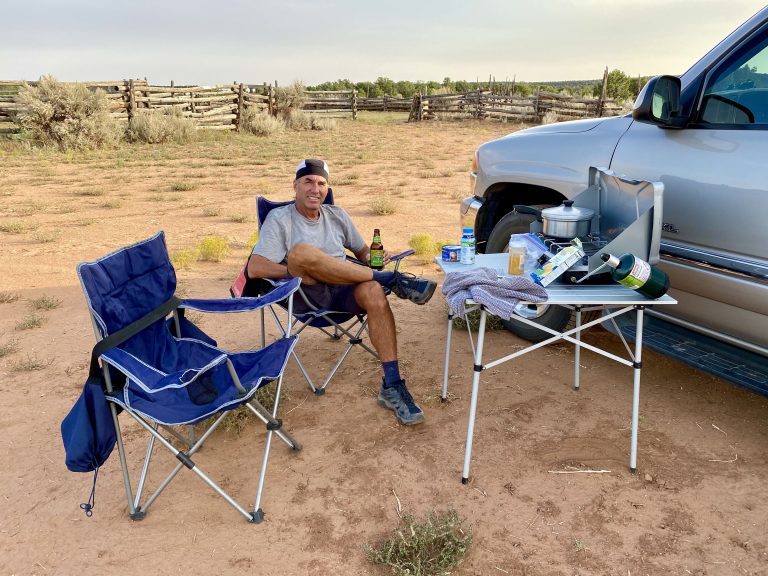 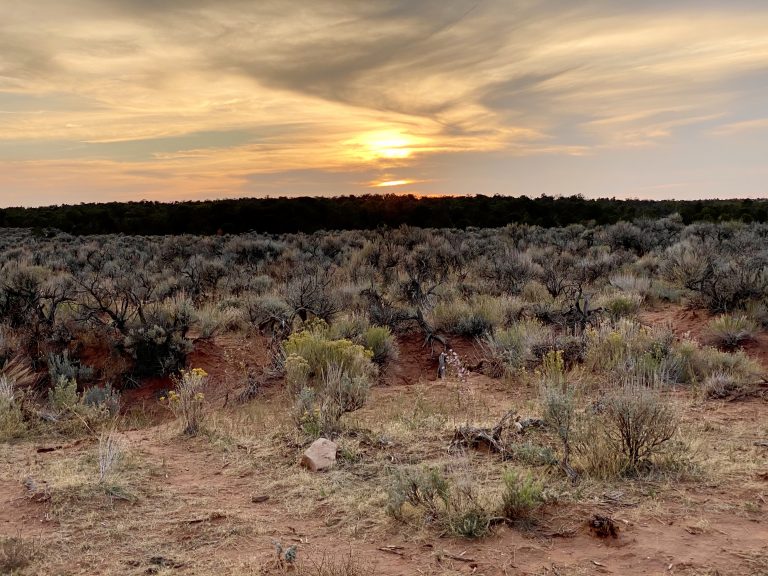 After dinner (we were ravenous but too tired to eat much), we watched the sun go down over the distant mesa. The next day would bring us to what were supposed to be some of the most amazing (and possibly terrifying) roads in the west.

PrevPreviousPost #59: Back to where we started
NextPost #61: Twists and turns of the road and the riverNext