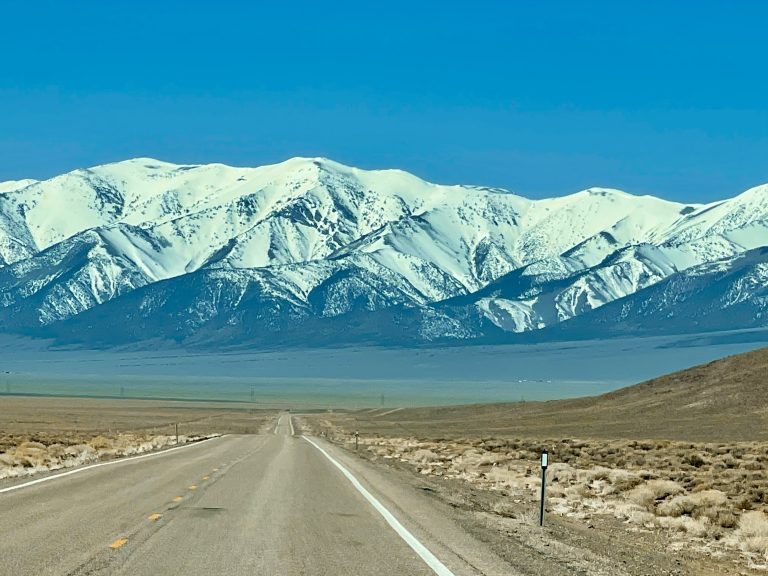 Spring sure starts late at high elevation. Once again, we woke to a very cold morning, this time in the high desert of Utah, about 45 minutes from the Nevada border. Using every blanket we had, we slept almost warmly enough.

The sun rose over the desert in hues of orange on the nearby hills and pink on the distant snow-covered mountains.

Because we didn’t make camp the night before, all we had to do was get dressed and head back down the dusty road to the highway and turn west back onto the Loneliest Road.

I’d woken up a bit achey, so I popped some ibuprofen before starting out on the long drive homeward. I hoped I’d be able to make it all the way home by evening.

When we drove off, we saw that the temperature was below freezing and the truck was covered in frost. But within minutes, the heater was pumping hot air into the cabin.

When we’re camping, Susan usually needs coffee within 20 minutes. I’ve timed it. But today she was mesmerized by the scenery. In many places, it’s hard to take in the view at 75 mph, but the vacant road and open spaces made the speed seem almost relaxing. We’d been on Highway 50 before, but never when the mountains were snow-covered, and the scenery was stunning with lots of wow and lookathat.

After an hour and a half, it quickly became obvious that coffee was necessary. We stopped in Ely, Nevada for caffeine, a quick breakfast and a fill-up.

Crossing Nevada east to west means climbing to 7,000 feet or more to cross a pass in a mountain range, then descending to 5,000 feet along the desert plain, then repeating the climb/descent a half dozen more times. Each climb brought us into the snow, each descent gave us a view of the next mountains an hour away, like a long slow roller coaster.

At one point, we saw antelope along the road and sang (me badly) Home on the Range. With just enough cell signal, we looked up the lyrics because we were pretty certain there were verses aside from the one everyone knows. We proceeded to sing the song way too many times.

Nevada is the seventh largest state by area, but only has about three million people, most of whom live near Las Vegas and Reno, leaving the rest of the state wildly uninhabited. Driving across it is a palate cleanser for the mind, with sparse traffic, few settlements and lots and lots of gorgeous scenery.

Once in a while we’d go through a small settlement of a couple hundred people with many old abandoned buildings, evidence that the towns used to be much bigger, dried up now due mostly to the slowdown in mining. In some cases, the nearest store was a hundred miles away, yet the inhabitants obviously felt the remoteness was worth it. Some towns like Eureka and Austin, once thriving mining communities, were almost entirely ghost towns with a few hardy souls still hanging on.

By noon, we’d reached Sand Mountain at Sand Springs, an old Pony Express stop and now also a BLM-managed Off Highway Vehicle (OHV) site. Sand mountain is just that—a single three-and-a-half-mile-long by one-mile-wide mountain of sand standing 600 feet high. We stopped at the entrance kiosk where the rangers let us in for a brief visit for free.

Cars, trucks and RVs pulling trailers loaded with all manner of ATVs, motorcycles and buggies, many with Trump flags flying, streamed in. The assault to our senses was complete; where we had been on a quiet remote highway, suddenly we were thrust into a frenzy of colorful RVs of every size camping in their tiny square of flat sand, unmuffled noise from a hundred engines, several blaring speakers playing hard rock or country music, exhaust smoke in the air and kiosks with hawkers selling gear and food to the crowd.

We watched as sand buggies of every type and motorcycles with special sand tires climbed hundreds of feet up the steep dunes, some not making it all the way before they zoomed back down. There was a rowdy party atmosphere which seemed so incongruous with our recent travels.

Even though it was a Thursday, the rangers said the coming Easter weekend would be extremely busy. There was a near-constant stream of trucks and RVs streaming in and paying $40 for a couple of days of sand thrills. I’m usually a fan of internal combustion engines, but the scene was so jarring, we shot a few pictures and videos and quickly left.

Just after we turned back onto the Loneliest Road, we passed a long stretch of salt fields. In several spots, people had left massive messages by “writing” with black rocks. Snow plows and wind had obliterated much of the writing and it wasn’t clear quite what the messages said but we figured they were left by people riding the dunes.

Soon, we were back to civilization at Fallon, Nevada, the far outskirts of the population center of Reno. We stopped for gas and met a couple and their teenage son who had a trailer with ATVs, a dirt bike, several large coolers and a variety of gear. They excitedly confirmed they were heading to the sand dune for the holiday weekend.

Thirty minutes later we picked up Interstate 80 and then passed through Reno. Home was about three hours away and at this point I knew I’d be able to make it there. I was still bummed that we’d had to cut the trip short but we’d seen so much and discovered places we knew we’d return to.

As we were leaving Reno, traffic crawled along the interstate for a long time while a major traffic accident was cleared ahead. Everyone drove a little slower after seeing the sobering aftermath.

As Interstate 80 crosses into California, the highway parallels the rushing Truckee River and the high desert scenery is quickly replaced by the snow peaks and evergreens of the Sierra range as it passes north of Lake Tahoe. When the road passed over 7,000-foot-high Donner Pass we got our last views of snow. We’d be home before nightfall.

PrevPreviousPost #96: All you need is gloves
NextPost #98: The vanilla forestNext